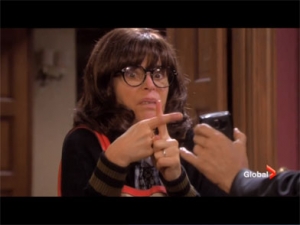 That was quite the slap! (NBC Universal Inc.)

This week was chalk full of drama from Susan’s return to that fabulous cliffhanger Friday. Let’s get right down to it!

“You are mean, mean, mean.”
Susan’s return was the highlight of the week. Whether or not some enjoy the character, there’s no denying that Eileen Davidson is perfection in playing such an opposing role to Kristen. It’s a shame the show waited so long to have her return. Susan was much more confident than she once was and wasn’t as afraid of Kristen this time around though she’s still very much frightened of the “daylight walking vampire,” Stefano. Her making the cross symbol at his voice coming from Kristen’s cell was hysterical. Though it was a nice touch seeing her in scenes with EJ and Sami, Marlena and John, Susan’s scenes with EJ and Sami were interesting. He went from rolling his eyes at seeing her on his doorstep to being protective of her. And while Sami was gracious, the usually warm-hearted Susan sneered at her and insulted her every chance she got. While it was really funny, it was also rude and Slick didn’t even say anything to defend his wife! I guess since it was the first and last time Susan would ever know Sami, they had to make it memorable. We can see how the show’s gearing up for EJ and Sami to leave with the lengthy romantic scenes, all the bloody giggling and tickling (not a fan of that part), and Marlena finally being supportive with Sami.

Can you believe EJ and Sami turned down a chance of a lifetime to have their honeymoon on Susan and Edmond’s pull out sofa?

“I don’t want to be the one to tell you, but…”
Paige eavesdropped on Kayla telling a patient she was raped and instead of keeping it to herself, Doll-baby showed she’s a true Salemite by spreading it around town. Okay, she only told JJ, but of course the timing couldn’t have been better. Abigail’s replacement for Miss Virginity Salem just had to bring up the rape a mere two minutes before she admitted to wanting “more alone time” with him. I don’t even know what to say about that.

Worse…all this talk about rape, it makes me think Eve will set up JJ as a rapist. Please. No.

Incessant arguing.
In last week’s Deconstructing “DOOL” I said, Eve should admit defeat over the JJ and Jill photo scandal. It’s really tiresome to watch Jenn and Eve repeat this same fight over JJ and for no particular reason. JJ’s a good guy. HRH needs to learn to walk in the other direction when Eve comes nearby but it was fun to watch her slap Eve. Jenn’s got pipes! Eve must still be feeling it smart!

As bland as bread and water.
Ben made sure Abigail knew that while he wishes he had enough money to have his own place, he’s been saving for University the whole five months since he’s been in town and almost has enough to go. Tuition must be dirt cheap in Salem. I didn’t catch on to where they went for their afternoon delight – someone’s grandmother’s bedroom? Did Clyde give him the money for that? I thought Clyde’s business was doing better...

Weigh in. Friday's Days Poll: Your thoughts on Abby and Ben making love?

An Art Breslin type of solution.
Clyde must have killed Art Breslin back in Poplar Bluff, in order to take over his business, which is what he appears to have planned for EJ. Something’s brewing. Even Victor heard that Stefano’s been putting out the word not to extend credit to EJ. That’s what you get for turning your back on family when you’re a DiMera!

Disastrous date.
What to say about this? Was the writing clumsy and forced or cute? Everything that could go wrong did, Aiden wore his pasta on his dress pants, the restaurant had a kitchen fire, and instead of ushering the couple out, the waiter offered them Andes Mints and coffee? The entire scene made no sense whatsoever and came off as awkward. The couple could have bought Aiden some new pants and went to another restaurant.

Ejole’s goodbye.
EJ and Nicole had what’s likely their last scene together. They went from one extreme to another in a short time, shooting barbs at each other and then quickly deciding to once again put the past behind them. The spoilers called it a “surprisingly warm moment.” I’m not sure how to feel about it either way but would love to hear your thoughts.

Came to her senses.
Thank goodness for Victor talking sense into Caroline. We saw yet another poignant scene between Caroline and Hope while Caroline conceded that Hope does need to move on. That can’t have been easy to say.

Friday cliffhanger.
What an exciting cliffhanger. John remembered Theresa hit him, and Kristen and Daniel agreed Theresa can’t get away with it. Could this storyline be wrapping up? It feels too perfect which might mean that in true soap opera style, something will get in the way of Theresa getting her just desserts.

Best lines of the week:
Susan to Kristen, “You are the spawn of Satan. Something wicked this way comes, and that would be you.”

Susan, "This place gives me the heebie jeebies."

Susan to Sami, "Look at you, looking like yourself."

Susan, “Vampires walk amongst us during the daylight! Where’s my garlic?”

Stefano, “You half-witted piece of lint!”