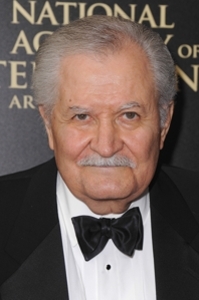 Out to get each other.

In this week’s Throwback Thursday, Soaps.com takes readers back to 1988 when “Days of our Lives'” Victor Kiriakis plotted against his nephew, Justin Kiriakis, in Salem…

Currently, the men of the DiMera family, Stefano, EJ, and Chad, are at odds with one another in Salem, but back then, Victor plotted to pass off Justin’s child as his own. Justin and Victor had fought previously, but Justin moved back into the Kiriakis mansion to run the empire after Victor was shot. During this time, Angelica Deveraux became pregnant and Victor suspected it was Justin’s baby. Victor proposed to her, hoping to marry and pass the child off as his own. Things didn’t play out the way he’d hoped, and Angelica stunned Victor by marrying Neil Curtis instead. An outraged Victor ruined Neil by luring him back into gambling, and Angelica left him. However, she then set her sights on Justin, much to Victor’s chagrin. In another act of sabotage, Victor took to drugging Justin to make him impotent.

When Justin found out, he took action to get back at his Uncle Victor. Do you remember what he did? Please post your answer from the selections below in the comment section.

Justin struck back at Victor by:

– Causing a PR nightmare at Titan.
– Paying Victor’s henchman to gaslight him.
– Hiring a hooker to pose as a wealthy baroness and seduce him.
– Handing over the Toscano treasure to Steve and Kayla.
– Exposing Victor for kidnapping Diana Colville.

Read Soaps.com's Deconstructing DOOL weekly blog for thoughts on the Chad recast, and then check out Soaps.com's interview with Billy Flynn in which the actor says, "He wants to take over."

Days of our Lives Spoiler Video: Did...

Days of our Lives Fan Event In...