Max and Chelsea: Well, Chelsea found out Max applied for Med School and didn’t even tell her. That this says a lot about their relationship, which is being written as more of a friendship.

Nicole/Chloe/Mia: Nicole was really manipulative with Mia. It impressed me, how devious she can be, but I was even more impressed that Mia caught on to her so quickly. I do like that Mia, but she looked strung out when she showed up at the wedding. Did you notice that or does that happen Monday? I get confused!

Steph/Philly: I loved their sexy, romantic hotel scene. I enjoyed them together, for once, and then (SPOILER) Signor Masi, killer extraordinaire, shot my Philly in the chest. As if the Kiriakis’ aren’t going to know that the DiMera’s planned this! Stefano thinks they’re being so sneaky, but they’re really being quite moronic. Oh but it’s not the DiMera’s fault that they’re not written properly, now, is it? No wonder people make fun of soaps. I just think that they could have gone so many other ways with the writing of this. Maybe on EJ and Nicole’s honeymoon, they could have had Stefano go off to Italy, and Signor Masi do the deed then. At least it would have looked a little better. Everyone’s out of town. If they made it look like an accident, that’d have been even better. This is so obvious! Stefano… look out.

Bope/Roman: This week, Bo’s vision came to pass, but it wasn’t what he expected. We ALL hope that this has put an end to this horrible storyline with the anti-climactic ending, but unfortunately, we’re in for another vision during May Sweeps. Oh bore. My big beef with this one was Hope’s reaction to Roman, when she burned her hand at the Hacienda Hotel (sounds like a dive). Roman tried to examine her hand and she yelled at him, “Don’t touch me!” I didn’t understand why she would be afraid of him touching her. Sure, she knew he was the man in Bo’s vision, but if she’s not attracted to Roman, what’s the issue? I just didn’t get it, couldn’t get into it and am not happy that this isn’t the end to the visions.

Kate/Princess Chloe/Lucas/Daniel: Wow. I can’t stand ‘Chris’, Kate’s uber annoying assistant who talks a million words per minute. Please never let him return. I type about 120 words per minute and I couldn’t make out what he said, let alone type it. All I caught was that there was a fire at Kate’s studio. Why? I don’t mean why was there a fire. I know he told her why, though I didn’t catch that, but did they have a fire so that they could utilize Maggie’s set, Chez Rouge, instead of creating another? Just seemed a little strange to me. Anyway, Kate hired the little opera diva for a job, she signed a contract and already, Chloe’s reneging on it? Who does she think she is? She accepted the job, she signed and she’d better damned well do her job! It’s not like it was a favour to Kate! I was appalled at how disrespectful Chloe was being to an employer, mother-in-law or not!

That's all, folks. I'm urging everyone to watch Monday's episode, which is exciting! Until then, have a great weekend, interrupt a wedding and catch me on Facebook! 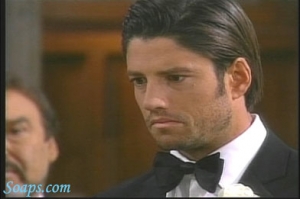 Lots of flashing back this week and some great scenes. This week we geared up to the Ecole wedding that I for one, thought wasn’t going to happen!

Ecole Wedding: Nicole received something borrowed, something blue, something old and something new from her family, who we haven’t heard from in years. It would have been better for me if Fay and Brandon would have called. Nicole’s bracelet from Chloe broke and she saw that as an omen for bad things to come. They did. All those interruptions during the wedding were annoying. The wedding dragged on, like any Catholic wedding does and Lexi’s scripture read was off the wall (you’ll hear it Monday). Did anyone notice EJ’s facial expressions when marrying Nicole? He grimaced, mostly, while Stefano waited for word on Philip’s shooting, from his goon. Not exactly a fairy-tale wedding. Mia and Dr. Baker and Brady all made appearances, much to EJ’s dismay and next week, Sami, too, will interrupt. (Desperate wench, get a J O B.)

Brady/Nicole/Melanie: (Spoilers in this paragraph.) Melanie unselfishly advised Brady to come clean with his feelings for Nicole, this week, but then next week we’ll find she’ll feel guilty about it, when Brady is found beaten. These two made out, twice this week. She’s attracted to him and generally looking for an ounce of love or friendship, but he’s just vulnerable and in love with Nicole, so we know this isn’t going anywhere. I do like Brady with Nicole. Sparks flew during a few of their conversations at the pier and at the cabin and they almost kissed a few times. Melanie’s scenes were entertaining and I find myself wondering where she’ll fit in once Max and Chelsea are gone. There’s nobody her age, anymore, aside from Stephanie, and it’s not like they’re best buds! Incidentally, look for a Molly Burnett interview on Soaps.com, soon, all you Mel fans!

Rafe/Sami: This week Rafe and Sami had another tiff and he left her. I see a pattern, but I can understand how he feels, considering he cares about Sami and is worried she’s still in love with EJ. Run, Rafe! Rafe, a guy who wants to get out of Sami’s life, returned her St. Anne medallion, in person. Made me roll my eyes. If he really wanted out of her life, he’d have sent it by mail. We know he’ll be back! Sami told Lucas the truth about Grace’s paternity and he assumed she was still in love with EJ, and that’s why she wanted to tell him before he married Nicole. Sure, could be true, though I do think she cares a lot for Rafe. Still, she may just not want Nicole to marry EJ, because she hates her. Who can tell? Who the hell cares? Sami should stop focusing on her lies and other people’s marriages and start focusing on her own horrible life and making money. I’m starting to think of her the way I do Octomom. 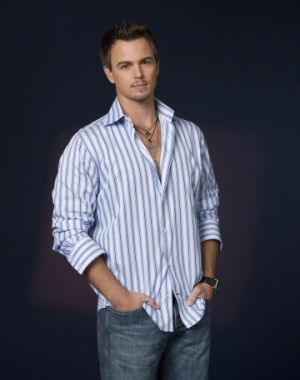 Roy Vongtama coming to Days of our Lives as Dr. Richman! 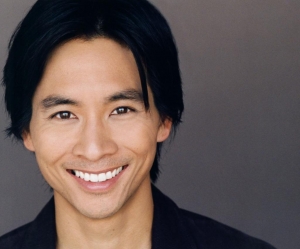