There’s nothing half-assed about Anne!
It’s good to see Anne in a scene with someone other than Daniel or Theresa. Anne stumbled upon Aiden drinking and her attempt to throw herself at him didn’t quite go her way. “I’ll do just about anything with just about anyone. If you get my drift. Well, maybe not anyone or anything but...pretty close.” We’ve never seen Aiden move so fast! Matt of Matt’s “DOOL” Musings said of the scene, “My Anne, keeping it classy.”

Aiden ran of course right into Hope trying to fix him up with her cousin. All lubed up from that one glass of wine, he finally gave in to his feelings and planted one on the cop. There's no going back now!

Did she go too far?
Nicole and Sami’s spat was pretty good. Sami threatened Nicole’s life, “You’re dead meat!” and Nicole wondered why Sami’s kids weren’t 'motherless' yet, and crying themselves to sleep at night since she has a target on her back. Sami looked petrified at the thought. Ouch. Maybe it was a low blow but Sami delivers the most low blows in town. She can handle it!

I spy.
Who is the creeper taking photos of oiled up JJ and Paige making out in their bathing suits at the lake?

Uh oh.
John’s storyline just got real. This experimental drug business is what lured me into watching “Days” in the first place. Classic. Stefano and Kristen have an experimental drug made by Dr. Rolf or someone similar which will either bring John out of his coma or do something crazy to him. Hopefully he comes out of the coma a different person. That could be fun. Last week in Deconstructing "DOOL" Matt said, Kristen probably has a backup of John's old brain and she'll use that as her bargaining chip.

The sophisticate meets the hillbilly.
EJ met Clyde. This can’t be good. From everything we’re hearing about Clyde, EJ might actually have a worthwhile adversary in Clyde.

Have a great weekend! Leave me a comment or two on your own thoughts of the week.

Theresa, “They're supposed to be shipping John off to the vegetable farm today.”

Kate, "Maybe we should stop whistling past the graveyard." 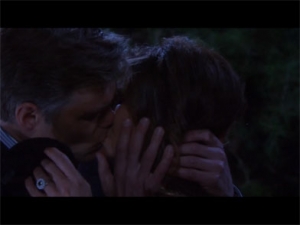 This was a short week in Salem, and it was all cleavage, all the time. It was hard to focus on what actually went down, when we were busy trying to figure out whose cleavage was the most impressive…

Crayola.
It’s anyone’s guess whether or not Marlena showed cleavage because we were temporarily blinded by her 80s staggering new car blue blouse and laser lemon coloured blazer brought to you by the manufacturers of Crayola Crayons.

One step backward.
Kristen really got Brady hot under the collar. Hot enough for him to make a boo boo and get carnal with Theresa again. I actually felt bad for Theresa, knowing Brady was basically using her as a substitute for Kristen. And who thinks Theresa’s now knocked up? Vote! It’s a scary thought because she’s so selfish and self-centered and can barely take care of herself. Is it too far-fetched to think they could use a baby storyline to force her to grow up and think about someone other than herself? Just a wee bit?

On top of Krissy’s busy schedule manipulating her arch nemeses, she’s a step above Theresa in the self-centered department. She actually looked out for old pal Jennifer. She doesn’t even know what happened between Daniel and Jennifer but sees Daniel as cold and “super stupid” for not forgiving HRH. It’s peculiar that it took Kristen of all people to get Daniel to thaw and call Jenn for a coffee date. It was really sweet but feels like we’re going backwards considering nothing has changed with these two.

Where there’s a will, there’s a way!
Kristen didn’t let a silly little anklet stop her from ensuring she was fashionable. She must have rolled those stockings up underneath the anklet. That or the anklet is easy to remove and doesn’t really work… How is it that she isn’t confined to her hotel room?

Dear Days writers: Enough, please.
Nicole needs to stop manipulating Eric and Daniel into caring about her again, find some self-respect and give them space. That and the ex-priest who preached forgiveness needs to learn how to practice what he preached. Maybe he’ll learn something from Brady and Will. Heck, even Abigail slightly thawed toward Will this week.

Sex vs making love.
Some fans are tired of the lack of intimacy in the sex scenes but sofa’s aren’t just for sitting and showers aren’t just for cleaning up! What people do in the privacy of their homes…

Days of our Lives Spoiler Video: Some Kind Of Delay