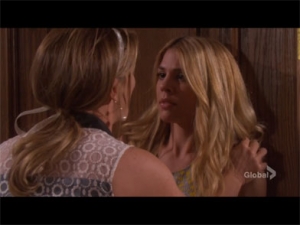 What's she up to? (NBC Universal Inc.)

A little romance played out this week in the midst of the blackmail and revenge plots. The misogynistic names reared their ugly heads with more than one player, and the pace was still rather slow.

Oh so hokey!
Aiden was a little hokey this week with Hopey. The scene of him rubbing her leg should have been sexy and had us wanting more but the clumsy dialogue made things awkward. This is twice now which doesn’t bode well considering these two are obviously going to be put together.

Smack!
We seem to have come to a climax with the adultery storyline when Abigail slapped Sami across the face and fought back with a little blackmail of her own. Matt of Matt’s Musings said, “I saw the Sami-Abby brawl and it was pretty weak. Abs should have pumped some iron with her mom before heading over.” Yep. It was as weak as the Nicole and Kristen “confrontation” last week. But it did work in putting an end to Sami going after Abigail. I think. It’ll give Sami a chance to focus on her feelings and EJ and whether or not she wants to be with him instead of focusing on the other woman, which kept her right back in the moment she learned of EJ’s betrayal. Good way to move the story forward. Most romantic line of the week goes to EJ, “I would like to earn the right to hold your hand.” Things look as though they’ve thawed in their relationship, unless this is part of her plan.

Glorified barista.
Though it wasn’t written into the actual show so the viewers could catch on as to how Will was actually feeling, we can now see that he has always felt insecure and envious of Sonny’s confidence and self-assuredness. We only know this because he lashed out at Sonny, calling him a glorified barista, when he learned he only got the job at True Vista because of Victor and Sonny. He’s been acting like Sami. In last week’s Deconstructing “DOOL” I said, It’s pretty bad when even EJ DiMera of all people calls you a snake. This week Will was petulant and jealous. It’s not a good look for him. My first reaction to his outburst was to think of him as an ungrateful little pissant but this is his own insecurity coming out and I’m pretty sure he didn’t mean to be a jackarse. I’m not a fan of not knowing how the character feels. How can we invest or find the story believable unless we know exactly how each of them is feeling?

Some are saying Will was used but that’s business and Will was a commodity to True Vista. That’s real life. Abigail sure let him have it by shaming him and reminding him she stood up for him at his wedding, yet he screwed her over for a mere three grand. Shameful. Even if Sami didn’t give True Vista Abigail’s name, Will did in other ways. It was unforgiveable. At least he had Tad to talk to about the mess.

Maggie was quick to forgive Victor. And truly, it was hard to fault her for it. Their scene was sweet and loving and just what we needed to see after weeks of misery.

Was that Julie?
Julie returned from a yoga cruise with her inner eye opened and suddenly she’s no longer a hypocrite. I like it. It works. It’s good to have her back and not the pesky meddlesome witch that nobody liked. What a great scene with her and Kate and then surprising EJ with no lecture.

Paige’s daddy.
We’re back on wondering who Paige’s dad is. Do we rule out Jack because if it was, Eve would have gone after his estate for even more money? Could it be Frankie? Wouldn’t JJ know what Frankie looks like from Jenn’s yearbook? Or was it Mr. Larson? Or maybe Paige just thinks it’s Mr. Larson but it really is Frankie. Or…maybe it’s somebody else. Maybe somebody in Salem. Vote to let Soaps.com know who Paige’s daddy is!

The fine line between love and hate... or at least lust.
Eric’s putting an awful lot of effort into seething, gritting his teeth and flashing Nicole “I hate you but want to do you” eyes. He’s trying too hard. Nicole figured it out and told him, “You don’t know what the hell you want.” True. He needs to get a handle on his emotions and figure it out soon. His bitterness is getting old and doesn’t become him. Plus, this storyline has played out and fans just want to move on.

Speaking of the fine line, what’s up with Abigail kissing Ben and thinking of EJ? Very interesting...

What’ll become of John and his eyebrow?
Finally, Kristen got a chance to talk to Brady, which would have been nice to have happened the first week she returned. He needed that closure but she still gets under his skin. Maybe he’s still in love…Kristen thinks she’ll get him back by ‘fixing’ John. Matt Of SOF Matt’s Musings says, “She probably has a backup of his old brain and she'll use that as her bargaining chip.”

Go Jenn!
HRH Jenn Jenn gave Theresa a piece of her mind. She put the one-dimensional younger woman in her place saying it’s pretty sad that the only satisfaction she gets in life was to spread bitterness and doom. True. But what was the point of the conversation? It’s not as though it’s going to be enough to give Theresa pause about her behaviour.

Eve.
It took until last week for me to start feeling Eve but this week she went back to being annoying. Like her sister Theresa, Eve has no depth. She’s also just plain weird, throwing herself at unavailable men, creeping them and us out, and her focus on breaking up JJ and Paige is just senseless. It’s as plain as day that he’s a good guy. She knows it too, so what’s the point?

Bulls-eye.
With the sketchy business, his creepy interest in Ben’s “cute little Abigail,” and Jordan’s relationship, Clyde’s quickly getting more interesting. Creepier, too. One moment he makes our skin crawl and the next, we may be excited about the possibility of him having a thing with Kate. Bizarre!

Kristen, “It comes down to being a really stupid, terrible understanding.” Brady, “You thought he wanted to be beat up? Did you use the same guys that you used on me?”