Get the scoop on Days of our Lives' Kami portrait, and then read about soap veteran Michael Dietz's new game show The Line and more in Soaps.com's Soap Opera Actors: Where Are They Now?

In this week’s Throwback Thursday poll, Soaps.com takes readers back to 1990 when “Days of our Lives'” Isabella Toscano accidentally killed her sister Marina…

Though there’s tension and mistrust between these sisters, Theresa and Eve Donovan are currently making a go of being civil now that they’re both in Salem, but back then Marina Toscano had her sister Isabella locked up in an asylum to keep her from telling their father that Marina was searching for the Toscano family treasure. Isabella managed to escape one night and confronted her sister in her hotel room. Marina pulled a firearm on Isabella and a struggle ensued. Marina hit her head on a nightstand and was killed accidentally.

Traumatized, Isabella returned to the asylum and blocked the incident out of her mind. Later, Jack Deveraux helped Isabella bust out of the asylum and hid her in his loft. Meanwhile, Kayla Johnson, who had had an altercation with Marina on the same night as Isabella, was convicted of her murder. A disbelieving Isabella set out to uncover the truth about Marina’s death with the help of Roman Brady (John Black).

Eventually, Isabella remembered that she had killed Marina. Do you recall what triggered her memory? Vote in our “Days” poll:

Days of our Lives Spoiler Video: No Way Love 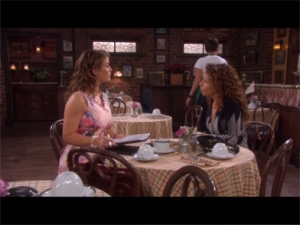