Victor apologized This came out of nowhere. He apologized to Philly for pressuring him, which was great, but I thought it came too soon, and would have liked to have seen more soul searching. A lot of stuff happens off screen these days, too. Kate must have forgiven Victor for kicking Philly out of the house and Titan, because she not only is still living there, but she is on speaking terms with him. When did that happen? Why does the show suddenly feel as though it’s been written in warp speed?

Steph and Philly These poor dears have sexual bad timing, and they need somebody to tell them that answering the phone or door during nookie is a no-no! I can’t figure Stepfordanie out. Wednesday, she breaks up with my Philly, then when he tells her she’s starting to sound like the boy who cried wolf, (I laughed out loud.) Steph cries and accuses him of giving up on them. Er. Didn’t she give up on them first, by dumping him? Again? Shouldn’t she love her man for who he is, instead of trying to change him? I’m confused. (coughconvolutedcough) Everyone keeps commenting on Philly no longer limping due to having an artificial leg. Funny, isn’t it? It doesn’t bother me, though. Can you imagine how his hip would hurt after faking this limp for years on the show?

Stephanie had on a red dress circa 1970s. See the photo, along with one from the 1970's? I’m not sure if Californians have brought back this style, or if the wardrobe team is trying to make her appear like a Stepford Wife on purpose, but it’s amusing. She really is applying for the wife role. Don’t be surprised if Philly pops the question soon. I won’t remark on Stephanie’s new alien-hair head look, *smirk* but I will say that she was much more hip when she arrived in Salem. Such a beautiful actress – why not make her look hawt?

Sami/EJ/Nicole/Rafe Rafe gives Sami’s kid lectures, lets himself into Sami’s home with his own key and buys her groceries. Warp speed. Next thing you know, they’ll be in bed. *wink* Oh. Actually, that should happen first, before the lectures, key and the grocery lists, donchathink? He walked out on Sami, again! Is it something in the water? I was glad he returned Friday and apologized. I thought it was up to Sami to make the decision about Grace. Interesting that Nicole saw Rafe and recognized him. I think this is what will force EJ to realize she’s not ‘against the family code’, once she spills this info to Stefano and EJ.

Samanther and EJ shared a moment at the manse, when she tried to comfort him about Tony’s death. Did you notice the dialogue was almost exact, from the last two scenes they shared a moment at the manse? Sure you did. Here’s the thread about it. Really great thoughts by our posters. Recycled dialogue doesn’t give the characters growth and that’s what I want to see with these two. Luckily, the scene went from recycled to great, the moment Stefano waltzed into the room, ranting and raving about Philly being responsible for Tony’s death. Sami, EJ and Stefano had the best scene of the week. Sami stood up to Stefano, reminding me why I loved her, and giving me hope that they’ll stop writing in the crying jags. Did you love that scene with Johnny? As I mentioned in my spoilers Monday, Alison Sweeney said on Twitter, that Johnny was adlibbing, asking EJ how work was! How adorable is he? Alison Tweeted, "James & I had to totally wing it when he was adlibbing."

Why the hell does Nicole want to marry EJ still? I was glad that she confessed to Chloe that she was wondering the same thing. Where is her family right now? Couldn’t she have received a call from Brandon at least? Somebody’s got to knock sense into this woman - heck, she has started drinking again!

Chloe/Lucas/Daniel Who says Daniel and Chloe are over? The way these two can’t keep their eyes of each other makes me wonder how long this marriage between Lucas and Chloe will last. That being said, whoever is writing for Chloe and Lucas is doing a good job. I see them as a real couple, with real issues to discuss. I like when they’re on. I think I’m starting to like them together. Do you feel the same, or no? They have more to discuss than Bope, Chax, Ejole and a Safe. It’s also really good to see Maggie and Chloe, as well as Maggie and Daniel, getting along. Poor Daniel. His date gave him the heave ho, before they even got to have a drink. I’d like to see him date.

What else? Melanie was amusing this week, with her new job and interactions with patients. I enjoyed her lighthearted scenes, though she was only seen momentarily. She’s been busy with her new gig, in the HBO series, True Blood.

For those who haven’t visited our news room this week, we interviewed Alison Sweeney - check that out here and another one about her allergies, right here.

I’m sure there was a lot that happened that I didn’t touch base on, so I hope to hear from all of you, with your own thoughts. Have a terrific weekend take a page out of Stefano’s notebook and implant a chip in somebody’s brain, or their tooth, for mind-control...ah those were the "Days!" Ridiculous, but amusing!

Credit: The light seems to have faded.

Two weeks ago, the theme of the week was “Disowned,” and this week it was “Walking out!” EJ walked out on Nicole twice, Rafe walked out on Sami once (almost twice) and Steph forced Philly to walk out on her!

Guiding Light was canceled April 1st, causing us all to take a look at the soaps as a genre, especially those not doing well. Just watching the shows to keep it going isn’t enough. I also think the onus is on the writers to start digging deeper into those characters and giving us much more interesting storylines. This show is going to be all about the newbies within the next few months, which concerns me. Change in soaps is scary for soap fans and one of the best ways to ditch your own soap is to get rid of the vets that everyone adores and bring in characters we don’t care about. I fear for the genre as a whole, not just because it’s been around for eons and it would be sad to see it go, but because people would be out of work, including myself! (Yeah, it’s all about me. It would be all about you if you worked in this industry, too!)

I learned something, just for you. A few weeks ago I had a question regarding the set usage, and I learned the reason why the sets are recycled on certain days is because it takes time and of course money, to knock down a set and rebuild it, and due to lack of studio space, they try to get as much use out of them as they can. Makes perfect sense! When I went on my Y&R set visit, only a few sets were up, and there were a few that I didn’t even recognize – The Athletic Club was one. I guess the small size of it didn’t help with recognition!

Onward to my thoughts of the week…

Max/Chelsea We see less and less of Max and I just found out that he’s leaving the show in May. His movie got picked up. Have you guys noticed that something is ‘off’ about Chelsea lately? It’s like she’s already gone. The light is out in her eyes and she seems depressed or indifferent.

Poll I polled “Is EJ right about Nicole betraying the code?” and at the time of writing this, 70% said, “No, she did the right thing.” I was a little concerned that there were 6% who actually said they thought Nicole should do whatever EJ wanted. Please tell me you were joking. She needs to do what is right, regardless of “the code.”

Dr. Baker returned Monday, much to my chagrin. He’s so scummy! His and Nic’s scenes make me feel as though I need a shower, though I really liked his chat with sweet Mia at Java Café.

Mia/Will The bonding she felt with Grace was classic soap that made me feel as though the writers were smoking crack. Okay, that’s harsh, but I dislike those storylines. I’d prefer her to have no clue at all and be shocked out of her mind, when it comes out! Mia and Will are becoming more comfortable with each other. Are they the new Belle and Shawn? Mill? Wia?

Stefano cries? I told my husband this today that Stefano cried and he said, “What? Yeah, right! Stefano would never cry. Are you kidding me?” Exactly. Is he getting older? Softer? To me, Stefano would never cry. He’s got no heart and that’s why I like him. Not my favourite moment of the year, but at least Stefano turned his tears into revenge, as Stefano should! He’s in denial and playing the blame game in order to keep his sanity. If he didn’t have Philly as a scapegoat, he’d have to face up to the facts that he’s partially to blame, along with Tony, Philly and Mel. Course, it was just an accident, and revenge isn’t going to bring him back. What are your thoughts on this sudden mobsteresque storyline? Stefano was never a mobster. If I wanted to watch Mafioso storylines I’d watch General Hospital. EJ’s becoming more hateful as the weeks progress, too, and it’s a complete turn off to me, as a feminist woman. Though I like him very dark, I miss the charm that used to go with it. Did you laugh at how nuts he went at the pier? I have an interesting sense of humour, so found that pier scene amusing. If I were Chelsea, Max would have had to hold me back from smacking a good one across his smug face. (James is a good actor!) 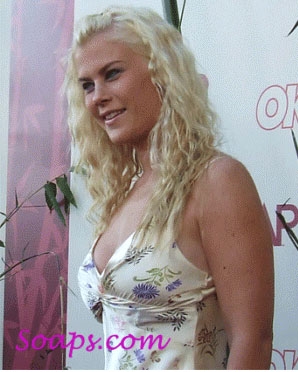 Alison Sweeney Talks About Days of our Lives With Soaps.com!