Eve.
It looks as though Paige is a good kid despite Eve’s... quirks. Twice we’ve seen her use Paige to further her own agenda. Once she tried it with Jennifer in order to get her to drop the lawsuit and then Friday in order to get back in Daniel’s good graces. It was surprisingly a poignant moment though when Eve told her daughter not to do something she’s not comfortable with just to get a man. That spoke volumes and was a good start for viewers to see Eve as more than one dimensional, but did this happen just to further the next scene with JJ and Paige half naked on Alice Horton’s sofa, making out? These are words I never thought I’d write. Anyway, Theresa told JJ to stop and he didn’t. He gave her two reasons why he didn’t stop. He said he didn’t hear her and that he’s a guy and it's difficult to stop when he was so ‘into it’? I don’t know what to think about that scene. It all happened so fast even though I watched it twice. The latter excuse was pretty lame. It’s as bad as ‘I can die if I don’t do it’! When JJ glanced at his dad’s photo we all thought about Jack raping Kayla. If Eve finds out, she could use it to blackmail Jenn into giving her what she wants out of the lawsuit.

The Vatican, really?
Is the Pope going to make a guest appearance on “Days?” It’s hard to believe they’re going there and sending Nicole and Eric to the Vatican in order to clear Eric’s name. Honestly, most just really want his name cleared already so they can move on with or without each other. Eric really has suffered enough.

Aiden’s past.
Aiden’s past is coming out at a good pace. During his discussion with JJ, we caught a glimpse that his relationship with his wife was complicated. Perhaps they had a bitter divorce before her passing or maybe, because a fan pointed out that he doesn’t drink, a drunk driver killed her. He told his son he didn’t miss her beach house which was intriguing. We also learned that he’s wealthy, he doesn’t need to work, and he let Jenn know her case keeps him out of trouble. What does it all mean? Who was his wife and what happened to them?

Poor Hope is trying to come to grips with some feelings that are stirring up between her and Aiden while the kids are trying to make plans together. It’s being written really well. It’s being told at a great pace likely out of respect for Bo and Hope’s past but not too slow for viewers to become bored with it.

Have a terrific weekend everyone. Please feel free to leave a comment or three about your own thoughts of this week's Salem happenings.

Aiden, “I must have been watching too many episodes of 'The Real Housewives'.

Will, "You and EJ implode every six months with no help from anybody."

Johnny, “Abigail’s cupcakes are so good. You said they were the best you've ever had." 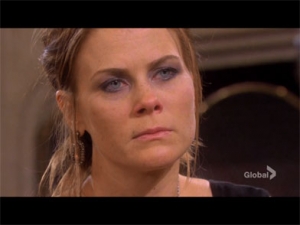 We saw some good solid drama this week in Salem. Without further ado… the blog.

Abigail’s cupcakes bring all the boys to the yard.
Many fans just like Will are calling Sami out for being a hypocrite because she cheated on Rafe with EJ so this makes her as bad as EJ for cheating on her with Abigail. What do you think? Days Poll: Is Sami being a hypocrite? Perhaps she is a little hypocritical but it doesn’t make it any better and doesn’t make it feel any less painful for her. Even if Sami cheated on Rafe 394 times, it still doesn’t make EJ cheating on her once, twice, or three times (yeah nobody remembers that hospital closet scene) easier! She’s still entitled to be pissed though she’s gone way beyond pissed and entered psycho mode a long time ago. Her talk with Caroline was the highlight of the week. It’s always great seeing Caroline impart wisdom with anyone but especially considering she was once in EJ’s shoes. It had Sami softening toward EJ until Johnny interrupted the moment to talk about how much daddy loved Abigail’s “cupcakes.” Ouch. It sent Sami back into psycho-mode. It was pretty riveting overall.

I’m unclear on a few things: Sami called cheating on Rafe completely different than what EJ did to her with Abby. The motives were different but the outcome was the same. As well, Sami seemed almost gleeful that Rafe cheated on Jordan with Kate, which is highly unusual for someone who is still smarting from having her fiancé cheat on her. It made no sense. Lastly, why is nobody in Salem disgusted with Abigail for being a home wrecker? Not even Sami’s own son is on her side! Will and Sami’s fight scene was fantastic. Everything that many fans wanted to say, Will said for them, but he was also completely disrespectful and callous about Sami’s betrayal. The fight really showcased Guy Wilson’s and of course Ali Sweeney’s acting chops and that slap? Ouch!

SPD strikes again.
Abe started feeding Theresa forensic details on the case and in turn, she changed her story according to whatever evidence was given. Wow. Just wow. I know the Salem Police Department generally has issues knowing their heads from a hole in the ground but Abe really blew it this time. They’ll have to get Rafe on the case. It’s plain to see by the evidence gathered that Brady couldn’t have possibly hit John as Theresa said but we’ll see if they ignore the evidence as usual. At least Victor and Daniel know what Theresa’s about. Maybe one of them will out her. I can’t figure out how Theresa will get out of this. If John wakes up, she’s done. If John dies, she may keep her secret unless, as I suggested last week in Deconstructing DOOL, Victor has cameras installed in his living room.

Comatose.
It’s rather soon after Rafe came out of his own coma for John to be in one. Some viewers felt the show didn’t know what to do with John so they did this. I’m not sure it’s that cut and dry. Maybe there are behind-the-scenes extenuating circumstances for him to be off canvas or maybe it’s just part of the story to come which will get Brady back on track with fighting his demons and winning, of course, after we watch him go through some heartache. Maggie and Brady’s scene at John’s bedside was touching. It’s good to see Brady finally not tempted by drugs or alcohol… or Theresa! Something tells me Eve’s going to find out her secret and blackmail her into… something or other.

Days of our Lives Saturday Teaser Poll: Will Strikes Back