Taking responsibility.
Good for Abigail for taking responsibility for doing another girl’s man. It’s the least she could do! Her joke about Sami and Carrie having something in common hating on her was pretty funny. It’s taking the focus off her and putting it directly upon the couple where it should be. Though... did you all smirk watching her make that scene with Eve in the Horton square? She was out of her right mind. Wait until Eve learns she had an affair with Sami’s fiancé. Eve will have a chance to throw all that back in her face.

Miss Suzy Cream Cheese’s family sure sees her as a victim. Will mentioned Abby being “mixed up” and “in mourning” but most don’t think of her being vulnerable because she really didn’t play it that way and the story didn’t dictate. I’m still unsure if I see things that way and would love some feedback on how you see Abigail.

Tammy Sue and Ollie reunited with Pa Clyde.
Though Jordan’s more lively than we’ve ever seen her and it’s plain to see she’s fearful of Clyde, I’m still not afraid or creeped out by Clyde. Yet? He’s no Trent or Curtis but oddly, his scenes with Kate are enjoyable. They have – dare I say - a bit of chemistry which I know sounds ridiculous. Plus, they’re in different worlds.

Kami’s manse.
It’s going to be fun watching Kate and Sami as roomies, which is completely original. Already their dialogue and cutting remarks are entertaining, but it’s hard to believe Kate isn’t concerned Sami will spill about her fling with Rafe to Jordan before it’s time.

Jenn, “It’s not going to be easy fighting the wrath of Sami.”

Sami, "My husband cheated on me with the sweetheart of Sigma Chi."

Sami, “You and Rafe had a booty call?” 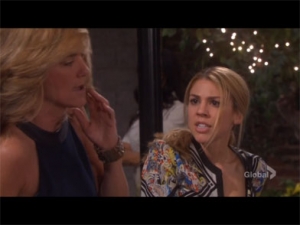 This week was a short one. Salemites saw some tragedy, some mighty big lies, humiliation and more scheming. Let’s get to it!

Hope and Aiden.
The auction never did go anywhere on Monday’s show. It was disappointing in a way, but they raised a lot of money for I don’t know… the school? That really wasn’t the focus. The focus was on Hope and Aiden’s feelings for each other surfacing. It’s intriguing. Hope’s torn about the realization that while she’s missing Bo, she has a thing for another man. Aiden’s trying to be a gentleman by staying away from her – or is there something else going on with him? There’s more to the story about his wife’s death. I’m hooked!

No redemption for Theresa?
John’s poor noggin. He’s already been banging his head on a brick wall trying to reason with Brady over his love life but having Theresa strike him over the head with a fireplace poker just brings him back where he was seven years ago. In a coma. If this doesn’t make Brady get help I don’t know what will. Theresa’s lies already seem to be unravelling and Daniel’s already suspicious. Of what he may not know yet but hopefully he’ll get to the bottom of this. There’s a distinctive feeling that Theresa’s the new Nick. Many say there’s no redemption for her now but we know soaps. No matter what they do to a character, soap operas have ways of redeeming. Look at EJ. Wait. Nevermind. Some don’t feel much for Brady but annoyance because he refuses to listen to his friends and family warning him away from Theresa. It’s understandable but we have to remember he’s an alcoholic and his disease makes all of the decisions. Poor sod. No matter what, he doesn’t deserve what Theresa’s doing to him. It’s Kristen all over again. As for Marlena, this could bring back memories of love for John. How do you feel about a Jarlena reunion?

Our wish: Maybe Victor has security cameras installed inside the Kiriakis mansion. Or maybe the SPD will do their jobs – already we’re seeing this. Otherwise this story’s gonna drag out for months.

Odd bird.
Eve’s really a strange one. She’s so overt in her intentions with Daniel and you can tell he sees it and enjoys the attention. I still haven’t made up my mind about her!

Sami Brady can be scary vicious!
Cross Sami and she’ll ruin you. Ruin. Sami has been pretty entertaining this past week if you like the bitter vibe. She was also wicked to have hurt innocent people such as Ben and HRH Jennifer. Why burn bridges that way? It’s easy to see why she’s ruining EJ and Abigail, but there’s no reason to hurt everyone else who gets in her path. It’s hard to tell if she’s screwing EJ over because he screwed the sweetheart of Sigma Chi or because of that and because he kept those photos of her throwing Nick into the river and other evidence which is admissible in a court of law. That he kept this proves his intentions with her weren’t honourable. For that, surely, he should pay, but now that she has the documents and is rid of him, why waste more energy on him? Like I said last week in Deconstructing “DOOL,” When all is said and done, will Sami be happy? Or will she realize revenge is a recipe for misery?

Many are angry that nobody’s sticking up for Sami, the victim in all this. It’s likely because instead of acting like a victim for real, not faking people like Ben out, she is spouting off all over town, treating people like dirt and seeking revenge ‘for as long as they both shall live’. It’s hard for many viewers and for Salemites to feel for her when she gets this way but just wait until she breaks down. Her family will be there for her and hopefully not say ‘I told ya so’. 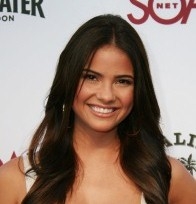 Days of our Lives' Alum Shelley Hennig In Ouija