Days of our Lives’ Alison Sweeney In Radio Hype 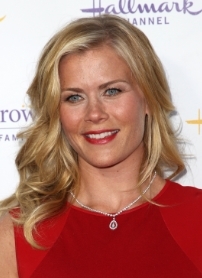 Actress, author and director Alison Sweeney (Sami) will be leaving “Days of our Lives” behind this fall. However, she’s already hard at work on several other projects. Not only has Alison Sweeney joined General Hospital as a director, she has also brokered a deal with the Hallmark Channel. Sweeney is set to be the executive producer and star of “Radio Hype.” In the movie, Sweeney will play a radio host who moves to Chicago with her boyfriend. After that relationship ends, she soon finds herself confiding in another man, only to realize he is a competing radio host.

This marks Sweeney’s second movie for the network. She starred in “Second Chances” last year with her on-screen brother Greg Vaughan (Eric). Soaps.com will keep you updated with more information about this project as it is released.

Find out what happened when Rafe confessed to Molly on General Hospital.

Days of our Lives Spoiler Video: It's Going To Get Worse