Read about DOOL's Jen Lilley in Youthful Daze. Check out the Days of our Lives Daytime Emmys Red Carpet Interviews to find out why Casey Moss said, "I wanted to do something different."

In this week’s Throwback Thursday poll, Soaps.com takes readers back to 2003 when “Days of our Lives'” Lucas Roberts began to have feelings for Sami Brady again…

This week in Salem, Lucas stunned Sami by agreeing to attend her and EJ DiMera’s wedding and by telling her he wished her nothing but happiness. It’s not the first time he’s softened toward her. Back then, Lucas caused Sami and Brandon Walker to break up just moments after they had wed by revealing proof that she had changed Will’s paternity results. In the ensuing confrontation between Sami and Lucas, Sami went through the glass doors at the DiMera mansion and wound up in the hospital in critical condition. As Lucas waited to hear whether Sami would make it, he began to recall the good times between them, and when she was released from the hospital he insisted on taking care of her. The pair became close again, and Lucas was there for Sami when news came that her father, Roman Brady, had been killed.

Ultimately, Lucas ended up proposing to Sami. It wasn’t exactly a romantic proposal, so she turned him down. Lucas then stepped up his game and planned to pop the question properly at the Penthouse Grille. Do you remember what romantic gesture he made to get Sami to say ‘yes’? Vote in our “Days” poll: 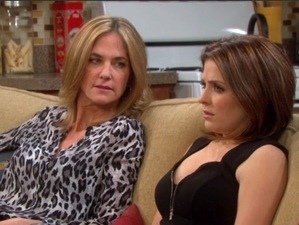