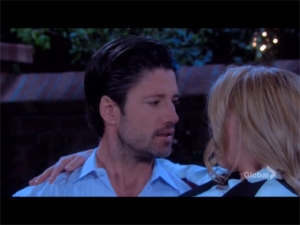 The week sort of dragged. This is what happens when it’s all Jennifer, all the time. Even Sami’s revenge storyline was low key. There’s been too much talking and not enough action. It’s the calm before the storm I guess…

Honkytonk Eve:
What to say about Eve? The show dug up a character from the 1980s that only long-time viewers will remember that nobody else gives a crap about. Just to prop up Miss Prissy Pants. Finally they broke Dannifer up only to keep HRH in the mix by bringing Eve back so we could have the displeasure of seeing Jenn squirm some more. Oy. There are so many more characters who could have returned and had nothing whatsoever to do with Jennifer Horton. As you know, I started watching in 1994 so I missed out on all of the goodness from the 80s. I’ve done a little research on the character, portrayed originally by Charlotte Ross. Kassie DePaiva is a great actress and was quite fun to watch as Blair on “One Life To Live” but it’s still too soon to say how she’s doing as Eve. It’s never easy to fill another actor’s shoes even if it’s been a long 27 years. Some of the fans are complaining Eve was snarkier back then but again, it’s been 27 years. She doesn’t have to be the same. She’s not going to be the same. People change and grow though how much she has grown remains to be seen. All in all, I’m not sure how to feel about Eve so far. Matt says, “I don’t know either. She just seems like she doesn’t belong. I don’t know if that’s good or bad.” Yep. Give us your thoughts: Days Poll: What to say about Eve?

A few questions:
Who is Paige’s father? Some are questioning if it’s Frankie or Jack, Mr. Larson or Mr. Baron (unless Baron’s her stage name) but Eve told Paige she and Jack didn’t consummate their 2 minute marriage.

Is it just me or is it unusual that a girl of 17 uses a word such as ‘harrowing’ to describe Jack’s memoirs?

Can we get rid of the awful flashbacks?

Ben and Jordan.
Jordan agonizing over her secret past was annoying as hell. And Kate needs to get a life and stay out of Jordan and Rafe’s business and please, oh please stop encouraging Jordan to make-up with Rafe.

And yes, I do like Rafe and we all know he has the White Knight Complex but it’s already getting annoying to hear him b**** and whine about how Gabi murdering Nick is somehow his fault or responsibility. Somebody needs to tell him he can’t change the past and he’s not a White Knight. He’s just a dude who did the best he could have done for his sisters.

Kate dug up two men from Jordan’s past. Word has it ***teaser*** one is her daddy. So she didn’t kill him I guess, which many speculated about!

Boozed up, drugged up, and sexed up.
See last week’s Deconstructing DOOL when I blah blah blahed about how Theresa was a bad influence on Brady. There’s really nothing more to say. They need to make this character vulnerable and likeable because after a year of being in Salem, there has been zero growth and zero cares given about her. And Brady… it’s been painful to watch him slip further into Theresa’s clutches and to treat John with such disdain and disrespect when we know John’s only coming from a place of love. Hopefully John will change tactics soon and somehow get through to his son.

Listen to Tad.
People need to start listening to Tad and we need to see more of Tad. He told Gabi not to trust Nick and was right about him. Gabi didn't listen and look how that turned out. This week he told Abigail not to trust EJ. Dude knows what he’s talking about.

Abe.
EJ asked Will to be his best man. EJill lives. Sort of. It's not the same with Nu-Will but it was touching nevertheless. Still, watching this wedding being planned has been painful. Neither Sami nor EJ have a friend in the world or anyone really truly rooting for them except their kids so it’ll be interesting to see how many show up for the wedding (fiasco?). EJ’s so desperate for wedding guests he invited Rafe of all people. Rafe. Hilarious. Rafe’s response was priceless. It was surprising that Abe accepted EJ's invitation and request to marry them. Abe’s such an upstanding man. Of course he’d go to EJ and Sami’s wedding and of course he would marry them. Because of Lexi.

The reluctant wedding planner.
These Sami/EJ/Abigail scenes are so awkward. Some are pretty funny and others are seriously stupid. Part of me wants to tell Sami to either forgive EJ or dump him, and forget this ridiculous revenge plot which is not good for the state of her mental health and the other part of me is really curious to see what she has in store for her intended and his chippie. And really, did EJ think he could pull the wool over on Samantha Brady’s eyes? He really has lost his edge. I mourn the days he donned the black gloves. Now he's just Sami's whipping boy.

You can tell EJ and Abigail both have feelings for each other still. That was obvious when she accidentally fell into his arms. Instead of going along with Sami he should just put his foot down and tell Samanther he doesn't want Abby planning his wedding. This is what guilt does. Makes EJ a wimp. Bleh. I can just imagine what reading Sami has selected for Abigail to read at the wedding!

So what’s going to happen at the Ejami wedding? Will it be a ‘gunfire free wedding’ that EJ’s hopeful for? And what’s Sami’s revenge? EJ and Sami don’t seem to have a prenup so I still think she and Kate could be planning to takeover DiMera Enterprises and more. That or maybe Sami will give the DA DiMera secrets, enough to put EJ and Stefano away.

Jealousy.
It's cute that Marlena's jealous of Roman and Giselle. She has no reason to be. It'd be nice to focus more on this but it feels like there's way too many stories going on at once. Can't wait for the gala!

Oddity.
Abby asked her mother where her ATM card was and Jenn Jenn told her it was in the top drawer of the desk in the Horton living room. And not in her purse? Uh how does that work? Maybe I heard that wrong?

Next week I'm on holidays and Dustin Cushman has graciously agreed to write a column in my place! Please feel free to leave me a comment or two about your thoughts on the week and mine! Happy early Canada Day and Happy Fourth of July!

Kate to Sami, “You are so much smarter than you were years ago.”

Theresa, "That I hate Jenny Prissy-pants and Dr. God?"

Rory, “I thought you’d be out celebrating leaving Salem Hell-hole High. Ditch Miss Glee Club and come party with us.”

"I just love being on the arm of a muscular man like you," Giselle coos.