Days of our Lives’ Eileen Davidson In Spychosis 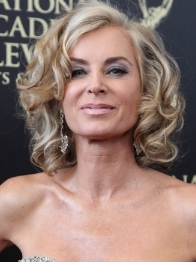 Daytime Emmy winner and “Days of our Lives” star Eileen Davidson (Kristen; Ashley “Y&R”) is keeping busy. Not only is she leaping between Salem and Genoa City, she is also making a movie. The actress and author has been cast as the President of the United States in “Spychosis.” The action comedy stars Jamie Lee Curtis (“New Girl”), Davidson’s husband Vincent Van Patten (ex-Christian, “Y&R”) and John Savage (“Everwood”). It follows an actor who gets caught up in the world of espionage and has to turn to his nurse to help save innocent lives. Currently in pre-production, the movie is scheduled for release in 2015.

Learn what one of her co-stars had to say by checking out Soaps.com’s 41st Daytime Emmy Video Interview: Days’ Eric Martsolf.
And then find out what happens when Levi ruins some renovation plans on General Hospital.

Days of our Lives Poll: Award...