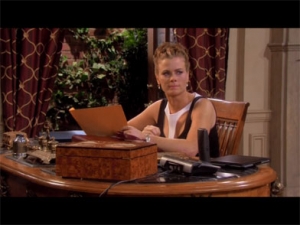 Fans have been complaining that the show hasn’t been overly exciting for a few weeks but it turns out it was the calm before the storm. Suddenly, this week, everything exploded. Three huge reveals knocked our socks off. Let’s discuss!

WilSon.
Love how they’re showing Will and Sonny having a hard time coming to terms with losing Gabi to 10-20 years in prison. It’s so authentic.

Theresa’s a bad influence.
Brady, when high, is pretty funny but when he’s with Theresa it’s as though he stepped into a spot of bad weather. It’s disconcerting that he admitted he trusts her when we know her feelings for him aren’t as strong as the ones she has for his wallet. Without her, it’s easy to see Brady might be able to gather some willpower and refuse the nose candy.

Oh ye self-righteous ones.
Eric went to Bishop White with the evidence to clear his name and it was rather low-key, much to my dismay, the way it was when Eric learned Nicole kept the truth from him. Eric’s lacking passion for anything other than the church. The only time he’s really noticeable is when he calls people out on their crap. He tells it like it is in such a way that we can see he receives no joy from it but whomever it’s directed at hears him loud and clear. Sami was at the other end of his honesty this time when he told her he knew EJ knew what Kristen did to him yet Sami chose EJ over her own twin brother. She must have felt pretty stupid, considering EJ wasn’t nearly as loyal to her.
Does anyone think Eric will go back to the priesthood if he’s able? Maybe a better question is do you even care anymore? Weigh in with your thoughts and vote on the Days Poll: What will Eric do? Maybe Eric and Jenn will get together with Marlena and go off with their self-righteous selves and bore each other to death.

The shrink needs to shrink herself.
Last week I mentioned how Marlena did what she did best and looked down her nose at Kate and Sami and nothing changed this week. That glow in the dark suit Marlena had on this week woke us up better than any cup of coffee could have. It was a good choice. Anyone seeing her coming could have run the other way. Matt says, “Is her outfit supposed to be as obnoxious and misguided as her personality?”

Jennifer Rose needs to give it up.
Tuesday’s show gets top marks for being most boring. Jennifer’s hanging on to something that we all saw was dead months ago when she stopped believing in him when he saved Theresa’s life. Daniel moved on fast after finally cluing in that she never has faith in him. It’ll never change. She’s too sanctimonious. It’s priceless that the kooky ‘snow leopard’, Eve of all people, is interested in him. Talk about history repeating itself.

The shocking two-timer!
Fans everywhere are either throwing up or yelling, “You idiot!” after do gooder Rafe cheated on Jordan. That came out of nowhere but Rafe was probably at the lowest point we’ve ever seen him. Kate, on the other hand, was just randy. Dare I admit nobody’s happier than I am that this came to pass? Maybe slumberous Jordan will find out and take a hike for good. She’s just as passionless as Eric. Before the end of the week, this scene made no sense to me considering we thought Kate was back in Stefano’s good graces, where she wanted to be. I couldn’t figure out why she’d put Rafe’s life or penis in jeopardy. It made sense after we learned she’s in cahoots with Sami and isn’t really into Stefano after all.

The secret affair ain’t so secret!
It’s always fun to be surprised but some viewers had already suspected Samanther knew about EJ’s affair with Abigail. She is Sami after all. Not much gets by her. Everyone’s very curious as to when and how she discovered the truth and what her plans are going forth. Another twist this week was Kate and Sami working together. I had issues finding it believable that Kate and Sami “suddenly” disliked each other. When I started this column at the beginning of the week I wondered if they were working together, perhaps to takeover DiMera Enterprises or something along those lines. With the board meeting coming up it is the only thing that made sense!

Aiden and Hope.
Aiden needs to be seen more than he is. He’s so much fun – so cute. It’s great that he didn’t mind digging up the dirt on Howell in order to secure the Salem Ballroom. I’m looking forward to this gala.

Paige and Eve:
Some viewers are wondering at the possibility that Paige could be Jack’s son, considering Eve and Jack were married and we don’t know who Paige’s father is. It may be more likely that Frankie’s her father.

HRH’s wardrobe mishaps.
It all makes sense. Jenn’s been up in Alice’s attic looking for her old yearbooks. She must have stumbled upon the box marked ‘old ‘60s and ‘70s clothes’.

Feel free to leave me a comment or two about your thoughts on the week, feedback about mine, or anything else “Days” related. See you back here Sunday while we cover the Daytime Emmys.

Brady, "What? No, turn this mother out. It's a good thing; it's an expression. Don't get all toasty."

Brady to John: "What are you doing here? Did you hear the superhero siren go off? Did the John siren go off? Cause you got the wrong address, pal. You don't need to be here. You're a superhero now? You shouldn't wear the tights or the, uh, spandex at this point, but you've got the leather jacket. You've got the low voice. Super Dad!"

Theresa, “Do you really think that I care about your artificially sweet teen romance?”

Nicole, “You can forget about being momma of the priest. You’re just gonna have to settle for being the b**** who unleashed Sami to the world. And Eric can kiss his holy orders goodbye."

Victor to Kate: “I don’t think anyone who twitches their behind for Stefano DiMera has a right to call anyone else low.”