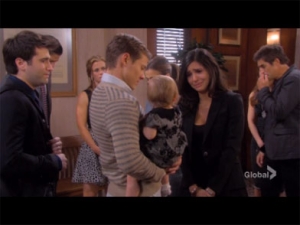 There was a lot of blubbering going on in Salem this week from all of us, Gabi, Kate, Rafe, and Sonny, who said goodbye as Gabi went off to the pokey, and a few more tears were shed from Nicole, Eric, and Jennifer over Nicole’s deceit. Luckily Victor balanced out the gloom and doom with a few fun zingers aimed at Brady, Theresa, and Kate.

Farewell Gabi.
Julie returned from delivering Nick’s body to Melissa and was nastier than ever. By the end of the week many viewers were begging her to get back on that cruise ship with Doug. Though she was annoying, it’s difficult to blame her too much considering she loved Nick and thought he wanted to change. She doesn’t know the full story about him like the rest of us so maybe she deserves a pass. Gabi was brave to see Julie and displayed a lot of sensitivity. Gabi’s scenes with Kate were also pretty touching which reminded us of all that Kate has done to protect her children. It looked as though the Gabster and Tad could have been an item if this whole Nick mess didn’t happen. At least her plea deal, which will have her incarcerated for 20 years in prison for murder one was pretty damned generous. It provides a possible return at some point if the story permits and it’s likely she’ll get paroled sooner. I mean Nick got off in 4 years for the same crime! Already there’s a feeling of loss on the show without Gabi, who has been a large part of the scenery since the actress’ first appearance October 4, 2010. Banus’ last scenes were fantabulously delicious and hopefully we’ll see her in the running for a Daytime Emmy next year.

State?
Are Kate and Stefano back together? It sure looks that way and just in time for Sami and Kate to suddenly be at odds again. My my how things change quickly. Weigh in. Days Poll: Stefano and Kate?

Cole’s return.
To use one of Marlena’s favourite expressions, “Oh my stars,” Bev ‘s schemes just get more and more lame. And Cole really is a loser. He couldn’t even get the joints into Paige’s purse without cocking it up. Bev really thinks that JJ would believe that sweet, perfect, honour roll, 4.0 GPA, virginal, Jennifer reincarnate (without the haughtiness) Paige Larson smokes weed? Does Bev know it is 2014 and there are loads of other things she could do to hurt Paige? Shouldn’t she be helping Paige to keep her GPA up so she runs off to University out of Salem for good? Maybe if Bev got her GPA up beyond a 1.4 she’d think up a better scheme. Still, like her.

Paige’s momma?
Has Paige’s story been rewritten a little to ensure Eve is her mother? Because Eve’s returning to Salem June 18 and Paige said she was staying with her cousin who her mother regards as a bad influence – until her mother arrives in Salem in a few days. Her mother travels a lot and **spoiler** Eve is a singer who returns to get her lymph nodes removed by Daniel, so that could be why she travels so much. Could the cousin be Theresa? Maybe I’m reaching. Or maybe it’s Anne. Either gal is a bad influence.

Bold Ben.
Ben sure didn’t hold back on telling as Dustin calls her, “Justice for Julie” off. My jaw dropped when he called Nick a maniac. Bold move considering he did this while he was at work! This endeared me to him immediately. Go Ben! Or is it Kevin, diner boy from Florida?

“You brought your problems on yourself, Nicole.” – HRH
Ouch. Self-righteous Jennifer sure let Nicole have it this week when she told her that she created this whole mess. It’s true. You all know I love Nicole but ‘I calls them as I sees them’. Nicole, instead of looking to herself to blame, blamed Jenn for outing her and Daniel for who knows what. I agree with Daniel. Eric deserved to know and even though Jenn should have kept her nose out of it, the bottom line is, it’s not as important who told. It had to come out and we all know Nicole would never have done it. Her Royal Hortonness is right. Daniel wouldn’t have given Nic Nic up either. He has a soft spot for Nic Nic.

Many are confused about what Eric meant when he said he has forgiven Nicole for her deceit and disloyalty. I think it’s because he was shooting daggers at her with his eyes when he said he forgave her. I don’t think he has even had time to wrap his head around this let alone forgive her. It’s been probably a few hours since he learned of the deceit. I’m not sure it’s impossible to forgive someone that quickly for what happened. Nicole should give him some space so he can figure out how he feels and move on – whether that means forgiveness and moving on together or apart. You can’t force these things. Nicole ought to know. She is the one who pointed out that Eric accused her of rape and it took her a while to forgive. Jenn and Eric seem awfully chummy and they’re both hurting. We all know that when characters are hurting they can turn to each other for comfort/sex. That’s not a spoiler. It’s just an observation.

Another one who needs to look in the mirror.
Imperious Marlena did what she does best and looked down her nose at Kate and Sami for what they did to Nick until Kate put the shrink in her place by reminding her she’s not perfect either. Even though she is right to be concerned about her daughter's lack of regret over Nick's downfall, those patronizing looks have got to go.

This scene was annoying to me: Nicole to Eric, “You don’t know the whole story.” Marlena walks in and asks, “What story?” What the...Who walks in on a couple and butts in on their obviously private conversation? Didn’t Marlena see the body language of the pair, the bags under Eric’s eyes, and the desperation in Nicole’s voice? For a shrink, she sure misses some important social cues.

Soaps.com interviewed Lisa Rinna about “Sing Your Face Off” and if she’d return to “Days” if asked. What are your thoughts on having a Billie return?

Kate to Marlena, “You wanna see what poor judgement looks like, look in the mirror.”

Sami to Kate, "You're such a nosey Parker."

Kate to Jordan, “You have more phony IDs in that apartment than they do in the average frat house.”

Victor, "Where's my grandson you little tramp?"
Theresa, “Can I offer you some cereal?” Victor, "How about some disinfectant?"

Victor, "You'd better start making some changes now or I'll kick you out on your drunken ass."