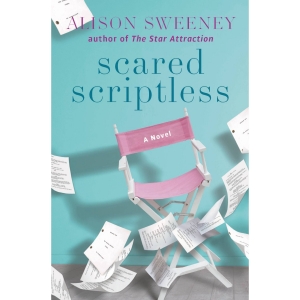 “Days of our Lives”‘ star Alison Sweeney (Sami) has published another novel with Hyperion to follow up on last year’s “The Star Attraction.” Released on Tuesday June 3, “Scared Scriptless” follows the romantic and work frustrations of Maddy Carson, a script editor on a hit TV series.

The actress told TV Guide Magazine that she chose to make her heroine a script editor because, “We’d be nowhere in show business — or in life — without the detail people. It’s people like Maddy who are the true foundation of a show, who know all the backstage scoop and are the most irritated by all those bad actor habits, like not sticking to the script.” Sweeney admitted that this led to her making fun of herself more than a little. She has already started work on her next novel. “For me, writing is therapy. There’s something so relaxing about it. I go out for a run and work out the scenes in my head. I love escaping into a whole other world and love a good romance story about a strong chick, someone you can relate to and maybe learn from. Nothing heavy or deep or torturous. […] Who wants to think?” Read more about it by visiting Scared Scriptless at Hachette Books.

Revisit Sweeney’s earlier foray into the literary world by reading Days of Our Lives’ Alison Sweeney Writes A Novel. And then find out how Cane shows Lily he cares on Y&R.

Days of our Lives Spoiler Video: I Love Good Ideas