The underbelly of Salem.
At this point, Brady and Theresa just make most viewers feel skeevy and dirty and crave a shower. It’s fun to party and I don’t judge those who want to dabble a little from time to time in illegal or legal drugs but it’s become a slippery slope for these two. They’re clearly not using for fun but to hide their deepest and darkest secrets, pain and insecurities. Meh. It’s not easy to watch and they’ve very little to contribute to any other storyline at the moment which is a shame because they’ve both been interesting characters other than the boozing and drug usage. Do I even mention that once again John pushed Brady into Theresa’s arms? Oy. It’s sort of a travesty that a vet like John (Drake Hogestyn) has so little to do. Our vets are what made the show great, so they should be given a little more to work with.

Regarding all of the fighting and carrying on at the square: For a small town that is supposed to be owned by the Horton and Brady clans, they sure do know how to make a spectacle of themselves in the square that’s named after Alice and Tom Horton!

“I’m leaving you.”
Finally Nicole’s secret is out. Eric knows she kept information to herself that would have cleared his good name with the church and everyone else. Eric took Nicole’s lies well. Another man might have screamed bloody murder at her but he was pretty restrained. How anticlimactic. Who wanted to see more screaming like when Brady dumped Kristen on their wedding day? At least Nicole bounces back pretty fast. Once she has a few good stiff dirty martinis in her, she’ll be fine.

Midol Complete.
It was good to see a product placement again. I think the last one was for Cheerios. This Midol one was amazing. Who brings a full box of the stuff with them everywhere they go? And the stiff dialogue? Hilarious.

Sonny, “Will Horton, you've got to be the most romantic idiot that I've ever met.”

Brady to John: “Is that Kristen letting you know when she’ll be available?”

Abigail to Paige: “There’s a lot going on right now and to top it off I’m cramping and bloated. Usually I take Midol Complete but I’m all out.” 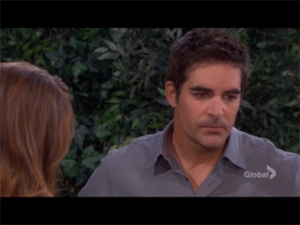 Most of this short week was pretty sad due to the aftermath of Gabi’s murder confession but the Midol Complete product placement ad made up for it. Let’s discuss.

The murder wrap-up.
Last week in my column, I noted that neither Will nor Victor trusted that Sonny didn’t murder Nick. This week, luckily that was addressed at least by Will and Sonny, who promised that would never happen again. Sonny told his “romantic idiot” of a husband that they need to tell each other everything from now on. Until next time… just kidding.

I felt for Gabi when she confessed to murdering Nick. That sounds crazy. She murdered him in cold blood. It was wrong but I loved the complexity of Nick Fallon and will miss Blake Berris. Gabi’s scenes were a mix of great writing and dialogue, and fantastic believable acting on Camila Banus’ part. We all know that people will do just about anything for their children, and this was overall a great story to tell, one that will be revisited someday when Arianna has questions about her mother or when Gabi gets out of prison. That Gabi came clean with her part in Melanie’s kidnapping spoke volumes and hopefully Kate and Sami realize just how she saved their asses. This might be the perfect time for Chad to return if that was in the cards.

Poor Hope did a good job not losing her mind over Gabi’s confession. Possibly being that she’s a mother she could somewhat understand why Gabi took things that far. I don’t know but I did like how she contemplated where Bo was during it all and how Aiden was there to let her cry on his shoulder.

Sami being Sami blamed Jordan for Rafe being incommunicado while Gabi confessed. Is Rafe supposed to follow Gabi around in case he misses a major moment of her life? If that’s the case why didn’t Sami yell at Jordan for going on a date with Rafe while Gabi was busy shooting Fallon? Would it have made a difference if Rafe got to Gabi ten minutes earlier? Sami can be so ignorant. They should show more scenes between her and Jordan. It could make Jordan more likeable.

Jordan thought Ben might have killed Nick after remembering what happened ‘before’. Did Ben kill their father or step-father or someone else? Is that why she’s so worried? Is that why Paige recognizes him from Miami? Was he in the news? We noticed recently that during Gabi’s photo shoot when he refused to stand in for the male model, but he went to the next level this week and ripped up the photo Abby took of him with her cell phone. That’s pretty extreme. Their story needs to be told – yesterday.

Poor Rafe. He lost one sister to death and now he’s losing his last tie to Salem when Gabi goes off to prison. It’s a shame their mother has never been seen. It was already heart wrenching watching him tell her the news over the phone but could you imagine this scene in person?

Did you feel for Gabi or are you glad to be rid of her? What sentence should Gabi get? Vote!

Days of our Lives Spoiler Video: I Love Good Ideas