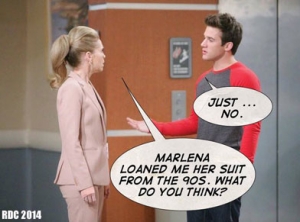 The smell of desperation is still in the air in Salem, and Nick’s murder case was wrapped up with lightening speed. On with the column…

Consequences.
Nicole’s lucky to have a good friend like Daniel, who didn’t give up on her even when she admitted she told Eric he was in love with her. Let’s hope he hangs in there because she’s going to need him when this is over. When Nicole’s desperate she doesn’t think and it didn’t occur to her that even if she married Eric, the truth would still come out and they’d still be in this predicament they’re about to be in. Thanks to Jenn. Honestly, just when we thought they couldn’t write Her Royal Hortonness any worse. It looks as though she and Daniel will be having more problems ahead because she took it upon herself to tattle on Nicole. Oy. Bad move. Not to mention her bad hair and bad style. See photo inset.

Whodunit is over…
Lucas was let off the hook this week in the Fallon murder case, and then Will confessed he also didn’t kill Nick. We knew he didn’t do it. He thought he was going to take the blame for Sonny, but Sonny didn’t off Nick either. It was supposed to be super romantic that he would be Sonny’s hero and come to his rescue and it was romantic but also a little bothersome that Will didn’t trust Sonny at his word that he didn’t kill Nick. Victor also mistrusted Sonny and assuming he killed Nick, offered to send his great-nephew on a one-way trip with his husband and daughter to Indonesia, which just happens to have a non-extradition treaty. Love the scenes between Sonny and Uncle Victor!

Last week in my column I had the feeling that Nick Fallon’s murderer is someone we least expect. That was wishful thinking, wasn’t it? I should have stuck with my original thought that Gabi did it. I was hoping for a few plot twists because all signs pointed to Gabi which I thought must be too obvious. It was obvious but nevertheless, she confessed and the resolution wrapped up way too fast which didn’t make for much of a payoff. I’m left feeling a bit unsatisfied at how anticlimactic it was and more than a little curious as to why she did it when we saw only one scene that told us she possibly didn’t feel for Nick the way he felt about her.

Hmm when did Abe become commissioner again? It’s good to see him back in the fold.

Teen scene.
Bev’s devious yet ridiculous plot to get Paige to become disgusted that JJ might have given Bev an STD backfired. It was fun to see the younger crowd scheming but Bev must have been taking lessons from Anne or Theresa. She should talk to the master – our Sami. Paige was pretty quick on her feet and saw right through Bev. She should thank Bev, because it looked as though things for her and JJ just intensified as a result of the silly scheme. It was endearing to see Paige’s vulnerable side come out while she confessed to JJ the reason she’s cautious with dating.

The drunk and the stoned.
Theresa and Brady are back to being bad and getting naughty together thanks to John’s moronic attempt to get his son to stop drinking. John needs to dial it down a lot, and get out of his son’s face. Has he learned nothing from being married to a shrink for years? If you push someone they’ll only push back and Brady proved it by running back to Theresa after his run-in with John. Now he’s back on coke. Bleargh.

Doc ‘n Roman?
Marlena couldn’t help herself from making joke after joke after joke when Aiden informed her Roman was taking one for the team by accompanying Giselle to the Gala. Is Marlena jealous? Should Roman and Marlena get back together? Vote!

Nu-Ben:
I like him. He’s not creepy or stalkerish but that deer in the headlights look Abigail gives him all the time needs to go. Is she supposed to be showing us that she finds Ben a mystery? It’d be preferable to see her flash him a few flirty smiles because at this rate it’s hard to tell what she feels. Nu-Ben’s a nice addition to the cast but he and Abby just don’t feel right. Yet?

Like father and son.
JJ and Daniel’s relationship has become very solid. Even though JJ was so obviously used just to further the story with Nicole and Eric, it’s still good to see JJ using Dan as a father figure.

Ali’s last week on Days of our Lives.
It was January 22, 1993 that Alison Sweeney made her debut on “Days of our Lives” as bad girl, Samantha Gene Brady. After 21 years, May 23, Sweeney finished her last day on the show with a big bash on-set which included visits from Christie Clark (ex-Carrie Brady), Wayne Northrop (ex-Roman Brady/Alex North) and Patrick Muldoon (Ex-Austin Reed). Could Carrie and Austin be part of her last airdate? It’s difficult to believe Sweeney’s no longer taping after all these years but luckily, viewers have months until her character’s storyline is wrapped up. Save the tears until then!

For those who haven’t yet heard about EJ's Rumored Exit, it’s intriguing. It could be spoilerish which is why I won’t discuss it further here, but if it happens, we will talk!

Brady to Nicole, “Who are you? Polly Puritan?”

Victor to Sonny, “The next time you want a man murdered you come to me."

Will, "I came to confess. I killed Nick Fallon."
Rafe to Jordan, “Since you won’t tell me anything about your past, I’ve had to make it all up.”

Daniel to Nicole, "Why didn't you tell him that I killed somebody or that I was cooking meth in my spare time?"