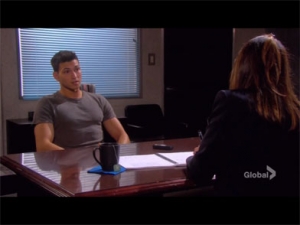 It was an enjoyable week and Salem smelled of desperation and investigation… and clam chowdah. It centered around Salem’s murder mystery and Nicole’s behaviour which is spiralling out of control…Thoughts?

Murder suspects:
Last week we discussed the motives the suspects in Nick’s shooting had at length. This week we can exclude Sami and EJ’s hitman so we’re down to Kate, Will, Sonny, Percy, Abigail, Rafe, nu-Ben, Stefano and Nick – because as we’ve agreed, it’s altogether possible that Nick has a doppelgänger. With some hounding from Hope, and proof that the SPD isn’t always useless, we learned Lucas’ shoeprints were left behind at the scene of the crime. Lucas revealed he was at the park just after Nick was shot and found him lying still on the ground. He said he took Kate’s gun and threw it in the river… That Salem River has seen a lot of action. It’s where once up on a time Paul Hollingsworth’s body was thrown, where Chloe Lane felt life was worthless and attempted suicide, where Sami threw her gun after shooting EJ in the noggin, where Sami and Kate threw Nick’s body after Gabi hit him in the head with a rock, and where Kate’s gun wound up after Lucas ditched it. At this point it really doesn’t look as though Lucas killed Nick so who did it? I have a feeling it is someone we least expect…

Detective Brady.
Some find Hope’s been rather obnoxious while questioning those on the murder suspect list. If she was as sweet as pie, we might complain that she’s not doing her job or playing favourites. Alas, she can’t win but she is doing a good job and trying hard to keep her emotions out of it. I’ve got to give her credit. Plus, she’s interviewing suspects in the murder case of her cousin. The strain must be almost unbearable. It was a welcome relief having Aiden take her out of her head and gave her a break. I’m really enjoying the slow build between these two characters. A teaser…can’t wait for the Summer Gala!

Doc and John.
It was a shocking moment watching Marlena tell John she didn’t think he had a reason to stick around in Salem anymore now that he screwed up his relationship with her and with Brady. It was pretty hurtful but she had a point. It didn’t seem to faze John who thought he and Brady could work together to find Kristen and finally deal with her. I think John’s on to something. Brady hasn’t been able to move on since Kristen messed with him but he might be able to if he made Kristen pay. What are your thoughts? Does John have a place in Salem? Vote!

Oh Nicole...
It’s all very soapy. Poor Daniel gets shafted once again but this time his friendship with Nicole is at stake. Eric’s pretty forgiving but even I’m not sure he could forgive Nicole for keeping the truth about being able to clear his name for weeks and for pretending her bestie is into her. Ouch.

Ejami Family:
Johnny was so sweet to tell his parents not to worry, that he and Sydney would keep an eye on Allie. We’re finally getting more real family moments. The kids will be missed when they are gone.

Kate, “Lucas, I raised you to be a better liar than that.”

Theresa, “You're not driving are you?” Brady, “No. I brought my skateboard.”

Sami to EJ, “Your hitman gave you a refund?”