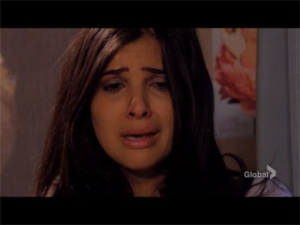 It was a melancholy week as Nick died and folks reminisced about who he was before his prescription drug addiction and after his stint in prison. While some were pained to see Nick, and some guilt surfaced, others seemed to almost jump for joy. That storyline has been intriguing and it’s been a good week albeit almost low-key May Sweeps.

Who shot Nick?
Nick was shot three times. Once in the back, then twice in the chest which is making some viewers believe he was shot by two or even three people. Whoever did it wanted the job done but why didn’t they just shoot him in the grey matter? If the hitman indeed did the deed he wouldn’t have done him execution style because it’d be too obvious. Hope, AKA The Pride of the Salem PD, seems to be reaching in thinking the shooting was a hit since it doesn’t look like one so far. We’ll know more after the autopsy.

Nick’s last moments were brilliantly acted. It was easy to see Susan Seaforth Hayes came from a theatrical background while she played Julie so over-the-top and accusatory of everyone in the square.

Poor Allie. Sure, as they say, ‘kids are resilient’ but seeing her cousin dying is going to haunt her, maybe even shape her character though it’s unclear at this point whether or not she’ll be staying in Salem when EJ and Sami leave.

Last week our whodunit list included Sami and EJ’s hitman, Lucas, Kate, Will, Sonny, Percy, Abigail, Nick – because it’s altogether possible that Nick has a doppelgänger – and Stefano acting on Kate’s behalf without her knowledge. Many want to blame and are speculating that Gabi ended Nick. She’s an easy target. Her motive? She wanted out from underneath Nick’s thumb and wanted things to go back to normal. She’s rushing to get back to work, namely to Argentina for that modelling gig, but that could mean she’s either on the run or taking her mind off her grief. It didn’t go unnoticed, the speed of which she got EJ to draw up a new custody agreement, giving her and Will shared custody of Arianna.

Rafe keeps telling anyone who will listen that if he was the detective in charge, he’d put himself at the top of the suspect list. His motive? Getting Nick away from his sister. So why is it again that he’s not working the case? Is it because he believes Gabi, Will, or Sonny shot Nick or because he is the one who did it? Leaving Hope in charge was almost cruel considering Nick is or was her cousin and she’s closer to the case as Rafe is. Maybe it’ll give her good motivation to solve the case. I’ll save the SPD jokes this time.

I forgot to add gun toting Ben to the suspect list last week. This character is confusing. If he’s not stalking Abigail, he’s still strange, has a dark temper and a secret. That being said, it was respectful of him to back off from kissing Abigail because he didn't want to take advantage of her vulnerable state.

Sami’s so good at giving herself away. EJ had better sedate her before Hope has to take her statement!

EJ himself has done worse than Nick yet thinks Nick had it coming. "Nick is the only one to blame for the fact that he had to be murdered." Maybe or maybe Nick merely turned the tables on his haters (with the exception of Will and Sonny) and didn’t deserve to be murdered. Beat up maybe... but murder? Weigh in. Did Nick deserve to be murdered? I digress. I do love how EJ always picks at his fingernails and arranges his cufflinks – his tell that he’s hiding something.

Some are theorizing that Melanie killed Nick considering her name has come up several times over the past few months. Anything is possible but what motivation would she have after all this time? Unless she did it in order to get Gabi to take the blame. Either way it’s fun to hypothesize.

It was pretty funny when Rafe and Will agreed that Nick was pretending to ask for counselling after Marlena told them about the voicemail Nick left her. Was nice to see a touch of humour in such a devastating situation – unless you are one of the viewers who are cheering Nick’s murderer and then perhaps are already grinning ear-to-ear seeing him on that slab.

Still harping on the ship that sailed months ago.
Jenn, AKA Gypsy Queen, and Eric’s scenes at Alice’s were so bloody boring, forced, and useless, and only written in order to allow Daniel and Nicole more time to discuss her lies. Was this really necessary? It’d have been great to see any of the other stories furthered. The Ericole ship sailed the day she decided to keep that evidence from priest Eric. Sometimes characters can go too far and this time is one of those times. It’s impossible for most to root for Eric and Nicole, knowing that Nic will never change. Eric is too good for Nicole. Though we love Nicole, she needs somebody not as pure as the driven snow like Dudley Do-Right, uh, whoever that is.

Anne to Theresa, "Our lady of lateness has graced her with her presence.”

Kate, "I just spent the last half hour being grilled by the pride of the Salem PD."

Find out how to get your tickets to the Days Studio City fan event in June.