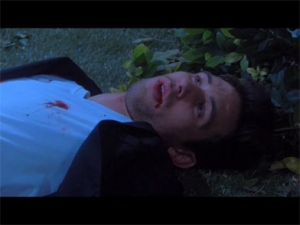 What an explosive ending to the week. Let’s get right to it.

Last Friday we learned James Scott’s last tape date was May 2. Once again, everyone was told months in advance the way Sweeney’s was. It’s a shame this knowledge wasn’t kept a secret. It’d be better storywise and for the longevity of our soaps if the fans didn’t know every move an actor or a character made months in advance. These two departing will leave a pretty big hole in the show especially since the writers wrote almost solely for them these past 7 years. This is why it’s best to utilize the entire cast.

I have to tell my mommy…
Abby hasn’t learned that some things should be kept quiet and having sex with EJ is one of them. Even if Jennifer finds out on her own it doesn’t matter. It’s none of Jennifer’s business. Still, I suppose she’d rather be the one to explain herself than have Nick… oh Nick won’t do it because he’s dead. Case closed?

Jordan’s mystery.
Kate finally blurted out to Jordan or Joan or whoever she really is that she knew she wasn’t who she seemed. Jordan not only stood up to Kate but attacked her. I guess it was a long time coming. I’ve mixed feelings about this. One, I couldn’t care less who Jordan is because I couldn’t care less about the boring character. Two, it is nice Kate’s looking out for her friend but she needs to get a life. Three, lawsy, lawsy, lawsy, this story is a complete bore. Jordan once again tried to leave Salem. She’s becoming too much like Lucas who disowns his mother every 3 years but never follows through. Follow through Jordan!

Look at my ring! Look! No look – really look at it.
For someone who has been married four or five times, it was surprising Nicole still got that enthusiastic, er annoying when gifted with bling. She quickly explained it’s what it represented which was Eric’s faith in her. The very faith she broke long ago. Now that Dr. Dan knows about this will he keep it from HRH Jennifer or force Nicole to tell Eric? Something tells me Dan and Jenn are in for another storm if Jenn finds out Nicole really hasn’t turned into a Jenny clone.

Bev/JJ/Paige:
The triangle. JJ and Paige didn’t get on my nerves during their discussion about why he has abandonment issues. They shared a tender and sweet moment but I’m not sure I’m ready to get behind them just yet. I’m not sure Bev is, either.

Whatever…
Sami didn’t know until Allie told her that Nick emails her? Doesn’t she oversee her kid’s email and online time? Then she has the gall to get pissed off at Lucas for letting Jordan take Allie for frozen yoghurt. Oy.

Red alert!
Ben’s an idiot, a stalking creeper, and why Abigail’s giving him any of her attention is beyond me. “You don’t look like you could hurt anyone.” Um because she’s beautiful? Get rid of this guy! Days Poll: Ben a stalker or not?!

Bye bye Nick.
It was really exciting to see such a talented actor as Blake Berris return to the show. We were lucky to have had him as long as we have but it’s a travesty that they had to kill Nick off. He was so much fun to love to hate and to love. There were so many dimensions to Nick Fallon unlike a few other characters we won’t bother to name. His exit from Salem was bloody fantastic from his tender scenes with Maggie and Julie (It’d have been so much fun to have a flashback of Julie’s past.) to his scuffles with Sami, Abigail, Will, and Sonny. I digress. It may be an unpopular opinion but Nick has been one of the most compelling characters “Days” has ever written and he’s one great actor. It’s never been black or white with Nick. There are too many layers to feel consistently hate or love for him. In recent months, I can quite easily justify the way he treated Sami and Kate. Some will argue Nick is the one who got what he deserved and I’d completely understand that opinion too since he stalked and tried to rape Gabi.

Something fishy. Percy seemed awfully confused with Nick when he said he didn’t forgive and forget Sami, Kate, Will, and Sonny. Why did Percy think Nick forgave them? Was Nick finally showing his true colours or is there more going on than we know? Did Nick’s scar appear and then suddenly disappear in certain episodes or am I dreaming? Why was Nick mean to Samanther yet later call Marlena for help because he didn’t like being the way he was? Are there two Nicks or is Nick schizophrenic or something?

This is a laugh. Nick thanked Julie for not judging him. "God would strike me dead. I have no right to judge anybody," she said. Really? Like she hasn’t been judgemental in the past?!

Who shot Nick?
The most obvious is Sami and EJ who hired the hitman. They’ve also both killed before with no problems.

Last week Gabi seemed to be under duress going along with Nick’s plan to limit Will’s involvement with her daughter. This week she told Arianna that maybe she could learn to care about and love Nick in time, that she was doing ‘this’ because she had to. Was ‘this’ killing Nick?

Lucas went to see Nick to discuss the custody agreement just before the shooting. He took the rap for Will shooting EJ once upon a time. Did he have time to get a gun and shoot Nick?

How about Kate, the formidable grandmother who was tired of Nick taking advantage of her and her grandson? Dustin Cushman says, “It will likely be something like Stefano (or a henchman) does it to protect Kate.”

Golden Boy himself? William shot EJ in the back once. Nick was shot in the back. Could our mild-mannered Will, who was brought up by two devious souls and a formidable grandmother, be capable of murdering his own cousin in cold blood in order to ensure his daughter wasn’t brought up by him?

Did Sonny really put the gun – and silencer - into the closet or did he have it with him?

Could Percy have returned from Devon England, angry because his free ride came to an end?

Maybe it was Abigail, in a fit of passion, not wanting anyone to know she committed a betrayal of epic proportions. Or Ben did it for her?

Possibly Nick isn’t really dead and the man dead is a Nick lookalike, shot in order to cast suspicion on his enemies! Hey it could happen. It’s a soap!

Nick, "If Grandma Horton saw them [photos of EJ and Abby] she'd be rolling in her grave."

Kate, "Then why do you have more aliases than P. Diddy?"