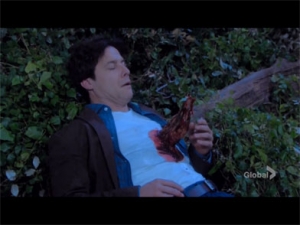 Salem Shenanigans from April 28 – May 2:

Liam and the stalker storyline were terminated with a surprising twist when Nicole shot Daniel instead of Liam and Liam’s death came, oddly from falling on a rather large wood shard. It looks like Theresa’s off the hook but Nicole’s nightmare’s just begun…

Goodbye Liam.
Jennifer was so brave to Liam, asking him to spare her friend Nicole while Liam was raging at them and brandishing his faulty gun all over the place. Mouths dropped. This is the good Jenn that I used to love – strong, kind-hearted, and without a hint of whining. Even Nicole almost fell over in shock. Even as her tormentor lay dying on the ground, Her Royal Hortonness gave him compassion. It was a pretty incredible and a pretty sad moment. I pitied Liam at that moment. That being said many are happy to see the last of that story!

Jordan’s mystery.
Because of the solemn look that came across Ben’s face when Abby commented that his parents raised a chivalrous person, we can assume at least one of Jordan and Ben’s parents are an issue to them. Kate finally admitted she knows Jordan has more than one identity. Hopefully this means this story’s going to advance some. This secret’s not endearing viewers to either Ben or Jordan. Speaking of Ben, what gives? Our resident stalker Nick seems to sense a kinship in Ben and warned Abby about him. It’s probably good advice because Ben does seem stalkerish. And what’s the look Abby gets on her face whenever she’s around him? Is that curiosity or her way of showing interest? Either way, they’re about as exciting as watching grass grow.

Young, complicated love.
Paige caught JJ on a date with Bev and didn’t even bat an eyelash. She didn’t seem hurt – she adopted that doe in the headlights look. Bev gave her an earful about horning in on her man and still no emotion from Miss “Stanford.”

One of our posters, ‘veryopinionated’ says, “Bev promised to break up JJ and Paige. That Stanford offer is probably from Bev.” It’s a possibility. When she received the text I kept thinking it was bizarre and when nothing else was said I figured it was just really progressive of the University but I like veryopinionated’s take better!

What do you think? Should JJ give Bev another shot or stick with Paige? Vote! Days poll: Who should JJ be with?

If Gabi was any slower she’d need to be watered once a week.
It doesn’t make sense for Aiden to waste his precious time drawing up a custody agreement based on nothing. Wouldn’t a lawyer first discuss exactly what Gabi wanted before taking things that far and writing up an unofficial custody agreement? This was hard to believe and only done to get Will’s panties in a twist. That Gabi didn’t see the red flag waving over Nick’s controlling head during that custody discussion to me made her look even more dense than usual. She said something to the effect that she had to believe Nick had changed or she’d feel as if she was losing her mind. Eh? Whatever, man. Will’s just as bad. For someone who grew up with a mother doing all she could to screw his father out of custody, you’d think he’d have had something drawn up the day he learned Arianna was his. This is a big and horribly heart wrenching learning experience for William.

Diggin’ the newbie.
Soap opera newbies get a bad rap but Aiden (Daniel Cosgrove) has already shown us so many sides to Aiden Jennings that he already fits right in. Aiden’s a fun character, he’s got brains, and humour, he can be a jerk, and he’s not a quitter. He’s likable. That being said, he’s awfully naughty. He really shouldn’t have allowed Ciara to pimp herself out by begging Roman to ask Giselle out to the Gala. That was inappropriate. He called her unusual but she’s actually kind of scary. And intriguing. She’s got a devious mind. It’s fun but I really hope she doesn’t turn out to be too much of a bad seed.

New love?
The timing is perfect and Abe and Maxine are two people deserving of love and happiness. Their scene in the park was romantic and endearing. One of the highlights. Very touching especially that Theo is adapting so well.

Percy.
Percy took the pictures of EJ and Abigail on the island at Nick’s behest and lucky for him EJ was in a good mood and decided to let him live – in Devon, England! That was the highlight of the week, watching EJ don black gloves and wind that cord around his hands to intimidate Mr. Greetings. This is the beginning of the end for Nick...

Mailbag:
We receive quite a bit of fan mail from people just wanting to sound-off about the soaps. Here are two in particular of interest this week:

Nancy says, “Why don't you get Marge back to kill Sami on her wedding day? As Sami is suited up to marry EJ, all we hear is a gunshot and Sami screaming. That’d be the ending of Sami Brady.”

Marlene L says, “Enough! I've watched ‘Days’ for over 40 years, and cringe at the inaccurate medical scenes, especially CPR. But the current storyline about the drug Dilaudid is so full of inaccuracies, it's like Swiss cheese. It's a Schedule II controlled drug, so no samples, no refills and it's available in 1 and 2 mg doses. An 800mg dosage, as shown, does not exist, and if it did, it would kill a whale or an elephant! I'm a pharmacist and would be happy to review scripts to assure medical accuracy. Thanks for letting me sound off!”

Afterthought:
As many suspected, James Scott is leaving "Days of our Lives." May 2 was his last tape date and he'll be seen on the show up until October. The actor told SOD "I would like to extend a heartfelt thank you to NBC, Sony and Corday, particularly Ken Corday, for the amazing 8 year run on 'Days of our Lives' and for graciously supporting me in my decision in leaving the show to take personal time. To the unbelievably loving fans, I can’t begin to express my gratitude for your love and support over the years. I will miss you immensely."

Liam to Nicole, “You might as well end this with a clear conscience.”

Nicole, “This guy's like a zombie. He just keeps coming back.”