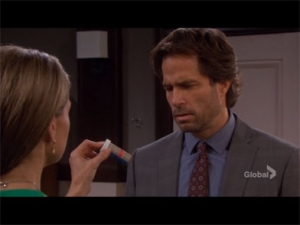 The theme this week was warnings and threats. The two storylines ramped up a bit but it wasn’t overly exciting. Let’s get down to it.

The non-reveal.
Viewers have had mixed emotions when it comes to Monday’s unusual Ejami fantasy episode. EJ and Sami are seen practically in every episode of “Days” when there are so many more characters the show could, yet doesn’t write for, so there’s no need to pimp them out by dedicating an entire episode to them. It didn’t get us any closer to wrapping up any of the storylines so many wonder what the point was. Or what the real reveal will be like when it happens. How can they top this? Some viewers read the teasers and assumed this was going to be the real deal. They were disappointed and have valid concerns that when the truth does come out, they will have to sit through the whole thing again or the real reveal will be lame. It would have made a huge impact if it was real. It went off the way we all expected with a lot of yelling and sobbing but the twist having Abigail pregnant and shoved down the stairs, similar to Nicole’s fall down the stairs in the square in 2012 was surprising and classically soapy.

Kami.
Love me some Kami. Sami’s right about Nick and Gabi. Nick’s got her, Gabi, and Kate right where he wants them. If dumping of a body ever came up, Gabi very well could say that Kate and Sami coerced her in her fragile state. Really, that’s what happened! Things just got real for Kate and Sami.

State.
Stefano sent Kate a gorgeous ring, hoping she’d wear it to their next dinner. He’s a fighter. Kate should know better than to keep the gift let alone wear it. She’s now sending the signal for Stefano to proceed. Surely she knows this! I hate to admit that even though Stefano arranged to have Rafe’s penis cut off I still love me some State.

The criminally insane.
Liam hiring people to do his bidding is pretty ballsy and shows us he’s capable of a lot more than we thought. He’s finally intriguing to me! The lighting was fantastic while he was eavesdropping on Jenn and Dan’s discussion regarding the prescription for Dilaudid. He looked like a comic book villain grinning and sneering. It was both nasty and amazing. When Nicole tried to seduce him in the bank, Matt (of ex-SOF Matt's Musings) says, "Nicole is not smooth at all." Maybe she's been out of touch by dating a priest. She should have thought of seducing Liam a lot earlier!

JJ and Paige.
JJ has known Paige all of three weeks and already he’s losing his mind because she’s going off to university in September? Dude. They’re only friends who shared one kiss – a peck. They’re not even in love so big deal. Another rushed romance from two more people who don’t even suit each other. Gah.

Tiresome twosome.
In a nice twist, Jennifer believed in Daniel after finding the pills in his apartment. She knew he was set-up and it was glorious to see.

Two minute hearing.
Did anyone find Brady’s part in Daniel’s two-minute disciplinary hearing as unbelievable as Anne and I did? That Dr. Dan’s best friend would be at the hearing let alone mediating was laughable. Speaking of Anne, even she's starting to get to me. As if nobody has heard her bitching about Dr. Dan and slinging mud at his reputation! By now not even the saucy Maxine has gone to Mr. Burns with a complaint? Ridiculous.

Rafe, "You sounded like Freddy Kreuger was after you."