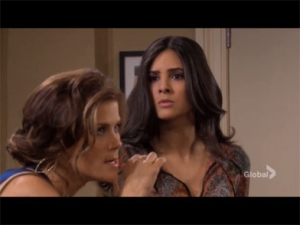 Another week of blackmail, loads of hypocrisy thrown into the mix, and while we can see things are starting to gear up for May Sweeps there are still issues…

“Wah wah wah.”
When EJ talks – when anybody talks, does Sami, AKA “The Mouth,” just hear what Charlie Brown hears when his teacher or mother talks? EJ has proven he really does love kids. He must, to be marrying one. EJ told Sami numerous times to leave Gabi alone because they need to treat the Nick situation delicately. If anybody knows how to out scheme a schemer it’s a DiMera. Sami, on the other hand, is the biggest screw up in the history of Salem and yet the hypocrite blew up at Gabi for being stupid and not because she’s concerned for Gabi’s welfare. Calling Gabi an unfit mother was a little over-the-top and coming from Sami was a laugh. Blubbering like a five-year-old when her adult son Will asked her to abide by some boundaries like any normal human should sent many viewers over the edge.

Gabi’s life; Gabi’s decisions.
As stupid as we think Gabi’s decisions are, they’re hers. She’s an adult and can do whatever she wants. Even though I’m on WilSon’s side with this, they really all are on her case too much. EJ’s right – the more you push someone the more they can pull away. Thankfully Will brought up getting a custodial agreement drawn up but you know this just means Nick will put a stop it. Many have been wondering when the show would bring up her letting Andrew kidnap Melanie and EJ did that this week. Is this because Gabi might at some point finally see the light and Nick may have to resort to blackmailing her in order to get what he wants? It wouldn’t be a surprise but it’d come at a personal cost to him. I think. Sometimes I’m not even sure he really loves her or if this is all a rouse. He’s pretty smart and it’s wrong to underestimate him. It’d be interesting if Will brought it up in order to get custody if Nick pushes him too far. Some viewers wouldn’t mind seeing Gabi in jail since she didn’t have to pay for her crime other than with guilt. Funny she hasn’t even once overheard Nick being a jerk when everyone else in Salem overhears just about every secret there is. Gah.

Will’s a bit of an enigma.
It was good to see Will stand up for his family to his mother and Rafe this week. I like this side of him. His upbringing has never matched the kind of man he turned out to be though and it’s really not that believable that he has virtually no flaws. Every character needs flaws. I still miss EJill! Nu-Will doesn’t have the same chemistry as the last portrayer did with EJ.

Dannifer.
Here’s the thing: Jennifer was good with Jack because she was the martyr and he was the antihero. Both Dan and Jenn are martyrs. You can’t have two martyrs or this is what you get – a boring couple. It’d have worked if Jenn dated Liam and found out he was psycho when they dated and her friend Daniel helped her out of the relationship. As. A. Friend. People might have started to like Jenn again and hate Liam. As it stands most just want Liam gone because it’s a waste of story. The others are rooting for him to take Jenn Jenn out.

Blackmail.
Nicole’s decision to let Liam blackmail her is making her look needier which makes it harder to want her anywhere near Eric. I loathe the storylines where the women do all they can to “keep” a man! It’d have been perfect if Nicole took her chances for once and told Liam to shove his blackmail up his arse and then called Daniel right away to tell him Liam’s the one who drugged him.

Brady off the sauce?
So random. So just like that we’re to believe that an alcoholic can go off the sauce in order to help a friend. He’s quite adamant about it, even dumping Theresa. The bromance scene with Daniel was really sweet but the whole thing came out of the blue and left me going, “What?”

Is anyone else done to death with Dan and Jenn needing rescuing?

From sizzle to fizzle.
To be blunt, I like JJ with Bev. She’s more his speed. JJ and Paige are like Daniel and Jennifer. I’m already bored to death.

Summer Gala:
Aiden and Hope’s scenes though contrived are still fun. They bonded over their experience with the lame and rude domino player, Mr. Howell, and their scenes with Giselle were cute. Roman finally has the chance for a date but has no interest in Giselle, who he calls a nightmare. That’s too bad because she’s pretty and single and he never gets any loving.

Weigh in on Aiden & Hope planning the Gala.

Last thoughts...
Many fans are asking, “Where’s John?” He was brought back and seen in a handful of episodes that didn’t further his storyline and he’s been MIA ever since. What gives?

Anne, "How blessed we are that he sprang from your loins."

Theresa, "You know what? You and your friends all think that Daniel and Jennifer are just the cutest little thing since the appletini and just as sickeningly sweet, but I know they're just card-carrying hypocrites who don't give a rat's ass about anyone else but themselves."

"Oh is this the part where you go on about how Daniel and Jennifer are the wind beneath everyone's wings? Because if so, you might want to have a barf bag ready," says Theresa.