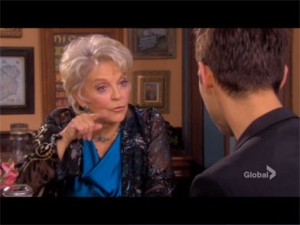 This week’s theme: Stuck. Gabi’s stuck on stupid, and Nick’s stuck on Gabi, Liam’s stuck on Jenn, and a few couples are stuck on snore. It was an ‘okay’ week. Nothing to write home about but we did get further in a few stories. Let’s take a look:

WilSon.
Will and Sonny’s wedding lasted three days real life from beginning to end but as of Tuesday it was still the same day in Salem which confused many viewers. Maybe the wedding was before noon or something. At any rate, Sonny and Will spent their wedding night talking about Nick. Not the best start of a marriage but they’ve never been all that exciting to begin with. Thank goodness Will has Sonny, because he needs him to fight this battle against Nick.

Julie.
It’s always nice to see Julie but her return just to meddle in Nick’s life and yell at Sami for no reason was a downer. That she was surprised Nick wasn’t invited to the WilSon wedding was too unbelievable after all Nick did.

What was it all for?
JJ, Abigail, and Jennifer made such a huge deal about those boxes for the wedding but nobody even opened them. It’s like starting a joke and never telling the punch line.

Dropping the ball.
Well they certainly dropped the ball on the Abby/EJ possible preggers storyline. EJ started practicing his Lamaze breathing until Stefano let him know Dr. Garcia didn’t lie and that Abigail isn’t pregnant. It’s almost disappointing – not because viewers wanted Abby to be pregnant but because some had expectations for this upcoming story to have an explosive impact on EJ and Sami’s relationship. With the actress’ departure nearing the end of the year it’s surprising they didn’t go there. Not to mention that’s as soapy as it gets.

Dropping the jaw.
Stefano DiMera is known for being refined. A little grappa, classical tunes on ah…the ole phonograph, a classy dinner and a gorgeous dame at his side… Then he said this: “As long as Samantha doesn’t find out you’ve been banging Abigail Deveraux.” There are no words.

Jafe.
We got a double dosage of boredom with Jafe and Dannifer scenes. There was more blathering about Jordan’s secrets and not even one hint as to what it’s all about. What a rip off. Jordan compared Rafe not wanting to discuss his sister’s death with her own secret. It’s hard to even wager a guess as to what her secret is about and it feels like we’ve aged ten years since the story began. It’d better be bloody good once the story is out which from the speed it’s being written may be sometime in 2016.

HRH and her royal subjects.
Her Royal Hortonness peed her royal panties with glee that JJ’s perfect new girlfriend Paige wants to go into pre-med like the other perfect Hortons. She then did something not so perfect and judged JJ’s friends, calling them “potheads.” It almost makes some want to root for Liam to take her out…

“Back To The Future.”
Liam spent the week eavesdropping on Jenny and getting ideas on how to be creepier like Ian McAllister from reading an old “Days” 2012 recap from Jenn Jenn’s email where Ian spiked Brady’s protein shake in order to make him look bad in front of Madison. Great Scott! Watching that storyline all over again so soon is going to be rough. Maybe worse because Liam doesn’t have those quirks Ian had like the fun dialogue, the cane, and that smooth accent. He does, however, know how to clean up his crime scene.

Maggie.
Though it’s annoying that Maggie can’t be around Brady for two seconds without mentioning his addiction or fling with Theresa, she did get an answer to a burning question – why Theresa? We thought it was just because she was easy to downward spiral with but it turns out he doesn’t feel pitied by her. Hmm it’s understandable. This should be interesting once Kristen returns.

Moving on.
Abe’s scene with Jennifer about his guilt over moving on with Maxine was touching. Jenn understands the guilt and helped him close that chapter of his life. Well done. It makes it more exciting for him to move on with Maxine.

Extra! Extra! Read all about it!
Lucas disowned Kate...oh wait. That’s old news, too. What is this the fifth time? Poor Lucas never learns and now he again loses the girl. Sucks.

The slap.
Sami needs to learn to count to 10 before running off at the mouth, especially to the mother of her grandchild. Obviously Gabi lied about being with Nick that night. Anybody would rather than be the brunt of Sami's wrath. Gabi finally got a back bone and gave her baby's Grandma a smack. Who can't wait for Monday to see Sami's reaction?

Ericole.
Eric sure is enamoured with the church guidelines. Some viewers find it difficult to believe considering he has only been a priest for about 9 months of his 30 some years. He has spent more time in bed with Nicole. He explained his dedication to the church and it made perfect sense but in the end love won out. Shame Nicole's got that monster secret that will ruin them.

Bo, Hope, and Aiden:
Bo’s name has come up a few times this week since his mother and father expressed sadness that he wasn’t at WilSon’s wedding. Peter Reckell mentioned “Days” on his Twitter feed this week. He said, “Going back to 'Days', I don't think that will ever happen as a long term commitment. Going back to close out Bo's story in a respectful way??? I would do that for you. You deserve better than what they have done to Bo. You have been very faithful and dedicated for years, decades!”

That'd be sad to see but would be better than keeping Hope hanging on to something that viewers know will never be. It’d feel bitter-sweet if Hope and Aiden get intimate while she’s still married. Who wants to see yet another relationship built on lies and deceit? Vote. What to do with Bo?

Just be happy Bo's not there to see Hope squeeze out her tea bag with her fingers like some sort of animal the way she did when she and Ciara were dining at the pub Thursday. What's next? Licking the knife after spreading preserves?

JJ, “I haven’t mastered the afternoon snack yet.”

Lucas, "She won't go away. She's like Malaria. She never truly goes away."

Stefano, "As long as Samantha doesn't find out you've been banging Abigail Deveraux.”

Kate, "You can do better than a simp like that."

Maxine about Dannifer, "Who wouldn't root for them?"