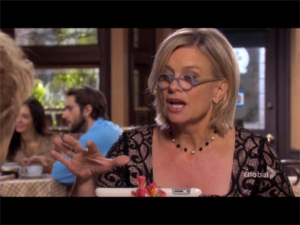 Television history was made this week when Will and Sonny (WilSon) were wed in the first gay wedding between two men in soap opera history. Other than that we’ve a few rants and a few raves. On with it!

Salemites clumsiness.
Adrienne broke the wind chimes which were part of WilSon’s wedding gift while running smack into Aiden, Gabi almost knocked Nick over at the park on her way to WilSon’s bachelor party…the list goes on. Having characters “bump” right into each other happens altogether too often in Salem.

Abigail and EJ.
Obviously Stefano had the photos taken of EJ kissing Abby. Some of us think he may have paid Dr. Garcia off to tell Abby she’s not pregnant when she in fact is. I don’t really care either way but it would create more impact by keeping Abigail pregnant. Stefano could ensure his grandchild is a part of his life and can try to split up EJ and Sami for good. Stefano does love to control his kids and he loathes Sami. If Abigail’s not pregnant, then many are not sure why the story was written at all!

Gabi.
So tired of her. If you need to hide a relationship from your family and friends, said relationship is not healthy.

Senseless lies.
First Nicole lies to Jenn about why she was ditching her during lunch, then she lied to Eric about being at work when she was really in the forest setting fire to the shredded paper. Nicole was beyond this for so long it’s hard to see her slip back into lying. Moocat, one of our forum members, says, “I’m surprised that Nicole didn’t smell like smoke after standing over that burning trash can.”

Dannifer.
What a mundane thing to have Dannifer argue about. How each of them keeps their finances. “It juliennes potatoes,” was the worst line perhaps ever and made Jenn look even more dorky. Sure I know this is furthering Liam’s stalking story but it couldn’t be less exciting.

Aiden and Hope.
Aiden didn’t tell Hope the name of his wife. Why would she even ask? They’re not friends. Where is this going? Hope should concern herself more with keeping Ciara away from Theresa and helping her daughter with her insecurity issues. It’d be pitiful to see Ciara turn into one of those girls who are so insecure they can’t leave the house without being covered head to toe in some brand name.

Bachelor party.
How on earth did Tad screw up and wind up getting a female stripper for the WilSon bachelor party instead of a dude? “Days” doesn’t need to resort to sitcom gimmicks to make people laugh.

The WilSon wedding.
Cheers and jeers: The wedding was one of the sweetest and most loving soap weddings written. Caroline's Alzheimer’s concerns were poignant and it was endearing to see Kayla lovingly write up her mother's speech even in those fugly blue glasses. The speech itself was incredibly written and acted. We all thought she was fumbling but she knew where she was going. Lucas and Justin trying to outdo one another all week over the best speech was really entertaining and showcased two characters who aren’t used enough. Victor defending his grandson’s right to marry whomever he wants to Herb was way too forced but still made us cheer. Eric’s gift of the cheese hat was cute and they have great chemistry but I have to admit I momentarily couldn’t recall how these two knew each other! I’m still getting used to nu-Will. Adrienne and Sami almost ruined the reception by competing in the cattiest manner. It was deplorable. I wanted to throw big books at their heads.

DiMera mansion.
Must Sami bellow at the top of her lungs at the children to get downstairs? They need to get into the 80s and get an intercom system. This will sound wacky but what if… oh I don’t know, if Sami supervised them while they dressed? Bets they were just hiding because they were embarrassed that everyone on their street could hear their mother roar!

Isn't it universal for everyone to make fun of BeDazzlers.
Matt (Of SOF Matt’s Musings) and I couldn’t figure out what was going on with the as Matt put it, “glitter explosion on those dresses.” Seeing these “Golden Girls” hand-me-downs from Dorothy, Blanche or Rose tailored to fit Kate, Sami, and Gabi was pretty scary. Hope and anyone else without glitter looked good. Thankfully the men were all dressed tastefully.

Selfless for one second...
Sami surprised Marlena and everyone else who watches “DOOL” when she said she didn’t want to ruin Will and Sonny’s special day with unnecessary drama. Just when you want to throw a big book at her head, she comes out with something sweet and kind like that. Nice touch, but then moments later, she bellyached about how jealous she was that she couldn't top her own son's wedding. There are no words...

Scene stealers.
Carmel, the CEO of the Church of Life and Energy, and EJ were amazing! Carmel looked as though he was working through Post Traumatic Stress Syndrome while recounting how Sami yammered the entire night during their date and how he witnessed "a horror show of oblivious self-involvement” that changed him forever. Hilarious. EJ dealt with him very smoothly, too.

Psycho Liam.
Meh. This storyline needs to be dropped. Matt said it all. “I'm always distracted by his hair. It's fascinating. It's like it has its own show and the rest of his personality is the commercial that interrupts it. I just find the fact that he's obsessed with Jenn too unbelievable, even for ‘DOOL’. Creepy and baffling aren't the same thing.” It’s also impossible to suspend disbelief that Liam easily got his hands on a key to both Jenn and Dan’s place and goes in and out during the day without anyone the wiser. What do you think? Liam is creepy or baffling or both?

Carmel, “I cannot be near Sami Brady or her vibration.”

Carmel on dating Sami: “It was a horror show of oblivious self-involvement.”

EJ, “Are you kidding? They seriously gave you a key to their home?”

Theresa, “I'd better go before the zombies get here.”