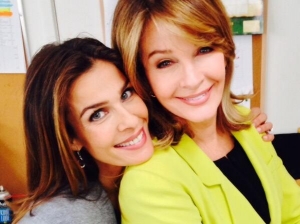 Feel the need to catch up with what your “Days of our Lives” actors have been doing this week? Take a peek at a cross section of their tweets from each of their Twitter accounts. This week they’re taking pictures while on set, one has a new book coming out, a birthday reminder from a fan, and one sad actor prepares to say goodbye to the show. So you’re aware, there may be profanity used in some tweets.

Horton loudly recapped the last episode of Downton Abbey that was still on my DVR. This bitch is officially on my sh*t list. #Days

haha! love it! @Ali_Sweeney RT: @Forever_SAFE Let's pose for a picture before I drown you. #SICK pic.twitter.com/groYlcxE4H

My latest @peoplemag blog about last nights @biggestlosernbc (with the cover art for my new novel out June 2nd) http://t.co/IBz1XD4t2g

Just in – my book cover! So excited 2 share with you!! like it? book info: http://t.co/5OHw6PlJNI #scaredscriptless pic.twitter.com/wyat0xhBZ4

I spent the most elegant evening at the Huntington Gardens courtesy of Hallmark. It was their annual media dinner… http://t.co/fHxQSDKcBF

Hi there! Glad you like the photos! I must tell you so you can stop asking, I have no information on Bo or Peter… http://t.co/Ea04UAJddr

I love me some Jen Lilley!! RT @jen_lilley: Seriously, @THEguywilson is the PERFECT recast! How cute were today's scenes?! #WILSON2014 #Days

Good morning everyone. Off to Salem. http://t.co/WDTNsEgwJP

Saying hello from Gaby's bedroom ! This is my last week on set and it's feeling sad ): but I know an… http://t.co/MnYVzxCVGU

Find out where to get tickets for the April Days of our Lives Events In Boston And Atlanta and follow one of the "DOOL" actors to Primetime to watch Riley Bodenstab on Justified.