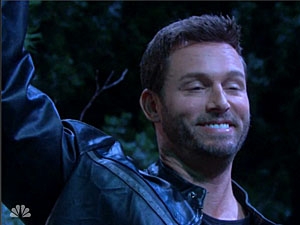 Happy New Year “Days” fans! Dustin Cushman filling in again for Christine Fix, who will be back from her vacation next week. This week was New Year’s in Salem, though New Year’s Eve seemed to be lacking in shocks and surprises in comparison to years past.

Club “Still Needs A Name.”
Club TBD was the scene for this year’s unmemorable countdown, with Sami, E.J. and others having to help out a swamped “T” run the place while Will and Sonny were caught up with the whole “Nick’s dead” drama. The fact that they still haven’t given the place a real name seems silly, especially if you missed the single show that explained the name means “To Be Determined.” After that party though, the club might end up going out of business. Next year let’s hope they return to the pier or Horton Square, at least we always knew something exciting would happen there. This whole story seems to be an attempt to recapture the days of Wings, Doug’s Place and Blondie’s, but it doesn’t seem to be working.

Brady gets high… again.
While some fireworks did go off in the night sky, they weren’t as high as Brady was. The week started off with Dr. Dan, Eric and Nicole all confronting Brady about being back on drugs. Brady tried to convince them that he was totally clean before going completely insane and threatening Nicole’s life with a bicep grip on her neck. Even after this display, for some reason the gang seemed to believe that the intervention worked when Brady promised to go to a meeting and get help. Hello! Dan’s a doctor, Nicole’s a former addict, and Eric was a priest who counseled troubled people. Why on earth would they just take Brady’s word? Eric at least used his smarts to check up on Brady to see if he went to a meeting, which he didn’t. Predictably he only headed straight for the park to buy more drugs. Given the fact that everyone in Salem seems to know this park is the place to score drugs, shouldn’t these drug dealers find a new place to conduct business?

By the end of the week yet another intervention was underway, after Brady got mugged in the aforementioned park and saved by Dr. Dan. Maggie was brought in, but even her usual powers of persuasion weren’t enough to convince Brady to get clean. If getting mugged and Maggie’s yapping aren’t enough to help him, Brady may just be doomed!

Hiding in the closet.
Will came barging out of “the closet” and learned the truth about Nick’s death, sending him into a panic. Perhaps if the Salem P.D. would monitor this closet they would be able to solve all crime in Salem. Will has been wrestling with his conscience all week over keeping this huge secret. Not only does he think they should all go to the police and turn themselves in, but he has been fairly judgmental of Gabi and the others. Normally I’m a huge fan of Will, but I just wanted someone, anyone to smack him upside the head. Can someone please remind Will that he shot E.J.! Someone remind him that Lucas went to prison for him, and that Sami, Sonny and others were there for him when Nick was blackmailing him. As Stefano brought up the little fact that he still had that evidence on Will, it’s probably a safe bet that all of their secrets are going to come out. When that happens they all aren’t going to be able to hide in that little closet.

Nick’s text messages, or lack thereof.
Though the evidence of Nick’s “death” is being contained by E.J. as best he can, even he can’t keep the fine citizens of Salem from wondering where Nick is. Abigail has clearly inherited her father’s nose for being nosey, and is starting to question why Nick is not answering her texts promptly. She’s determined to go to Hope with her concerns about him. Add Abigail to the long list of kids in Salem who Hope should hire to the police force, as they are the ones who seem to have a knack for uncovering anything. If Abigail happens to meet up with that persistent Percy, those two will crack the case wide open, because we all know the Salem PD won’t solve it without help.

Nick's body is still missing.
In a not so shocking reveal, Sami hallucinated and mistook a log floating in the river for Nick's rotting corpse. Now I am not Nick's biggest fan, but even a dead Nick is more animated than a log! At this point "Days" needs to at least let the viewers know where Nick is, because we all know he's not dead. Even Gabi began to think Nick might still be alive, though her hunch was based on the fake texts Abigail was getting. Yes, when even Gabi begins to think Nick could be alive, it's time to move the story along and reveal what has become of Nick.

The wedding is off?
E.J. continued to clean up after Sami and company’s mess at the river, and infuriated Sami when he decided to hold onto the evidence his men gathered. This led to yet another major confrontation between the two. Shockingly they didn't just end up having sex on the couch as they normally do to end the fight. For once real feelings were unleashed and real problems dealt with. Sure they screamed as normal, but things got said that needed to be said. E.J. felt Sami didn't appreciate all he'd done for her and her family, while Sami still couldn't get over the feeling E.J. knew more about Kristen than he'd told her. In a shocking move, Sami made an actual mature decision and postponed the wedding until she could trust him. Never did I expect to see the day that Sami would make a mature and informed decision about getting married, or not getting married as the case may be. However the show also needs to settle this story sooner rather than later, as Ejami fans are likely to boil over that the wedding has hit another delay. I actually felt that E.J. made valid points, questioning whether she ever intended to stop dragging her feet with him. The poor guy couldn't even get a kiss from her at midnight!

Nicole or Jennifer? Eric or Dan?
2014 seems to be starting off as the year of confused lovers. Nicole and Eric had a fun and flirty photo shoot, with Eric once again not wanting to face his feelings for Nicole. Nicole also seemed to be getting closer to Dr. Dan, and the two shared a sweet kiss at midnight. Personally, I think that Dr. Dan and Nicole are actually good together, and she clearly adores Parker. However she is still pining for Eric, while Dan still has feelings for Jenn. It seems those feelings may be fading. Even Eric seemed a bit taken aback when he caught Dan and Nicole together in a warm embrace. Given how saintly Jenn seemed to be acting lately, perhaps she and Eric should consider dating? That is if the whole priest thing doesn’t work out for him. Weigh in on this week's Days poll: Who should Daniel be with?

Jordan fascinates everyone.
Finally it looks as if yet another love triangle could be blooming, and this one is a bit too incestuous even for "Days." While the still unsteady Rafe stumbled around his apartment wearing a magic towel that a hurricane couldn't knock off him, Kate fumed at the idea of him and Jordan together. Kate asked Lucas to help her look into what secret Jordan was hiding. Unfortunately it seemed Lucas liked looking into Jordan a lot. Oh brother, here we go again! Is Lucas capable of liking any woman who does not already like some other guy? Hopefully Lucas will figure out from his many past mistakes that this won't work out, especially when it comes to competing with Rafe.