Days of Our Lives Weekly Blog 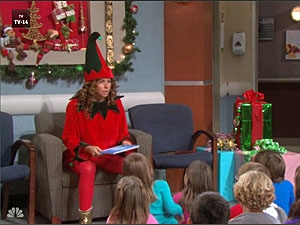 Hello “Days” fans! Dustin Cushman here subbing for Christine Fix who is on holiday this and next week. This week was Christmas in Salem, which meant the hanging of the Horton Balls, the reading of The Christmas Story at the hospital, and of course a visit from Santa. Apparently everyone in Salem has been naughty, so Santa delivered Stefano back to town.

Naughty or nice?
Stefano is still trying to be good in order to keep his promise to God, which he made in order to save Chad’s life. I’m sure it will last as long as all his other promises to God and reformations did. He tried to make good with Kate and Rafe, but neither wanted to hear him out. He then told Hope that he didn’t know where Kristen was and hadn’t heard from her. That was likely a lie, so he didn’t even make it till the New Year without lying and scheming!

Who is Jordan?
The mysterious Jordan Ridgeway continued her flirtations with Rafe, but she also contacted home to say how much she was enjoying Salem. One could take that to possibly mean she’s not from Salem? Is she merely a con artist, or is she connected to someone in town? Nobody comes to Salem without a reason. Most likely she’s someone’s long lost kid. Please don’t let it be Stefano! Knowing “DOOL” though, she’ll turn out to be another kid that Kate gave up, a child with Stefano. That would of course bring Stefano and Kate back together, while also creating tension between mother and daughter over Rafe. Weigh in on this week’s Days poll: What should Kate do?

In the closet?
Gabi, Kate and Sami all continued to panic that they’d be found out for Nick’s murder. EJ was livid with Samantha for keeping this a secret from him, as everything seems to be unraveling for her. Sami and EJ’s conversation about Nick’s death and who knows was the funniest bit of the whole week.

Unfortunately for Sami and company, the evidence linking them to Nick and the scene of the crime is coming out of the woodworks, no matter how hard they try to cover it up. Hope and Julie are also starting to wonder why he never made it to New York. EJ and Sami attempted to clean up the scene of the crime yet again, but the week ended with Nick’s body floating to the surface of the river, startling Sami. Was that really him though, or is this just another one of the imaginary hauntings plaguing Sami and Gabi? It’s probably the later and a safe bet that Nick is alive and hiding out in the Horton cabin plotting his revenge. I could definitely see some revenge plot of Nick’s that is a cross between “I Know What You Did Last Summer” and Pretty Little Liars.

Christmas Grinches.
Christmas wouldn’t be Christmas without a visit from Doug and Julie. Unfortunately Julie seemed to leave her Christmas spirit out-of-town as she spent the holiday insulting JJ, Maggie and Abby with various "I told you so" lectures. Too bad Doug didn’t shut her up with his singing, which would have been welcomed at that point.

Julie wasn’t the only one bringing down the spirit of the season, as Anne the Grinch tried her best to ruin the reading of The Christmas Story at the hospital. She attempted to hijack it with her own story choice, until Doug and Jenn arrived to give her the boot. For once it would have been nice to see what Anne had planned. The Grinch? Krampus? Her story couldn’t have been a happy one.

Speaking of Grinches, Theresa didn’t even take off Christmas in her quest to ruin Jenn’s life. Had JJ not burned every brain cell in his body getting high then he might realize he could call her blackmail bluff and threaten to send her back to prison. Then again, there would be no storyline if JJ got smart!

No show Bo!
There was no real shock to anyone when Bo failed to return home, and "DOOL" really needs to just find a way to write him out at this point. This has gotten ridiculous. The writers could say he’s back together with Carly or Billie and just doesn’t want to tell Hope the truth. As much as that would anger the fans, this dragging on of him in limbo is worse. Ciara was sad that her dad didn’t come home, but hanging his Horton ball on the Christmas tree made her feel like he was there. Did anyone notice how quickly she got over her dad not coming home? She was more upset about losing that earring to Sami!

A Christmas miracle.
The Christmas miracle of the week was Victor giving an apology to Maggie for what he did to Marlena and Eric, admitting that he let protecting Brady override everything else. If only it were this easy to reunite other couples in town. Victor even went to make amends with Father Eric over what he did to him, yet still has to apologize to Marlena. It was good to see Father Eric in some reasonably fashionable attire for a change. Hopefully Santa brought him even nicer clothes.

Is everyone in Salem on drugs?
Not so shocking was Brady getting high for Christmas. I bet you can’t guess how he will celebrate New Year's? Poor Brady, he picks a girl, falls in love, loses girl, falls off the wagon, gets back on the wagon . . . repeat! Enough already! Maggie is already onto him, and Dr. Dan and Nicole finally figured him out too. Coming soon, a very special episode of "Intervention" "DOOL" style. It’s too bad he couldn’t have invited Theresa to get high with him, she needs another coma about now.