Soaps.com: Is Jordan scared of her feelings for Rafe? It looks like it is causing her some distress.

Stause: Jordan is definitely scared of her feelings for Rafe because she does take her job very seriously and it is not very professional. What is airing now, you see that they are joking that once he is in his new living space she is going to be fired because he wants to date her, which is very cute. So then she is going to relax for a little bit because she is no longer going to be his physical therapist. I think that is when you are really going to see some chemistry between them and see her relax, because now she still feels she is being a bit unprofessional. There is some good stuff coming up between the two of them.

Soaps.com: How does she feel about Kate (Lauren Koslow)? Does she make Jordan nervous?

Stause: At first she wasn’t nervous about Kate at all. She found her to be a bit overbearing, but she didn’t even give her a second thought. Now, we see that Kate is making it very obvious that she is going to be investigating Jordan’s past, and Jordan does have a lot to hide. And once her feelings for Rafe get stronger she is going to have a lot to lose. We will see that dynamic come into play where even though she acts like she is not afraid of Kate, we will see that she is slightly afraid of the fact that Kate was able to pull up some stuff from the past and how it could affect her life.

Soaps.com: Who have you loved working with?

Stause: I work a lot with Galen Gering and Lauren Koslow, and I have to say I love the two of them. We have a really fun dynamic when the three of us get to work together. When I am working with Galen it is very fun and relaxed. And it is silly and ridiculous. And when I am with Lauren, her character pulls a different side of Jordan out than I get to play in any other scenes, so it is really fun when I get to work with her. I love those two. Lauren is so unlike her character. She is so relaxed and has a farm and it is so fun to get to watch her snap right into this bitchy character so well. I love her.

Soaps.com: Anyone you hope to get to work with more?

Stause: I love Kate Mansi (Abigail), she is one of my girls outside of work. We have gotten to work together a little bit, but I would love to work with her more. And obviously, who doesn’t love Stefano (Joe Mascolo)? He is one of the best characters of all time, so I would also love to work with Stefano. I think his character is the most fun character on the canvas.

Soasp.com: You were on "All My Children" for years. Any former co-stars you’d like to see pop up in Salem?

Stause: There would be a million of them. Of course my best friend in the whole world is Melissa Claire Egan (ex-"AMC's" Annie, "Y&R's" Chelsea) but she is currently taken and is on "The Young And The Restless." But I would love for us to be on the same show again. That would be fun. I’d love it if Susan Lucci (ex-"AMC's" Erica) came in and did a little cameo. I can see all kinds of potential for all kinds of people.

Soaps.com: How did you feel when "All My Children" ended?

Stause: I was on "AMC" two months shy of seven years. It was a big chapter of my life and I am sad to see it go. But I was also ready to see what else it would bring. I was in a place in my life that was more go with the flow, but I was sad to see it end because it was kind of like a family that was being broken up. But it was also an exciting beginning because you would end up doing that forever and you wouldn’t push yourself to go and try other things.

Soaps.com: Do you have any special holiday plans?

Stause: I am going with my best friend Melissa Claire Egan on a couples’ trip to Ojai on New Year’s Eve, so I am super excited about that. And for Christmas I am going to do something a little more intimate with my man. We are going to celebrate and exchange gifts and make some new traditions for ourselves.

Some characters are all about mystery, and when it comes to Chrishell Stause’s new character on “Days of our Lives,” mild-mannered Jordan Ridgeway, the secrets just keep piling up. Despite being slightly under the weather, Stause took the time to chat with Soaps.com about her warm welcome to Salem, Jordan’s relationship with Rafe (Galen Gering), and with which soap star she will be spending New Year’s Eve.

Soaps.com: How were you first approached about joining “Days?”

Soaps.com: It has been a few years since you have been on “AMC.” How did it feel getting back in the soap world?

Stause: You know, I have to say that so much of the crew from “All My Children” were there! I didn’t know this but soon realized there were so many familiar faces from boom mike operators to camera operators to casting. It was crazy. There were so many people I knew already, so it kind of felt a little like a welcoming wagon when I walked into “Days of our Lives.” I knew some of the crew, I knew some of the cast, so it was a really great environment.

Soaps.com: Jordan is pretty mysterious, and with all of her ID cards wearing disguises, we think she is on the run from someone. Will it be long before we learn more about her background?

Stause: Honestly, I would say that people need to be patient with the storyline because it is definitely not something that is going to be revealed very quickly.

Soaps.com: What kind of person is Jordan? Is she the good person Rafe thinks she is?

Stause: Jordan is definitely working with a good moral compass. Whatever is working against her that she is fighting or running from, her job profession is to help people and bring them back from a terrible accident, so I think her moral character shows in her job profession alone. She really does want to help people and she is a good person, because it takes a certain type of person who wants to be a physical therapist and really heal people. Obviously some things have happened that she needs to run from or that she is afraid of. But she is clearly working with some good moral character and takes her job seriously. She gives some tough love but she gets results.

Days of our Lives Spoiler Video: We Need To Talk 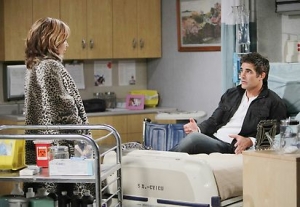