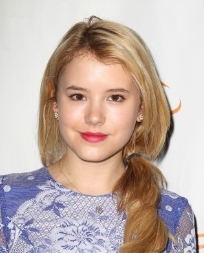 Former “Days of our Lives” star Taylor Spreitler (ex-Mia) has just signed up for a new project. She will be playing the role of Molly Moretti in the film “Bethlehem.” Set in a small Pennsylvanian town during the 1980s steel crisis, the film tells the story of a high school boy, his grieving family and his baseball team. It co-stars Christine Lakin (“Family Guy”), Devon Werkheiser (“Greek”) and Corbin Bernsen (ex-Todd, “The Young And The Restless”). The drama is still in production but is set to be released next year. Soaps.com will update you as more information becomes available.

Spreitler played the role of Mia McCormick from 2009 until 2010. Since leaving Salem behind, she co-starred on the sitcom “Melissa & Joey,” but also managed to make appearances on “Never Fade Away” and in the TV movie “Stalked at 17.” Next year, the actress can also be seen in the movie “Category 5” starring Burt Reynolds (“Boogie Nights.”).

Don’t miss the mayhem in store this week on “Days.” Take a peek at Soaps.com’s Days of our Lives Weekly Spoiler Video: Rocking His World. And then find out why Ziggy needs to be rescued on Hollyoaks.