Dannifer break-up take ten.
This back and forth garbage with Jenn and Dan has gone on way longer than anyone can stomach. Please, either put them together or keep them apart. Our heads are spinning and as for JJ goes, if viewers can’t respect Jennifer, how the heck can he? Jennifer’s plaintive whining to her son was the worst this week. The worst. It’s even more irritating that 19 year-old Abigail stuck her nose into her 46 year-old mother’s love-life by going to Daniel to beg him to reconsider breaking up with her mother. One, she doesn’t know the whole story, two, she’s too inexperienced to even understand an adult relationship, and three, it’s none of her freaking business. Doesn’t the doctor get enough of this crap from his mother?

Friday wasn't Jennifer's day. She found out about JJ's arrest and got in his face, calling him out for every misdeed he's done since he returned home. I think she hit rock bottom and it was just awful to watch. JJ should be thankful he doesn't have a mother as harsh as Rory's. I felt so bad for the kid. If Rory's mum kicks him out, it'll only get worse for him.

Shame Theresa wasn’t there to share in the arrest... I'm still miffed with her for throwing Vargas under the bus.

Mysterious Jordan Ridgeway.
At this point I couldn’t care less about this character but obviously she’s not who she appears to be or Daniel wouldn’t have had that ‘omg wtf’ look on his face when he recognized her surname. And with Kate already complaining to Kayla that Rafe has regressed in his therapy already, um after two days, should we be worried Rafe’s in danger from this physiotherapist? Who is Jordan? Vote!

Vulnerability.
Kate’s guilt over Rafe’s predicament has been weighing on her for months and making her overprotective side shine. This usually means danger for whomever she feels is threatening. She went after Kayla, blaming Jordan for Rafe’s therapy so-called off canvas um..."setback." When Kate heard Stefano was able to just waltz in and pay Rafe a visit. Kayla could have lashed out but she was very thoughtful and calm. She was sensitive to where Kate was coming from and didn’t let Kate walk all over her. She firmly told Kate the proper channels she could take in order to get what she wanted, and Kate respected her for it. It was one of the better moments of the week and didn’t stop there. Maxine also took a moment to lend support to Kate which was very sweet. It’s nice to have others acknowledge this side of Kate.

Foreshadowing?
It sure feels as if cigar savoring Stefano is on his way out what with all the threats directed towards him. Without our biggest villain, there's sadly nobody to take his place. Kristen's leaving, EJ's a pussycat. The one thing that has always separated "Days" from any other soap is the great villains. Maybe they should bring Ian back.

Nicole to Brady: "We were all so excited when you finally found your brain. Too bad it didn’t last long."

Nicole, "You're Sami's mother. You must have a scheming bone in your body."

Stefano to EJ: "You have the look of a weak little puppy."

Please let me know your thoughts on the week and have a great weekend. 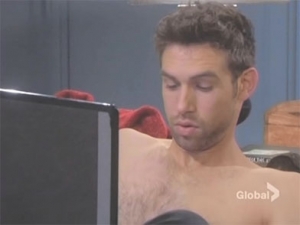 This week dragged on just like the week previous and then got a wicked jump-start Friday with Sami’s trial about to start and Jennifer looking at her son without those rose-coloured glasses. Let’s break things down.

Lonely heart.
Sonny found a condom wrapper at the apartment and flew off the handle at Gabi for having sex with Nick of all people. Can’t blame Sonny but he should be thanking his lucky stars she had the foresight to use a condom so she doesn’t have yet another unplanned pregnancy. I get that Gabi’s lonely. It can’t be easy to be in her shoes, even though she does have Sonny and Will’s help, but Sonny and Will are right. For many reasons, she shouldn’t be with Nick but foremost, he hasn’t been through and has no intentions of going through intense therapy so he’s going to make the same mistakes. Poor messed up Nick. And as if he wasn’t creepy enough, what’s with the story he’s writing about Gabi – as Gabi? Matt says, “Maybe he’ll start wearing her clothes.” Oh one can only hope… “Maybe,” Matt says, “he’ll make a telenovela about her life using his computer cam and play all the parts.”

Sonny brought up Gabi committing a felony which makes me wonder if we’re going to revisit everything she did to Melanie soon. Will Gabi get hers? It appears we’re seeing a change in her demeanor suddenly what with her ferociously protecting her unhealthy relationship with Nick by threatening Sonny. I hope he tells Will.

Seltzer and Hitler.
Marlena was pretty funny toying with Kristen and spritzing her with seltzer in order to hack into her cell phone. Deidre Hall admitted the Cheney crack was ad-libbed. It was a bit shocking that she went there!

The jailbird’s inappropriate attire.
It all became clear why EJ was sending those tight cute mini-dresses for Sami to wear during her court appearances. He was tired of seeing Samanther in that fugly wife beater and needed some eye candy. He missed his fiancée. The letter he wrote was very sweet and heartbreaking. I feel for the guy but he’s truly not thinking lately, is he? He’s screwing up her case the same way he’s screwing with her wardrobe. I don’t like seeing him this way. Justin needs to get him to step away from Sami’s case and have Marlena bringing Samanther’s outfits. She needs to portray motherly innocence right now not bodacious babe. And what’s with the pretty locks? Do they have a stylist in prison? Remember when Kate was having chemo for lung cancer and she looked runway glamourous? Ridiculous.

I watched the scene after Sami shot Rafe and noticed a girl in scrubs kneeling on the floor talking to Kayla. She took something from the floor and wrapped it in a tissue before running toward the bathroom. It looked as though it could have been the razor.

Redemption?
Are the writers trying to redeem Adrienne in everyone’s eyes now? Is that why she’s the one who learned of the extra cash in tiny Tim’s savings account or is this too going to backfire for her once EJ gets wind of it and gives her the ole ‘stare down’.

Days of our Lives Saturday Teaser Poll: A Helping Hand