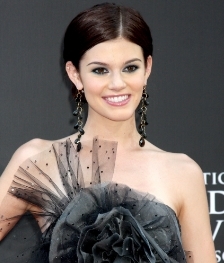 Fans of former “Days of our Lives” actress Rachel Melvin (Ex-Chelsea) will soon see her in something even stranger than what is normally cooked up in Salem. She has a starring role in the indie horror/comedy, “Zombeavers.” It follows college kids in the woods. Their weekend of sex and partying is ruined when they are attacked by a hoard of zombie beavers.

Melvin plays the role of Mary in the film which co-stars Bill Burr (“Breaking Bad”), Hutch Dano (“Breaking Fat”) and Rex Lynn (“Django Unchained.”) It recently wrapped production and has been getting hype from “Time” magazine among other sources. No official release date is available yet. Melvin also recently shot a romantic leading role in the film, “Mr. Intangibles.” That film is currently seeking funding to complete production. You can learn more about it by visiting the Mr. Intangibles Kickstarter page.

Melvin played the role of Chelsea Brady from 2005 until 2009, receiving two Daytime Emmy nominations for Outstanding Younger Actress in a Drama Series.

For more side projects from some Salemites, check out DOOL’s Freddie Smith And Molly Burnett In Addicts Anonymous.. And then find out who ran down Robbo on Neighbours.

Days of our Lives Spoiler Video: Don't Eat That!