The pimpin’ resumes.
No matter what obstacles come in between Daniel and Jennifer, nothing will make me care about this couple. Jenn’s torn between Dan and her son and this waffling every week on whether or not she should be with Dan is bloody annoying. At this point I almost want Daniel to find solace in someone else’s bed but if he did, it’d only create more rallying to get these two back together. Gah!

She may be better at creating PR disasters everywhere she goes.
Jenn got an award for her work in PR? She’s barely in her office, she was under suspicion for ‘pushing’ a pregnant woman down some stairs, she had a lover’s quarrel in front of half of University Hospital’s staff with their numero uno surgeon, and instead of finishing that article on Dr. Jonas that someone has been bugging her about, she took off mid-day to get it on with said surgeon. Yep. Award-worthy. May as well give SPD an award for best detective work.

Anne and Theresa became allies but again, only to pimp Dannifer. Somehow, Anne thinks she can actually put a stop to Theresa getting fired. I’m not sure how that’ll be possible.

JJ and Theresa?
This cat and mouse game between JJ and Theresa is getting old. This isn’t the summer storyline many fans were hoping for. JJ needs to let go of his borderline obsessive interest in Theresa. The girl isn’t into him except as her dealer. He needs to open his eyes. So does she – about Daniel.

Grandma and Granddaughter.
Caroline told Theresa to get rid of that chip off her shoulder because it’d only hurt her. Theresa’s not ready to hear it. She’s far too defensive which makes me wonder exactly what happened in Los Angeles and what kind of mother Kimberly is.

Love triangle?
I don’t even know if what Chad, Abby, and Cameron have could be called a love triangle. Rule of thumb is, if you’re torn between two men, dump them both and move on. It's no wonder Abby can't make a decision being Jennifer's daughter, but one of those guys should have some self-respect and bow out. I suppose Cam gets the girl what with Chad dying of a brain tumour. Why keep it a secret? He needs support right now and should be asking for more than one opinion. 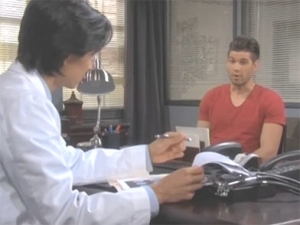 Not a lot really went down this week. Fans are complaining that lately there’s a lack of continuity, it’s taking too much time to wrap up new storylines, and some storylines are getting dropped for far too long and when they’re picked up again there is a different feel to them. At least the dialogue has been funny. Let’s break things down.

Sad Will.
Summed up in a sentence, a member of our forum, Flightygirl, says, “Will’s insecurities are realistic but not entertaining.”

Jailbird blues:
If our little jailbird Sami didn’t have it rough enough, Marge ‘no shrinking violet’ Bernardi paid her a visit in jail to rub her nose in little Timmy losing his father, thanks to Sami’s bullet. She even hoped Sami would never see her own children again. Ouch! When Sami’s vindicated, Marge will have to eat those words. Do we think Marge knows her husband was on the take or not? Either she had Joe cremated in order to save money for Tiny Tim’s college fund as she claims or she’s just feeling vindictive after losing her husband. There has to be some twist coming up.

“Last best.”
Sami’s been in jail too long and the writers are writing her dialogue as if she’s 17 and not 35. When she and EJ were discussing their upcoming nuptials, it was supposed to be a romantic moment but she called their upcoming marriage, “My last best and most important one.” Then she talked about this being her “last best chance in getting out of here.” Last best? Totally ruined the moment. Please, let’s find the murder weapon already, get her out of jail, and start writing this mother of four with some maturity as they did during Friday’s episode with her encouraging Sonny not to throw away his mother. That was very decent of Sami!

Marital woes.
Is Adrienne and Justin’s marriage close to being over? Such a great argument Friday which made me feel for them both. Many are already pondering who Justin could wind up with! There’s a shortage of women in Salem but let’s take it to the polls anyway.

Rafe’s frustration:
This story has gone on far too long. It was enough Rafe was in a coma for what felt like three years, but don’t these nitwit doctors see that Rafe’s blood pressure is “elevated” because they’re keeping things from him? Mine was elevated just watching his frustration. If they’d tell him what’s going on, he’d chill. And all this discussion about Kate hiring Jordan Ridgewood as Rafe’s physiotherapist is going to come back and bite her in the arse. I feel another stupid love triangle coming on when these two are barely a couple yet. Oy.

Nicole’s so-called secret.
Nicole’s reasons for hiding her love for Father Eric actually make sense but she’s worried she’ll become a bad girl again when I’m wishing she would start scheming again. Eric knows she’s in love with him and didn’t confront her about it yet chose to confront her about having meaningless sex with his brother? Is he jealous? He looks jealous. It’s not like he was a saint before ‘priestdom’ so he couldn’t be shocked that Nicole could jump in the sack with someone so easily. Everyone in Salem does this! We need to see some development in their story but it looks as though we’re back to square one. With Kristen working closely with the priest she defrocked, making many fans throw up their arms in disgust and walk away from the TV. One rave…at least “Krissy” and Nicole should continue to provide entertainment with their snappy one-liners!

Is that the end of Daniel and Mason Ventura looking into Eric’s illness? Kristen jumping out of a second-story window unseen? It feels unfinished.