I wouldn’t mind if we moved into the 20th century with the pop culture references. Lucas made the second reference to Eddie Haskell. I’ve never seen "Leave it to Beaver," but can guess this Eddie Haskell twit was a little scamming drug dealing hooligan who would lie to the pope but Matt assured me Eddie was harmless. "JJ is more like Dennis the Menace," he says.

Anne popped up to badger Theresa about doing paperwork and then Jenn for not keeping Theresa on a tight leash. Theresa really does need to do the freaking HR paperwork already. What kind of a hospital or any business for that matter, allows an employee to start work without doing paperwork?! If Anne was in Jenn’s shoes she likely would have dragged Theresa by the hair down to HR. Actually that’d have been fun, though I think these two will soon realize they've a lot in common. Both hate Jenn, and both want Daniel. Matt says, "Theresa literally offered Daniel her ass on a plate and he wasn't interested. When she discovers that he only goes for women he has operated on, how far will she go?"

Love Maxine but surely she has more to do than beleaguer Daniel about Jennifer? Hope too. She showed up, a self-appointed Maggie, at Jenn’s work, to pester 'cuz' about her lack of a love-life. No wonder Jenn has so many meltdowns. She needs to go to the Horton cabin on Smith Island for a weekend alone. Really alone, like nobody needs to tell Daniel about it or any of that nonsense!

I get that Sonny is angry with his mother for submitting the attack tape to the DA. In his shoes I too might be the same, but to kick her out of his life is extreme. We’ve been there too many times when Lucas used to do it to Kate on a weekly basis. As for WilSon themselves, I'm having a tough time finding interest in Will's insecurities considering they're baseless.

Instead of wasting time trying to break Brady and Kristen up, Eric suggested he and Nicole pray and let it go. Probably for the best. Nicole’s got enough issues of her own to work through what with being in love with a priest who now may have finally gotten a clue!

It was loads of fun to see Kristen disguised as Susan (Mrs. Winston), but what a terrible idea to put on that disguise considering half the town could identify her and put two and two together. Can't wait for Monday's episode to see how she gets out of this mess.

Matt was on holiday this week so our guest blogger is Dustin Cushman. Read Dustin's Thoughts on DOOL. "Oh brother, the writers must really be in love with Jen and Dan, as they will come up with every possible scenario to get the fans to root for them." 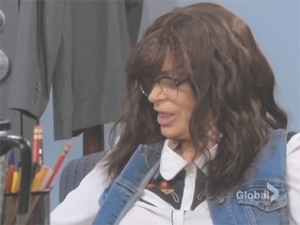 It wasn’t the most exciting week in Salem, but it had its moments. There were a few common threads, mainly people giving unsolicited advice, but by the end of the week things started to perk up and Friday’s cliffhanger left us looking forward to Monday. Let’s break it down.

Just when we started wondering where Vargas was, he popped up for two minutes to give Nick advice about not letting Jensen mess up his life again. Does that mean his storyline with Nick is wrapped up or will he return at a later date? Everyone’s giving Nick advice lately. Hopefully he takes it and gets help. It’s plain to see he and Gabi have feelings for each other but Maggie was right. He’ll keep making the same mistakes unless he deals with his past. Maybe Brady needs to be told this. Gabi also has some flirtation going on with Cameron but it’s early days. Plus, Abigail still needs time to stop stringing both Cameron and Chad along and decide who she wants. My bets are still on Chad, especially now that he will be irresistible because of the possible brain tumour.

Justin got to show off his legalese at the bail hearing. He has been on the show for ages and I don’t think I’ve really noticed him until now. He’s amazing. Great job of dusting him off and letting us see Wally Kurth and Justin shine. He’s really got his back up against a wall with DA Melinda Trask who not only has done her homework, she doesn’t seem to respect SPD which mirrors what we’ve felt over the years but she is taking it one step further and relishes putting Sami behind bars. It’s making for a lot of drama, and with Rafe possibly being called upon as a witness for the prosecution; it’s only going to get better.

Sami sure isn’t receiving preferential treatment in jail for being a cop killer. When she asked for water, the cop Abe hired to guard her dropped a bottle of water with three drops left in it just out of arm’s reach outside her cell. Everyone keeps asking why she doesn’t have a sink, but she does. She’s better off drinking from it.

Lucas visiting Sami was sweet and spoke to their history. Lucas is her one true friend. Sami’s really fortunate to have EJ on her side, too. Kayla says Bernardi likely didn’t die from surgery, so it stands to reason that someone at the hospital is on Stefano’s payroll who killed him after surgery and who knows Justin requested the body be exhumed. No surprises there especially since Stefano confirmed it over that mysterious call Thursday. I doubt they’ll get anywhere with this clue because it’s likely Bernardi’s remains were cremated or his body will go missing. It is Salem, after all. Thoughts?

JJ used his uncle Lucas to try to smooth things over with Jenn so he could get out of jail – I mean out of the house. It worked and he took the vial of ‘snow’ from Rory to give to Theresa who likes ‘skiing’ and then dumped it out in his pocket. He tried to get Theresa to snort his pocket lint and crumbs, but she wouldn’t hear of it. Yep.

Days of our Lives Saturday Teaser Poll: Flirting With Trouble