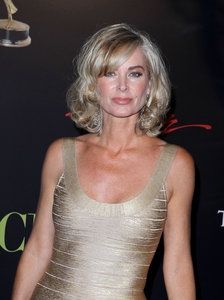 Soap Opera Digest is reporting that Eileen Davidson who made a return as Kristen DiMera in 2012 wrapped up her stint as the character on July 16. “The Kristen story wrap-up is just fantastic; she was just glorious. I am thankful for all she’s brought to us. It was the first shot in the arm we needed. A big shot in the arm,” says Executive Producer Ken Corday. Reportedly, the actress is taking time away from acting to spend time with her family.

Eileen Davidson took to Twitter Tuesday night to address the love, support and surprise from fans.

You're all so awesome! I didn't get fired. My family is fine. Thanks for your love and support! xoxoxo

Davidson also spoke to fans on her Facebook page, stating, “Hello! I just wanted to confirm that I have indeed left ‘DOOL’. My last day was July 16 but I will be airing until November. I’m taking some time off to enjoy my family however I am not retiring. Not really sure what’s next for me work wise. But I am looking forward to figuring it out!
Thanks to all of you for your support and love. I’ve had an incredible time on ‘DOOL’ this year.”

"Days of our Lives" first introduced the character of Kristen DiMera in 1993. Prior to being reintroduced in 2012, Kristen was last seen in 1998 being sold into a harem by her father, Stefano DiMera.

The character of Kristen DiMera is expected to be seen on screen until the end of the year due to "Days of our Lives" taping so far in advance.

Be sure to check out the "Days of our Lives" News Room for the scoop on Richard Bloore and Nick Schillace Joining the DOOL Crew and then read about the return of Venice The Series.