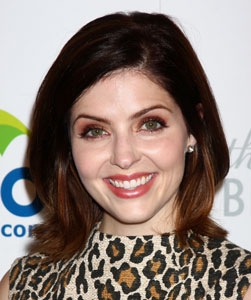 “She has major daddy issues.”

When Jen Lilley sauntered into Salem as Theresa, sneaking tokes with a teenager and causing Jen grief, we couldn’t have been more excited to have another bad girl on the block. Lilley spoke with Soaps.com about Theresa’s new friendship with Anne (“We are like an evil Lucy and Ethel.”) as well as how it feels to shake up the Horton clan and why her parents are to blame for all of it.

Soaps.com: So were you a fan of the show before you got to Salem?

Lilley: No, I wasn’t not a fan, I just didn’t watch soaps growing up. And then when I did, I was just watching “General Hospital” clips. But I’m a huge fan now and it really took me by surprise. I watch “Days” now even when I’m not on to see what’s happening. I love it.

Soaps.com: Why don’t you tell us a little bit about Theresa and who she is.

Lilley: She is Shane [Charles Shaughnessy] and Kimberly’s [Patsy Pease] daughter, and the background there is that Kimberly Brady was off and on, and off and on, with Shane Donovan, who is Theresa’s biological father. And Kimberly was a prostitute, and she was with Victor Kiriakis [John Aniston]. Shane, as my understanding has it, was a spy and he was sent to take down the Kiriakis family. Theresa knows her mom’s background, and her dad was absent. Her whole childhood she grew up without a dad because Shane left when she was about 1 year old. Being a woman, you can relate on some level that girls who didn’t grow up with dads or who don’t have a father figure in their life, often they are looking for approval in other men. Oftentimes, not in healthy situations. And I think that Theresa is very promiscuous and I think that she is attracted to older men because she has major daddy issues.

Also, she knows that Kimberly was a prostitute. And that’s hard because Kimberly put herself together and created a new Kimberly as a put together child psychologist, which is also awful. Theresa has grown up with this person who was a prostitute and now she’s trying to act all prim and proper and wear Kate Spade clothing and analyze all of her thoughts, which is hard. But then to justify Kimberly’s actions, I can’t imagine being a single parent. Kimberly is compensating for two parents so she is being overly strict which, is a formula for trouble.

I think that Theresa is really troubled. I think that she uses drugs and sex as an escape. She doesn’t want to deal with her mom’s psychoanalysis, which is probably true. And I think that she feels really unloved and has dealt with a lot of rejection. Second, she sets people up to not like her because she can’t deal with rejection. So she is going to have people reject her before they even say two words to each other.

She’s an interesting character, but at the same time she makes poor choices and I think that she is really nasty and mean spirited on the inside. I think she’s really jaded and I don’t give her many excuses for that.

Soaps.com: What about JJ (Casey Moss)? Does she want friendship from him or just drugs?

Lilley: I think that she is using him for drugs. I think she’s amused by him a little bit. I think there is a part of her that likes him a little bit, I’m not sure whether she likes him sexually or not. I think that she is just kind of amused by him. She sees him more as a pet. And I think that as time goes on, especially the episode that aired the other day when JJ was talking about how things are different since his dad died, there is this moment where Theresa has this mini-freak out because she didn’t know he was going to be so vulnerable with her. She didn’t know how to make him feel better, so she just went into herself. Sex and drugs, that’s what makes her feel better so that’s what we’re going to do. So I think there is a part of her that relates to JJ on a deeper, personal level. She feels they are cut from the same cloth and has some instinct to protect him, but mainly she is using him for drugs. And that comes with people who are heavy users and have a history of using.

Soaps.com: We know you start to have a thing for Dr. Daniel Jonas (Shawn Christian). What are your thoughts about this?

Lilley: I love it. Please, Shawn Christian is an amazing actor and he is also very attractive. I’m okay with that. I also like older men as well, me, Jen Lilley does, so I am totally okay with it! I think that it’s fun and hope it happens. I think Dan and Jennifer [Melissa Reeves] are really cute, and as Jen Lilley I feel really sorry for Jennifer. There are scenes where I can hardly make eye contact with Missy because I feel I might cry for her because this girl is putting her through the ringer. But at the same time, as a viewer, we need to do something with Dannifer. Are they going to get together? Are they not going to get together? Let’s shake it up! And I am totally okay with being the vehicle that shakes.

Soaps.com: We think Teresa needs a girlfriend. Any prospects?

Lilley: Yes! I think Anne [Meredith Scott Lynn] is a prospect. Anne and Theresa are slowly developing a relationship which will become evident as of next week, so I’m not spilling any beans there. I always think that we are like an evil Lucy and Ethel. We have a marvelous time.

Soaps.com: How is it different creating your own character on "DOOL" versus stepping into a known character like Maxie on "General Hospital?"

Lilley: It’s a huge relief. At the same time there is a Herculean task ahead of me because I don’t do drugs. At all. I believe in abstinence. I am the polar opposite of Theresa, so that in and of itself is very scary and challenging for me. I’m constantly watching these amazing documentaries from the UK where they show people getting high on any drug you can put on YouTube, so I’m always watching people do drugs and just studying. So it is scary for me, but at the same time there is this huge relief that comes with it. I feel like I am part of something and I’m not stepping on anybody’s toes. And right now I just have to focus on acting and make sure I’m not overplaying or underplaying the drugs and how people like that act. It’s fun, but it has its own challenges.

Soaps.com: Any drama when Theresa’s mom heads to town?

Lilley: Oh, so much drama. I’m so excited about the scenes. Patsy Pease is amazing. I have been watching the clips, and her nonverbal acting with her eyes - she is like Bradford Anderson [Spin, "General Hospital"]. She is just amazing and I’m really excited about that.

Soaps.com: Any other projects you are working on right now that we can look forward to?

Lilley: There is a comedy series I’m still working on called "Dating in LA and Other Urban Myths," so it is about the ins and outs of dating in LA, but I think anyone in the country can relate to it with all of the online dating. It’s just very blunt and bold comedy. Other than that, we’ll see what comes during hiatus week. But I’ll always be working on something. I don’t like to stay still.

Andalusian Industry Unites in the Face of Pandemic