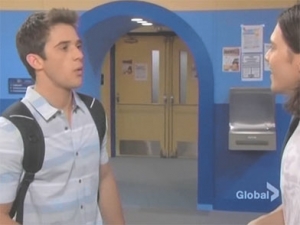 This week was filled with juicy, yummy drama.

The Sami Show.
Poor Abe had to arrest Sami at St. Luke’s Academy during Bishop White’s reception which was humiliating enough for everyone, but true to form, Sami made it even worse by making a spectacle of herself with a speech. The words ‘go quietly’ don’t compute. Nicole pointed this out to Father Eric. Though she was right, he didn’t need to hear it and she’s no angel either like Brady pointed out later in the week, so she probably would have been better off snickering at Sami’s self-created mess as any good Sami hater would have done and left it at that.

Sami called the video of her attacking Bernardi a set-up. True though it’s actually valid evidence and nobody forced her to attack the man. If she thought things through before acting, as EJ has said, she wouldn’t be in any of the predicaments she gets herself in. Though Adrienne’s reasons for handing it over to the cops weren’t without malice she did the right thing at least morally speaking and now is the one everyone’s ‘hating on’. If Abigail turned the video in would anyone hate her for it? It’s important evidence and there’s no love lost between Sami and Adrienne so it was no surprise she did this. Sami would have done the same thing in her shoes and I bet any Salemite who hates Sami or the DiMeras would have turned the video in. If Adrienne thought this through she would have asked the snarky DA to keep her name out of it.

Sami hasn’t any evidence as of yet to support her innocence. I think that’s what makes it such a compelling storyline. It’s nice to see the two sides going at it which makes for great drama and both sides have decent arguments. How will she get out of this? William coming clean to Justin about shooting EJ should help but they also need to find that razor and to get Stefano to admit on tape that he sent Bernardi to cut off Rafe’s penis. Ew…

Adrienne throwing stones at glass houses.
People keep pointing out Adrienne’s imperfections. She has a past, her family’s not perfect, her husband is a Kiriakis, so everyone thinks she should stop throwing stones but everyone judges, no matter what skeletons are in their closet. She’s no different. At least she took her time, struggling to make the decision before submitting that attack tape as evidence to the DA. She made attempts to talk to Justin, Sami and then Sonny about the video but nobody would listen. That’s mostly Adrienne’s doing. Does Sonny really need protection? Victor seems to think so. Maybe this whole thing is foreshadowing.

The scene of EJ stalking and frightening Adrienne was a nice touch. Very intense. I think Adrienne peed her pants. I wonder if she’ll tell Justin and if EJ really will retaliate.

Cameron and Gabi.
Again they snuck in a scene with these two making small talk and their chemistry shone but is Nick really out of the way for good even though he and Gabi annulled their marriage? You know how the writers enjoy their love triangles!

The ‘let’s make Brady’s life crappy’ song and dance continues.
It’s not going to be easy to watch these two reunite only for the truth about Kristen drugging and having sex with Brady’s priest brother to eventually come out and cause Brady more devastation. Still, somehow I’m enjoying being taken along for the ride.

I can't believe they're considering having Kristen put on that old Susan Banks disguise in order to stop Mason Ventura from finding out who poisoned Father Eric. Hilarious!

Nicole and 'Jenny'.
The ‘slice of life’ scene between these two discussing the book club and current events was nice. It was good to see Nicole reminding Jennifer that if she made it through Chloe and her vying for Dan’s attentions then she can make it through anything. Look out Theresa.

Resident bad girl.
Theresa’s got her sights set on Dr. Dan. Someone should tell her all she needs to do now is have him perform surgery on her and he’s hers. He won't notice her unless that happens!

Is she really that 'troubled' or is Theresa undercover for Abe? Vote and let Soaps.com know who you think the narc is at Salem High School. Then read our interview with Jen Lilley, who explains Theresa's MO.

YFN Lucci Claps Back At Haters Who Say He ‘Disrespects’ Reginae Carter: ‘They Don’t Know What I do’

‘Me & The Beasts,’ ‘Olivia and the Shadows,’ ‘The Night Belongs to Monsters’ Win Big at Ventana Sur

Selena: The Series Premiere: Grade It!