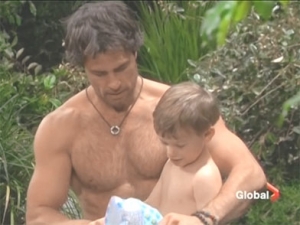 Will they see the sex tape? (NBC Universal Inc.)

It was harpy madness this week. The meddling mothers were out in full force, we watched a few characters worrying needlessly, the storylines are still pretty tight, and and we were entertained thoroughly. It was a good week.

The lake.
How nice to see the characters still going to the lake. We’ve seen some realistic dialogue about the weather, Kristen and Jenn dished about their love lives on that piece of driftwood, and Daniel putting water wings on Parker was adorable. I hope we see more of this.

Drama over nothing.
Kate’s decision not to sit at Rafe’s bedside on the off chance that he may not recall they were lovers was unnecessary and felt forced in order to show Abe and Kayla how she truly felt about Rafe. It’s strange the doctors didn’t fight her on this. Didn’t they say he needed loved ones around him? If he’s unsure why she’s there he’ll ask. If he becomes agitated she can leave. What if it backfires and he wonders why she’s suddenly ignoring him? Couldn’t that give him a setback?

Theresa and her big fatties.
Theresa keeps her stash at the office. At the hospital. Across from Her Royal Highness’ desk. Yep. She’s just as entertaining as Kristen!

Jenn’s still as daft as they come.
It’s amazing Jenn finally isn’t being duped by her son at every turn but her reaction to seeing JJ’s new fugly shoes was bizarre. After he told her they were Rory’s, she had two choices: Either believe him or call Rory’s mother. Instead, she chose to tell him to get them out of the house before she returned. Why did she threaten to call Rory’s mother instead of following through and making the call right then and there so she could catch him red-handed? Didn’t she think they could be stolen? She’s utterly clueless on how to parent and such a doormat.

The harpy.
If Sami was so powerful, she would have kept her enormous yap shut when Adrienne paid her a visit. Instead, she got in Adrienne’s face and made things worse for herself before Adrienne had a chance to talk to her about the attack video. While Sami exuded arrogance, like a miniature EJ, Adrienne sat back pursing those once smiling lips into bitter slits just waiting to pounce. Normally I would bitch about how much we don’t recognize Adrienne anymore but the protective vibe and over-the-top demands she’s been making on Justin work so well into the story. Even those hideous 1950s house dresses, the weirdo fashion accessories and that dreadful new hairdo add to her new persona. Adrienne’s quickly becoming Salem’s most annoying. I love it. Congrats to Judi Evans for doing a bang up job.

Life needed for resident busybody.
Another harpy is at it again. Sure her heart is in the right place, blah, blah, blah, but Maggie needs to know when to shut up and stop crying every time someone calls her on meddling in their affairs. Daniel shouldn't tell her a thing about his private life. Then she'd have nothing to gossip about.

Will Kristen do it?
I think Brady was about to forgive Kristen on Friday, but she was too distracted by her evil plans to see that. She sure picked a perfect time to show the bishop the video. She's so wrapped up in her hatred and revenge that she doesn't even see things will be worse for her when she outs Eric. At least he has Dan's toxicology report on his side as an excuse. What excuse does she have?

Since my last show for DAYS was taped on March 18th. I was shocked to hear of Fran Bascom and Paul Skippers demise. R.I.P. my friends

Nobody seems certain whether or not Drake has taped since March since he hasn’t been on Twitter much since that tweet in June, the studio’s keeping quiet, and he’s non-responsive on Twitter. Some media outlets thought his last airdate as July 17, but it wasn’t. He was seen July 18 and who knows if he'll be seen after that. Others say his name is no longer in the credits. Maybe he’s just recurring until he fits into a storyline. That happens all the time. We’ve no definite answers but Hogestyn’s fans are livid and don’t enjoy being kept in the dark. What do you think is happening with Drake? Vote!

Read this week’s Matt’s Musings on DOOL. A taste: "She was running around town like some kind of New Wave Hooker all week, trying to put the fear of God into everyone with her silver leopard print pants and a hairstyle that made her look like an extra from an 80s sci-fi movie. Adrienne showed up, dressed like an astronaut's wife at a picnic in the 1950s."