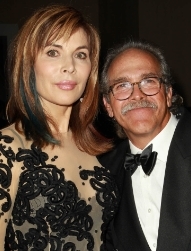 Back in the thick of things.

Things may start looking a bit different around Salem soon. Richard Bloore has returned to “DOOL” as the costume designer. Bloore is a veteran of the series, having previously designed for the show from 1990 until 2008, garnering three Daytime Emmy nominations for his work. He will be replacing Jayne Marie Kehoe. He isn’t the only person sprucing things up either. Nick Schillace has taken over as the show’s hair and make-up man. Schillace also happens to be the husband of Lauren Koslow (Kate).

Material featuring their work should start appearing around October 1.

Take a trip back to an awkward beginning in the Throwback Thursday DOOL Poll: Patch’s Debut. And then learn what message Georgie had for Maxie on GH.