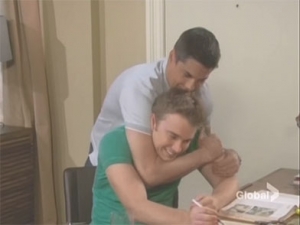 Special thank-you to Dustin Cushman for guest blogging while I was away. I’ve a lot to say this week and would love to hear your thoughts on the week we spent together in Salem.

What’s he up to?
I bought him not wanting to burn bridges but didn’t buy that Nick suddenly came up with a better formula than the one EJ stole from Kate. Just what did Nick give Kate?

Friends don’t flirt with their bestie’s boyfriends.
That being said, I really dug Gabi and Cameron’s chemistry. Abby should dump Cam, get with Chad, and Gabi can sniff around Cam.

“If it sounds like fun to you, don’t do it!”
I’m glad that Jennifer’s on to JJ’s manipulations but he still thinks he has his mother wrapped around his finger. Jenn did the unthinkable. She took away JJ’s lunch money and forced him to brown bag it when he was caught leaving school grounds. Oh no! What will become of him? JJ’s resourceful. He’ll probably just sell dope in order to pay for lunch. He’s no longer allowed friends over at the house either but he always makes Rory leave by the kitchen door so that’s no big deal either. I love that Jenn’s being firm with him but with troubled Theresa in the mix and Sami’s comment that Theresa reminds her of herself at that age should make for good drama coming up. Jenn’s going to need Daniel.

Nice to see Jeannie has a soft spot for Grandma Caroline, and she’s been seen only a few days. Interesting we’ve not seen any goodness come from JJ. Vote! Theresa is…

Justin, the hidden gem.
I love Justin being front and center, and his drama with Adrienne is very realistic. Is it safe to assume Stefano knows what EJ’s up to and is perhaps playing into his hands for some wicked entertainment? Face it; nobody can best Stefano at least not for long. Stefano still likely holds the key to William’s freedom!

Cecily sure is animated now. I don’t think I like or trust her which means they should show a bit of her protecting her man’s interest or working with EJ.

WilSon:
Poor Will. It was really sweet to see a father and son moment between Lucas and Will. It’s a shame Lucas isn’t around that often. Adrienne’s refusal to hear her son is only going to spell disaster for that mother and son duo and it won’t be Sonny’s fault!

Good to see Rafe open his eyes.
What an interesting twist in the storyline having Rafe dreaming Sami’s trying to shoot him. Why on earth didn’t Kate defend Sami and set the record straight that she saved his life? Why do I ask!
I hate when Sami reverts to childish behaviour. She’s so beyond that or should be. But she’s not. It all started when she put on that hideous Pepto bismol-pink polyester baby-doll dress she borrowed from Miss Piggy or Allie, which must have some drug baked into the hem that seeped into her bloodstream and made her cracked more than usual. She appeared coked up with that weird energy and desperate need to know what’s up with her brother, and then to top it off, had that childish outburst with EJ about "stupid" Gabi, Kate, and Cameron keeping her away from Rafe. Maybe she needs some of JJ’s weed to relax. But childish or not, it's a shame her innocent and sweet visit with Rafe turned out so poorly. At least the doctors said the longest Rafe’s memory issues could last is six months.

EJ and Sami’s portrait is a stinker.
I’m not a fan of renovating sets because of the nostalgia and, well, you saw the portrait. EJ spoke of renovating that great room in the mansion but I like the antique look of the place. It’s fun to laugh at how many women EJ has had on that uncomfortable looking sofa and it feels good to reminisce about Tony riding his horse inside that room or Rolf running into the kitchen whenever someone dropped by to see Stefano. Plus, they’ll lose all of their mausoleum jokes if they turn it into just another cheap Ikea room.

Anger sex.
This seems to work well for EJ and Sami, and their passion is wonderful and sexy, but the vile names they call each other are a huge turn off. I’m not sure the writers can or want to write a sex scene for them without having them treat each other like s*** first.

Family.
Kristen’s allegiance to ‘whomever comes out on top’ was no surprise but made me a little sad for the DiMera family. For someone who is portrayed as intelligent, EJ wasn’t too bright this week allowing his sister to live at the mansion knowing she isn’t on his side.

Chad?
What’s up with Chadsworth? He fell? Is he okay? Is he finally getting his own storyline?

Which team are you on?
The takeover of DiMera Enterprises was an odd storyline to be on the backburner and there was so much missing I didn’t know what was even going on nor did I care. I like both characters but Stefano is the biggest villain on any soap especially "Days," and considering EJ can be dense at times, my allegiance will always be toward Stefano though I dislike having to choose between the two! What say you?

Random.
They could have used any couple to portray forgiveness such as EJ and Sami, but I love that the show chose something so off the wall when Kristen watched the random Ken and Barbie couple mooning over each other and Barbie forgiving Ken for being late. These ‘WTF’ moments are fun. Odd but fun!

That blasted video!
We all thought Sami got off a little too easily with murder charges. She’s just not that lucky, and now with the video of her attacking Bernardi showing up on Adrienne’s cell phone, Sami can kiss life as she knows it goodbye. Gah!

Read this week’s Matt’s Musings on DOOL. A taste: "Across town, Adrienne was in a tizzy about her son prematurely aging thanks to his joining the poop patrol. She went around town arguing with everyone she could about this."