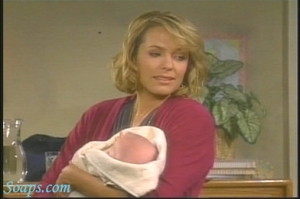 Eeek! Scary birth scenes. Why isn't she ever nominated? (Soaps.com)

Baby storylines aren’t my favorite. Baby switch storylines aren’t my favorite. Recycling, if it has to happen, should be fantastic. I don’t see these writers doing a better job than what was done with the Kristen/John/Susan baby switch storyline. Highlights of the week? Mia and Sami had baby girls, Daniel and Chloe had more sexual high jinks and Chloe started a mashed potato food fight.

About our baby switch storyline. Are you sad for Sami or is this a classic case of “What comes around goes around?” Do you want Ecole to have Sami’s baby?

We’ve had a lot of discussion in the boards regarding who Sami should be with, who she should bring up her kids with, so let’s take the vote!!

I find my interest lacking with all of the storylines. There is little that makes me giggle and more that annoys me, if I’m to be frank. Let’s get to it.

Sami, Sami, Sami
Before Sami gave birth, she was worried about Rafe so much that as usual, she almost risked her and her family’s security to go out looking for him. But that’s not all! Christians everywhere must be chomping at the bit to yell at the writers for having a nun A NUN lie for Sami. A nun! It was a comical abomination. My jaw dropped at this scene.

Then Nicole set the wheels in motion for Sami to see Dr. Baker for the baby’s birth. Oh! It’s just came out so contrived. It always does. Sami almost caught Nicole at the convent. Both Sami and Mia had their baby daughters at the exact same time, leading to their baby switch storyline. I thought Brookville Hospital was a hospital. I gather that was just my mistake. It’s a clinic. So that’s why Sami couldn’t have a cesarean section. They had no Operating Room! So shouldn’t they have shipped Sami to the nearest hospital just in case something was to go wrong? During all of this, both Rafe (who was fighting with “the killer”, and Sami, were having flashbacks of starting to care for each other. Obviously, since the writers want us to see this, it means something. A connection of some sort. What that is, we’ll see sorted out, soon. I still recall reading Dena Higley’s blog. She tells us Sami and EJ are “endgame”. So is she talking in terms of weeks, months or years? And one has to wonder… Sami did call Lucas, somebody who she does trust, to talk to, from the convent. She didn’t call EJ and she still acts as though she can’t stand EJ. How will that change?

The birth x2:
While Sami’s birth was horrendous to watch, (All that guttural groaning, hair askew, red face…. UGH! Well done. How come she has never been nominated for an Emmy?) Mia’s was practically a walk in the park – she had a difficult time, but she had never given birth before, either. Sami has, what…four times, now? I had an outburst of laughter watching Nicole shove the kid into a drawer. Classic! I didn’t know whether to laugh or be appalled. Did she do this because of Mia’s story about her mother putting her in a drawer when she was a baby?

Dr. Baker and Nicole
In what was the longest dialogue ever, Nic finally convinced Dr. Baker to let her keep Sami’s baby and gave Mia’s child to him to pawn off on Sami. This is so bad. So bad. I cringe when I think of it. It’s bad enough she’s switching Sami’s baby but she made a promise to Mia to care for her child. It doesn’t get much more despicable than that!

These long monologues from Nicole are a bit too long for my taste. You know I love Nicole, who is mad as a box of frogs, but I’m annoyed constantly at how long it takes for her and Dr. Baker to get anywhere with their long winded discussions. Talk talk talk talk…just get it out. Here’s what should have happened at the hospital, Friday. “I want Sami’s baby and I’ll report you and make your life hell until you give me what I want.” She picks up the kid, switches it with Mia’s kid. “Is that understood?” She leaves, taking the kid with her. Instead, they blah blah blahed their way through scene after scene as I became more irate.

“The Killer”
Rafe and “the killer” (I’d liked if they’d have at least found out his name by now.) had a face off for the entire week until Rafe finally stabbed “the killer” and put him in the hospital. This was real time stuff. Bored me stiff. In the hospital, it took me a while to figure out why Kayla remembered him. Likely from the police sketches Steve showed her at the pub a few weeks ago. She’s got a good memory! *wink* From the looks of it, (and we’re getting into spoiler territory for this one line) the killer’s going to try to strangle poor Kay next week and shoot her. She’ll be hanging by a thread.

The cheater and the doctor, who wants what’s taken.
A woman torn. I think that Chloe is in love with both Lucas and Daniel. Daniel watched Chloe and Lucas and their little family through a window outside the pub and suddenly developed standards. He decided to give Chloe a call and let her go, over the phone. She didn’t like that and went to him to harass him about it, though she thought it was a good idea to stay away. Really, she went back to get more action. Obviously. Valentine’s Day is two weeks away. That’s when Lucas is to marry Chloe and her cheatin’ heart. I doubt it’ll happen. Hope it doesn’t happen, I mean, did you see these two teaching their children to food fight? Bumbling fools! I think everyone will find out about the affair and Kate will turn on Chloe in a heartbeat. Tsk! (Actually, I know exactly what’s going to happen!) Which reminds me. Didn’t Kate think Chloe wasn’t good enough for Philip, just a few months ago? And now she thinks Chloe’s perfect for Lucas? Heh! Wait…

On to Daniel. Remember, we discussed how he could be attracted to those who are ill? His conversation with Victor gave us a little insight into this, as did his argument with Kate, when she visited him at home. Daniel told Vic that he always wants what he cannot have, and as he said it, he looked at Chloe. The look on his face did show he cares for her for more than a piece. But that’s not all. Does this mean that he doesn’t always want women who are ill, but he merely wants what’s out of reach? Kate tried to psychoanalyze him but he didn’t take kindly to that and told her they’re now doctor/patient. The problem with that is, Kate’s got deep feelings for Daniel. This means when she finds out he’s sleeping with her daughter-in-law-to-be, steam will come out of her ears. I feel for her.

Poor Steph and Philly:
They’re already succumbing to relationship boredom already. Somebody please kick things up. Throw Melanie at him soon, so that we can root for them once again or for Melanie and Philly. Don’t knock it just yet… you may find you like them together. Remember that hot dream Philly had of her when he fell asleep at the hospital, waiting for Kate?

I didn’t like how Philip took the time and effort to plan what sounded like a lovely dinner in Chicago, but Stephanie, who feared he was – gulp – exhibiting normal behaviour- trying to impress her, (he’s a guy) refused dinner with him. Instead, Steph took him to her old boyfriend’s bar! Burn! What’s that about? Why a dive like that? How uncivilized. They could go on a cheap, skid row date the next time around. *wink* Sadly, in Salem, there aren’t many ‘date’ worthy places to go. I’d like to see these two overcoming something, just because they’re so stale.

Back on to Melanie…. I found her time this week with her brother to be really….well, cute. They’re sweet, in an odd way. We also got to see her interact with Brady. We learned that behind the scenes (not a fan of this) she’s been working closely with Brady for weeks. She’s plotting to pit the DiMera and Kiriakis families against each other to find out who will give her more money for her fuel project. She’s a spunky girl! I like that, but she’s playing with the big boys and I don’t think she realizes this.

Before I take off for the weekend, I wanted leave you with a quote from “bghwme” who is a poster in our message boards.

"The rumor is that there will be a big "whodunnit" in March sweeps and that the murderer will be another vet who is going to be let go.

I think Ken Corday is the murderer...."

And with that, I’ll leave you to your Superbowl parties!
- Christine Fix

Days of our Lives' Taylor Spreitler...

Thaao Penghlis Speaks Out About Days...