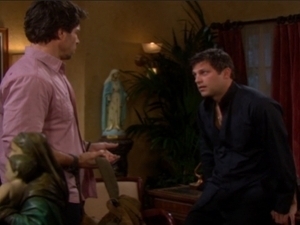 The end of Nick and Gabi? (NBC Universal Inc.)

Deconstructing “DOOL” from July 1 – 5
Hello “Days of Our Lives” fans! Dustin Cushman here filling in for Christine this week while she’s on vacation. For a holiday week for us here in the U.S., the show sure packed a lot in when it could have been a lackluster week. From Kristen’s homemade video, to Sami’s hearing, a lot went down. Let’s get into what happened in Salem.

Kristen’s cut-n-paste job.
Kristen continued her master plan this week to pay Marlena back by ruining Eric’s life. She probably had the best line of the week when she said it was a shame she couldn’t use Sami because Sami didn’t swing that way. For the life of me I can’t figure out what Kristen plans to do with her video masterpiece. I don’t know how she will make anyone believe it wasn’t heavily edited. I also don’t how she plans to explain her presence in the video? Dr. Daniel already suspects Eric was poisoned, and Eric’s memories are slowly returning. It seems to me the only thing Kristen will get is jail time once everyone figures out what really happened. Then again, DiMeras never go to jail, so she must have another trick up her sleeve. Lets hope she doesn’t end up magically pregnant and not know who the father is. Unfortunately that is exactly what I think will happen, and she will attempt to pass it off as Brady’s.

Jennifer’s eyes are partly open.
I didn’t think I could dislike any character more than Nick, but then they brought JJ into the mix. Fortunately after his latest arrest for shoplifting, Jennifer’s eyes have been open to her son. However they are only half open, as he seems to still be able to masterfully manipulate her into letting him off the hook for punishments she’s given him, and finding ways to keep her away from Daniel. One of these days JJ is going to end up in serious trouble, on an operating table and Daniel will be the one to save him. At this point he may have more people rooting for Daniel to let him die should that day actually come.

It can’t be that easy for Sami.
The grand jury decided not to indict Sami for Detective Bernardi’s murder. We all know this is far from over, Sami’s luck is just not that good. Bernardi’s widow already promised to make Sami pay, so Sami better be on guard. Will she try and kill EJ, taking Sami’s husband-to-be away as justice? She wouldn’t be stupid enough to try and kill a DiMera, would she? That would leave Sami or Will as her target. There is always the chance that video of Sami chasing Bernardi will surface, and then they will bring her to trial. However my money is on Will. She will somehow find some of the evidence Bernardi stole and send him to jail. After months of Will worrying he’d be going to jail for shooting EJ that storyline isn’t going to just be dropped.

Where has the mysterious razor blade has gone? Obviously someone on Stefano’s payroll made it disappear. It would just be nice to be told how and who did it for peace of mind. It’s actually driving me bonkers. Speaking of Stefano’s payroll, did nobody ever think to check Bernardi’s finances? Sami’s accusation painted him as a dirty cop, so why didn’t anybody check into that? Oh wait that would mean Salem PD would have to work!

Nick And Gabi: Breaking up is hard to do.
Nick made some good decisions this week, and one very bad one. First he returned a formula he developed for Kate to try and make up for EJ and Sami stealing his other one. He knew she wouldn't hire him back, but it was the right thing to do. Personally I wouldn't help Kate even if it was the right thing to do. The show really wants us to believe he's trying to reform. Then he told Gabi they needed to dissolve their marriage, that it's not right for them to be married with all the lies he told her. I don't think they are over by a long shot, though Gabi sure didn't seem to waste any time in flirting with Cameron now that she was single and free. Do you think Nick did the right thing in breaking up with Gabi? Take our poll this week!

Unfortunately Nick, out of a job, decided to go into business with Vargas. Really Nick? We all know when this blows up, and it will, Vargas will leave Nick looking like the guilty party. For a supposed genius, Nick sure makes a lot of dumb decisions.

Adrienne and others put doubts in Will's head.
Throughout the eighties Adrienne and Justin were one of my favorite couples, and I always felt for Adrienne given her past and the obstacles Uncle Vic put in her and Justin's way. That's one reason I was so glad that Justin reminded her of their own past this week given all her meddling into Sonny and Will's relationship. She's quickly becoming one of the most annoying characters on this soap, next to JJ that is. It seems she's trying to take over Maggie's role as the town meddler.

Then there is Sonny's friend, telling him he can't really want to be tied down with a kid who’s not even his when he should be out partying. Of course Will overheard part of this conversation and now worries he's keeping Sonny from living a fun life. He doesn't know Sonny is happiest with Will and Arianna Grace. Sonny's a good guy, especially since it seems he's the only one in that house taking care of the child. Will and Gabi seem to just be running all over town and leaving him home with her. Will and Gabi better step up otherwise Sonny may actually jet on them both.

That's all for this week. Be sure to read Matt Musings on DOOL.