Jenn should have let JJ spend the night in jail.
Does that work still? Scaring kids straight? How do you scare parents into not spoiling their kids so they don’t turn out to think life owes them? JJ and his friends created quite the stir shoplifting, airing out their stash for all to see, ripping out tree limbs, and slushying (new verb) Alice and Tom’s memory plaque. The pièce de résistance was the shopkeeper who "just happened along" at the right moment and saw her goods spilled out of the boys’ backpacks... All in all, a hilarious scene. Matt and I agree the shopkeeper should be on the show more often and should become the landlord for "GabbaWilSon," as Matt says, "and be their Mr. Roper."

Jennifer finally got a clue and stopped making excuses for her son. It hurt and wasn't easy to see her sobbing, but she's better off knowing what her kid is really about so she can help him... or throttle him...Either way!

Poaching on Cam’s 'territory'.
Chad and Abigail went to Whoopie World and rode the wild tiger. He blurted out later that it wasn’t the only wild tiger he wanted her to ride. Cam found out about his competition and gave her an ultimatum. I guess it’s better than sharing her like Jack and Daniel did with Jennifer. It’s sad that Cameron is still a stranger in the mix. Even Abe snubs him. We're weeks into this storyline and there still isn't much of a reason to want Abby to be with Cameron other than he's maybe more mature than Chad. Jennifer keeps ranting at her daughter that Chad’s a bad person but I���m not sure that rings true. What does he do that’s so bad except poach on another dude’s woman?

Anne!
Anne reminds me of my first introduction to Sami. You either hate her, love to hate her or just plain love her - even though she's an ass! This time it was a surprise that Daniel actually put her in her place.

Adrienne's apology.
Are you buying her apology? Give it a few days. It's likely she'll be back to pulling the 'overprotective vibe' again.

With that, I'm off on holidays. Leave me a comment with your own thoughts on this week in Salem and next week you're in for a treat when Dustin Cushman takes over Deconstructing "DOOL" while I'm away.

Be sure to read this week’s Matt’s Musings on DOOL. Sneak peek: "Will, Sonny and Gabi settled in together at their new pad. She said it was just like 'Three's Company' with a baby. If that's true, I wonder which one of them in Chrissy." 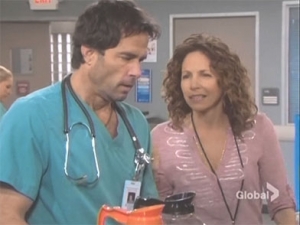 This week, JJ added ‘thief’ to his ever-growing list of bad boy attributes, Jennifer removed her rose-coloured glasses, Will and Sonny bid farewell to their carefree youth, Sami’s about to face the grand jury, and yet the storylines didn’t progress too far this week. Let’s break it down.

Horny priest.
Half of the week was spent in ‘the capital’ – which was either Washington DC or Springfield. It took moments to get there from Salem so we’ll assume it’s Springfield, especially since Nicole was actually able to get the EMS to drive their ambulance all the way to Salem just to cart Eric there to see Dr. Jonas. It seemed rather implausible. At any rate, it’s almost as unclear as what the drug is Kristen gave Father Eric to make him appear sick and then aroused so she could rape him. Likely some form of Rohypnol mixed with gawd knows what else. Since nu-Rolf created it, who knows what other toxins are in it or what other side effects are in store for the priest! It worked well. Eric, a priest, became aroused enough to have sex, aroused enough to have sex with Kristen DiMera of all people. Yep. It’s better he doesn’t remember that. Can you imagine what it’d do to him? I’m not sure the bishop would believe he was drugged if he saw the sex tape especially with all of the editing Kristen did to it. And that’s not all. He’s now a priest with attitude. Er… more attitude. Hey at least now Father Eric and Nicole have something in common. They both have sex tapes.

It’s good to see the hotel Father Eric stayed in had such wonderful security that Nicole could just grab a key card from a nearby housekeeping cart and let herself into his room!

Miracle?
Father Eric decided a miracle occurred when some guy named Hanley decided to give him the permit to go ahead with the school but it was no miracle. It was Nicole’s powers of persuasion and manipulation. Maybe now that the permit came through for building the school, they can stop talking about. This isn’t “Little House On The Prairie.”

Speaking of naps.
Gabi moved in with two gay guys and called it ‘”Three’s Company” with a baby’. Not so far it isn’t. Neither Sonny nor Will is campy and Gabi’s pretty conservative, so it hasn’t and likely won’t be anywhere near funny. So far it’s all about whether or not Arianna slept all night, whether or not Will sleeps more than Arianna, how much rest Sonny has had, Gabi’s napping habits, and how much sleep we all caught up on while watching those scenes.

It’s not as though he’s a party animal by any stretch of the imagination but how long is it going to take before Sonny gets bored with playing house? They’re all so young and it’s really sweet that he wants to help raise Arianna. The situation may sound good on paper but it’s a soap. This can’t last!

Days of our Lives Spoiler Video: The Best Ideas