What the... Where is John coming from?
It’s truly shocking that John has feelings for Kristen, after all that she has done not just in the past but the present. When did he start having feelings for her and how is it possible? He knows she hasn’t changed, knows that she gets a kick out of hurting him. It’s difficult to buy and more so because he hasn't unloaded to anyone about the details of this horrendous turn of events. Marlena’s hurt which is understandable but I disagree with her assessment that he’s worse than Kristen. What he did was moronic at best but his heart was in the right place.

At least Marlena finally has a useful son to talk to about her problems. Yep, that's what she said. As they say, "Snap!"

So many questions.
Is Rafe a good influence on Kate? Kate actually offered to house Gabi and Ari, which is nice, but where? Where does Kate live and why doesn’t Gabi just move into Rafe’s loft? Sure, having Ari’s parents under one roof is preferable but there’s a concern that the writers will jumble this up instead of making it entertaining or dramatic and not turn WilSon into old men before their time.

Where should Gabi live? Vote!

Cat fight.
The slap-fest wasn't exclusive to Marlena and John, Mrs. Bernardi and Sami. Nicole and Kristen finally got some airtime together. Kristen's jealous rage and Nicole's taunts about being available if Brady wants to bury his "rage" made for one of the more 'adult' cat fights to date. More of this, please. And Nicole meant business. Though we know she and Brady can be bad for each other, they've always been pretty sexy together.

What will happen to Rafe?
Galen Gering tweeted this on June 12.

The tweet was removed shortly thereafter and the same day, Galen’s wife Jenna posted a note.

@jennagering Rafe in a coma. Time 4 me 2 make the doughnuts. Got new pics. Off 2 first casting in long time 4 Botox! #mommodeling

This is disappointing considering Rafe’s in a coma now and the show is filming at least four months in advance which means Galen must be talking about having no storyline four months from now. That doesn't sound good. Rafe’s a likeable character and Galen’s proven he's a good actor who could be used in many of the storylines. First Bryan Dattilo is bumped to recurring and possibly Galen, too? Is it the curse of being one of Sami’s former lovers? Should James Scott (EJ) worry?!

Your votes counted! Here are the winners for the 7th Annual Sudzies Awards!

Read this week’s Matt Musings on DOOL. A taste: "Nicole dragged Brady to the bowling alley in the hopes that indigestion and some old borrowed shoes would make him forget his nausea over being out-played by his father's ex." 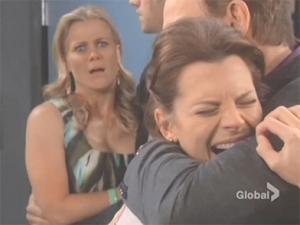 We were shocked by the shooting, rocked by John’s admission, felt the pain of the many faces being slapped all week, and are happy the show gave us another big storyline so soon after Sweeps. It was a pretty good week. Let’s break it down.

Who saw that coming?!
Sami shot Bernardi! We’ve been waiting for her to use that gun since Kate gifted it but none of us saw this coming. Kudos to “Days” for keeping this under wraps.

We know Sami didn’t know the man standing over Rafe with a knife was Bernardi, but that won’t hold up in court. If it comes out that she was running after Bernardi at the square a few weeks ago and someone saw her attack him in the park, it’s going to look worse than it already does. Unless like me, they were too busy watching that crazy dancing lady to notice. I digress. Sami being Sami, never thinks before she reacts but would we have done the same? Bernardi being one of Stefano’s goons is a halfwit. If he would have sliced rather than lifted his arm to stab, Sami might have put her gun back in that suitcase she calls a purse.

EJ once again displayed an extraordinary amount of jealousy. Did he prefer she let Rafe die or as he told Sami in front of Marlena, did he feel she did the right thing? It’s hard to tell which he really feels but it doesn’t seem as if he has anything to be jealous of. She’s in love with him and why wouldn’t she visit Rafe? She still cares for him and feels guilty about the state he’s in. Did anyone else notice Sonny and Will took the news of Sami shooting a cop rather well? They mostly just shook their head. Just another day in the life of Sami Brady.

Best line: “Don’t touch anything until the police come.” Could it be? Are forensics worse than the Salem police?

Questions: Who swiped the weapon? A cop or a paramedic? And did you imagine Stefano bronzing Rafe’s penis to keep as a souvenir? Ew.

Dannifer.
I felt for Jennifer when she learned her son was a juvenile delinquent. Even though her parenting skills are spotty with JJ, it couldn’t have been easy to find out that a Horton spawn isn’t perfect. She’s lucky Daniel’s so understanding. It was fun to see Anne return as her mean old self, looking to take Jennifer down. Surprisingly it hasn’t gotten old.

If you were wondering why JJ always makes his friend Shaggy run out through the back door of the Horton homestead whenever someone arrives, the answer was pretty clear Friday during his ‘conversation’ with Abigail. And just how much ganja do these two smoke if they ran out of weed so fast after spending his whole summer allowance on it? Is there a weed shortage in Salem?