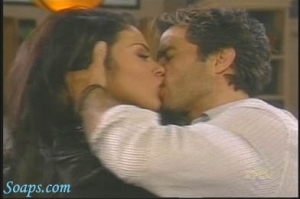 And they lived happily ever after? (Soaps.com)

The show has been rushing at warp speed to end the John and Marlena storyline in order to retire these characters. It went too fast for me. I think the characters and the fans deserved a little more. I feel cheated by how fast the story went and thought that there could have been so much more story to tell, especially with Dr. Charlotte Taylor. I really love Marlena above all. She’s what tuned me in to the show, in ’94, so she’ll be missed. At least there is room for their return, someday. The Charlotte story could have opened up yet another storyline. I’d have liked to see it play out differently. Charlotte went a little around the bend growing up in the shadow of Marlena. Her bitterness at not getting enough attention from dear old dad, (Dr. Kenneth Taylor, Marlena’s mentor) turned to resentment of Marlena. We longed for Charlotte to be somehow related to Marlena. I had hopes she’d stick around. She injected John by accident with muscle relaxant, so now he and Marlena had to move to Switzerland to a facility for John. Their sendoff was heartwarming if you force yourself to suspend disbelief more than usual. If you don’t force yourself to believe, you’ll find it mediocre and find yourself just glad it’s over. At least you don’t have to summarize it. *wink*

Odd point about this week was Stefano’s reaction to John’s destiny and then in the hospital, his salute to John. I’d like to hear your thoughts on this. I’m also wondering if Brady will be prosecuted for breaking into Charlotte’s office. Check out an article written in honour of Jarlena! Video clips included.

This week coming is all about the birth of two babies. Sami and Mia will give birth. Mia has already had Braxton Hicks once. Since EJ took off on business to Italy, Nicole has room to fake giving birth. She’s making me nervous. EJ has no real reason to mistrust Nicole. His annoying demands come from being brought up by Stefano. He wants to protect Nicole and their baby and wants to be there for the baby’s birth. Too bad he won’t be, but his trip did make it easy for Nicole to hide more lies. What if EJ were to call the youth center and find out she doesn’t work there? What happens if EJ finds out Nicole knew where Sami was? Chloe accidentally blurted out that Sami was pregnant with EJ’s child, and Nicole went to see her. Nicole has become more desperate, and it can only get worse from here! Finding out that not only can she never have a child with EJ, but that Sami is pregnant with his (it’s going to be a girl) daughter is going to drive her over the edge. The scene also showed a softer side of Chloe, that we all needed to see, now that she’s breaking Lucas’ heart.

Best line? Only Nicole could lie to a nun. No. Scratch that. Sami could do the same! Nicole lied to EJ right in front of Sister Theresa, who called her on it. Nicole says, “I’m not lying. I’m rearranging the facts. And I need your help!”

Sami and Rafe had to run from the killer, so they went to the convent, where Sami wanted to be anyway. Predictable. Sami felt that Hilda’s death was her fault. It’s not. It’s called a crappy FBI agent. To me, Hilda would have been able to outsmart the killer. (I wish he had a name.) What a letdown. Sami confessed to who she really was to Sister Theresa, which spooked me. I guess she felt that if you can’t trust a nun, who can you trust, but I disagree. Course, Sami doesn’t mind wandering about in the public eye when she’s in a safe house. I, on the other hand, wouldn’t – and I doubt you would! (Reality vs Soap!)

The couple wandering away from the public eye is Chloe and Daniel; however, after having sex again on Thursday and professing their love for each other, things could soon change! Is it just me or did the L word come out of nowhere? Seemed it was just physical, to me, considering they barely know each other. No doubt that their sex scenes are hot, and I’m sure gave the ratings a bit of a boost. I’m still not routing for this couple but at least Daniel doesn’t seem as obsessed with Chloe, now that they’re in love. This isn’t going to play out well for Lucas, but will it work out for the sexy couple?

Stay tuned to see a little more of Steve and Kayla and more of Bo’s visions coming. Kayla is in danger…

Days of our Lives Video Clip...