EJami.
Sami to EJ, “I would hate to be your enemy.” Gah! She was his enemy for years on end. She knows what it’s like! Maybe it’s time we allowed these two to move on from their past, because this dialogue puts us right back in the rape, Sydnapping and shooting days.

Of course Sami’s still going to have feelings for Rafe. She flitted back and forth between Rafe and EJ for a while before finally settling on EJ as a long-term partner. You can’t just shut feelings off, even when you are falling in love with another. The question is, what kind of feelings does she have for Rafe? Was her outburst, “What Rafe and I have is worth more than anything you could have with anyone,” a simple misuse of a word, Sami just not being accustomed to talking about her and Rafe in the past tense, or was it a Freudian slip? Either way, these two need to take a little time to overcome any issues before taking the next step toward marriage.

Throw Sami under the bus?
Kate accused Sami of stealing her anti-aging formula from MadWorld. Not EJ. Sami. Sami responded as if Kate was accusing them both. We all know that EJ is the one who did it and it’s unclear as to why EJ kept it from Sami, but it didn’t matter to her. She got hot for him after he admitted to committed espionage, which was a little creepy but not unusual for them. One concern. What happens if Kate takes Sami to court? What if Kate can prove it was a stolen formula and Sami’s incarcerated? Will EJ out himself for her or throw her under the bus?

Paging Dr. Davis. Oh wait. Forget that!
Could Dr. Cameron Davis be the worst doctor in Salem? If Dr. Daniel Jonas was on duty and found Rafe’s monitor turned down and some wires pulled out, he would clue in that there was a big issue, not merely fix it, shrug, and leave. Cameron’s always blathering on about how he wants to be like Lexi. He’s not off to a good start.

There is still a few weeks! vote in the 7th Annual Sudzies Awards.

Read this week’s Matt Musings on DOOL. A taste: “Samanther refused to believe that Rafe could have had tender feelings for Kate. The women compared bedroom notes. EJ eavesdropped, waiting to hear if he at least came up as a footnote in this discussion.” 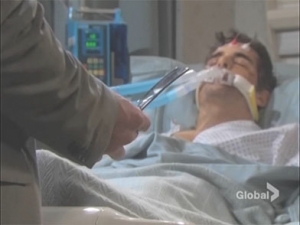 This week may have been short due to the French Open, but there wasn’t a shortage of things to poke a little fun at…

Sick.
Stefano has it so bad for Kate, he’s so jealous that wants Bernardi to go to Rafe’s hospital room, while Rafe’s still in a coma, and “cut it off?” Is ‘it’ seriously Rafe’s willy? This isn’t new to soaps but it still garners the same shocking reaction! On “Passions,” Julian’s penis was cut off and a stoned Eve sewed it on… though backwards. Still, it’s hard to believe “Days” would go there. Oh the controversy! Hopefully Bernardi is caught before he does ‘the deed’. Ew.

Chad’s sexual innuendos.
Chad and his pompahawk were fun. He claimed he ‘forgot’ he and Abigail were going to “Whoopie World.” A theme park – not his bedroom. Then, he told Abby that he was sure he could find a dozen people who would love to ride “the wild tiger” in her place. While that sounds promising for Abigail if she decides to lose her virginity, the wild tiger was likely just a roller coaster. Loving their scenes but feeling bad for Cameron, who obviously sees that Abby’s attracted to Chad still.

There’s another sexual innuendo in the below dialogue that makes me smile.

Cameron: So, you’re going out with Chad?

The blame game.
Sami and Hope commiserated over being rotten mothers who ignore their kids. No sympathy from here except for the poor children. There’s a debate in the forums about who is to blame for Ciara hiding that prison release notice. There’s a list of those who can claim at least partial blame.

* Whoever got Jensen out on a technicality – could have been EJ.
* The cop dropped off the prison release letter and relied on a little kid to make sure her mum knew it was important.
* Hope is never around for her kid. She let another mother famous for ignoring her children look after Ciara.
* Bo has abandoned Ciara, which has meant she’s become desperate for crumbs of attention.
* Sami left Ciara alone.

* And finally, Ciara is to blame because she was a naughty girl.

Mothers in Salem…
In addition to Sami and Hope commiserating over being terrible mothers, suddenly Jennifer’s mothering skills have left a lot to be desired. Yeah…Jennifer of all people. She gave her delinquent son enough money to spend during the entire summer and even covered his books, so that he doesn’t have to get a job that could interfere with his grades, and then when he whines/lies about inflation being the reason he didn’t pay off Daniel, she hands him over more moola? Are you freaking kidding me? And she wonders why her kid’s messed up? She just gave the little user a false sense of entitlement, impulse control issues, a lack of boundaries, the list goes on.

Rory is kind of funny. Let’s see more of Rory the stoner!

Days of our Lives Spoiler Video: Like Intense, Man!