Soaps.com: How do you think Kristen will react if Brady continues to turn to Nicole for comfort?

Davidson: I think that would be a crazy-making move. That would make her nuts. I don’t think she shares well.

Soaps.com: Do think she is still holding out hope for a baby with Brady?

Davidson: Absolutely. I mean if she thought that it was at all possible, and he showed her that it was, she wants to go back there and see if that could happen.

Soaps.com: Can you give us any hints of what is up next for Kristen?

Davidson: Well, I know she was going to be working very hard to get Brady back. And, also, getting even. So that kind of sums up her whole life.

Soaps.com: Were you able to spend any time with your costar from "Y&R" Jeanne Cooper (Katherine Chancellor) before she recently passed away?

Davidson: I wasn’t, no. I haven’t seen her in a while. Right after she passed I was on my phone looking for photos, and I found a photo of her and Michael Fairman taken with me on my last day at "Y&R" a year ago. I just happened to take a picture of her on set. I loved her dearly and she was a very sweet woman, a very interesting multi-layered person.

Soaps.com: Are you working on any other projects outside of "Days?"

Davidson: Not really. The show is keeping me pretty busy nowadays.

Soaps.com: We can't wait to see what is next for Kristen.

Davidson: Thanks for hanging in there and thanks for coming along for the ride. I know it has been quite a roller coaster.

Check out all of the dramatic footage from the submitted scenes from the 40th Annual Daytime Emmy Reels. Then get to know Davidson’s costar better in Soaps.com’s Interview with Camila Banus.

Join us on Twitter @soapoperafan, and Facebook. Come tweet and Facebook with us about "Days of our Lives" all the other soap operas, "Dallas," "Glee," "Grey’s Anatomy," "Pretty Little Liars," "Revenge," "Vampire Diaries," and "Venice The Series." 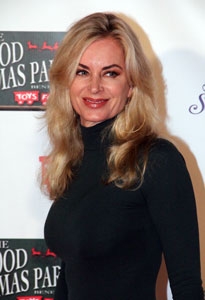 “I think in many ways she has moved on from him.”

One of Daytime’s biggest stars, Eileen Davidson, left Genoa City last year as Ashley Abbott on “Y&R” and moved to Salem, reprising her role of Kristen DiMera. Her first order of business? Tearing John (Drake Hogestyn) and Marlena (Deidre Hall) apart with a little help from an unwitting Brady (Eric Martsolf). It appears she has succeeded – for now – but her plotting has had some serious side effects, namely, a true love for Brady. Davidson talks with Soaps.com about Kristen’s real feelings for John, how she gets ready for an emotional scene and whether she plans to end her crusade against Marlena and John.

Soaps.com: Our readers wanted us to know how much they enjoyed your scenes this week.

Davidson: Oh, thank you. I appreciate that.

Soaps.com: So what is going on in Kristen’s head now that Brady has dumped her?

Davidson: She wants to get Brady back. That would be my best guess. And try to convince them that she really loves him.

Soaps.com: So is she picking Brady over revenge?

Davidson: It is probably a nice combination of the two. Whichever pays off first maybe.

Soaps.com: Do you think it is possible that Brady could forgive Kristen in time?

Davidson: Possibly, since she was telling the truth that she chose her love for him over revenge. And John happens to know that that is the truth – that she walked out.

Soaps.com: We loved those heartbreaking scenes you had with Brady this week. How do you set yourself up to do those kinds of emotional scenes?

Davidson: I have a very clear point of view where Kristen is concerned. I know how she feels about Marlena. I know what Marlena took from her. Kristen knows what Marlena took from her so it is a very clear thing to play. The same thing with trying to convince Brady that she loves him. I don’t know how to describe it. You just find out what needs to be accomplished in the scene and then you do whatever you can to pull that out of yourself so you can meet that goal.

Soaps.com: So does Kristen really not have any more feelings for John? It has appeared a few times over the past few months that she might still carry a torch.

Davidson: I was kind of back-and-forth over the last few months with that, and basically she has attraction for him. And she wants him to want her, especially after all those years when she was rejected by him. But I think in many ways she has moved on from him.

Days of our Lives Spoiler Video: Zipping The Lip