Nick’s redemption:
As we suspected, Nick was raped and beat repeatedly by Jensen while in prison. Nick denied it, repressed it, (likely wondered about his own sexuality) and equated same-sex rape with homosexuality. Now that Will attempted to save his life and he’s starting to face his demons, it looks as though Nick’s been redeemed. What happens next? Loads of therapy is my guess but as unhappy as he and Gabi are, does Nick have any feelings for her or are they done for good? Do you want Nick and Gabi to one day work things out? Vote!

WilSon’s romance:
Will and Sonny have come a long way since Sonny admitted he didn’t want children. These two bonded over Sonny being the one to help deliver Arianna and over how Arianna looks like Will. It was heart-warming. A Twitter follower commented, "The dissimilarity between happy WilSon and unhappy Nabi is very striking!"

There is still time to vote in the 7th Annual Sudzies Awards.

Read this week’s Matt Musings on DOOL. A taste: "He analyzed himself better than Marlena ever could and told Gabbah that what he felt for her was likely just a desperate illusion. She was confused about whether that meant he actually loved her or not." 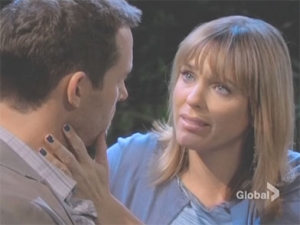 Short week since “Days” was preempted Monday. The current storylines have wrapped up; the show was on fire mid-week, and we’re all wondering what comes next. Here are a few thoughts…

Kristen’s epiphany.
Kristen returned to Salem with revenge on the mind. She didn’t expect to fall in love and once again she was dumped practically at the altar when Brady learned she played him. Knowing she did this to herself didn’t detract from me feeling sorry for her… in between gales of laughter at her crawling around on her hands and knees…Eileen’s an acting goddess. Any bets on how quickly Kristen will become obsessed?

Soaps.com spoke with Eileen Davidson today about Kristen. Find out what she says about what comes next!

Do you remember? This exact same scenario at the DiMera mansion played out between Stephanie Johnson and Nathan Horton in his apartment in January of 2011 when she too begged him not to leave her. Salem has a lot of desperate women.

What comes next for Jarlena?
Now that Brady has left Kristen, John somehow thinks Marlena will fall back into his arms. How cracked can this guy get? In addition to the many ways he has screwed up his relationship with her over the past several months, winding up in Kristen’s bed no matter what the reason is not going to get Doc falling all over herself to reunite. It’ll be interesting to see what the writers have John do in order to win her back – if he can.

A curiosity.
What time does Father Eric go to bed at night? He woke up after having a bout of insomnia and went over to the pub where he spoke with Johnny, a little kid whose bedtime hadn’t even come yet! Speaking of Johnny, it was cute and rather observant of the little tyke to note that Nicole looks at Eric the way she used to look at EJ. That whole scene in the rectory where Eric sort of asked (not really) Nicole about her feelings for him was rather strange. He didn’t even mention what Johnny said. Nic just jumped the gun and denied caring for him which is very telling. To us. Eric’s either dense or likes to dabble in denial himself. I like to think he’s in denial. He seemed to be a little off when Nicole told him she’d be at Brady’s beck and call for the time being. And we all know what that means. If Brady falls off the wagon, we’ll likely see a Bricole reunion.

Days of our Lives Spoiler Video: Zipping The Lip