A shooting and a birth.
The Smith Island scenes played out very well. Very exciting. Nick (Oh my Blake Berris can act!) was tortured over what Jensen would do to Gabi and the baby and then Will of all people, showing another side of Nick – the one we knew before the drugs and Trent’s murder and before the homophobic garbage. Now that we know Jensen raped Nick in jail, perhaps we can at least understand where his bigotry comes from.

It was a nice touch to have Sonny and Gabi discussing their feud over the horrible things she did to Melanie in that rodent infested shed. Having Gabs feel such remorse while giving birth could go a long way toward changing the way some fans feel about her. They both did well considering their surroundings, those rusty ole scissors Sonny found to cut the cord, and Sonny being very little help though doing a decent job with the delivery anyway!

Sonny’s profession of love to Will at his bedside was very endearing though we could have done without Sami and Lucas eavesdropping on such a private moment! It just went on and on and they kept on eavesdropping. Weirdos! I digress, the shooting will likely make WilSon, the most stable couple in town, closer than ever and I’m anxious to know how this will affect Nick and Will?

EJ told Maxine that he’d recommend to the board that she get a raise because she decided to pull a Brady and go against hospital policy. It’s a stupid policy but to reward someone for going against the rules? The thought was sweet though it was pretty bizarre and smug.

Brady, Kristen and John.
Poor dumb Brady. Poor dumb Kristen. Doesn’t she know that living a happy life and being in love outweighs any revenge she could take on John? And really, John couldn’t have helped the way he felt about Marlena 14 years ago or that he felt nothing for Kristen. She has selective memory about the events that happened back then and actually deserved more than just to be dumped. Besides, would she rather he stayed with her knowing he loved someone else? Oy. Did anyone else want to hurl watching John and Kristen kissing? He was so creepy. And the big question is, will Brady see that text in time?

Nicole's mortification.
Nicole's been trying to keep her feelings for Eric under her hat but she outed herself quite easily with Brady. Now what?! She was also so sweet to Eric when he needed someone to listen about the issue with the permits and the bishop having nothing to bless if he doesn't get them sorted. I also noticed he's smiling more and his hair is looking good these days. He's oozing more sex appeal. I wonder if that was the plan to hook us. If so, it's working!

Kids.
It’s been enjoyable the way the children are being written in lately. Johnny got to show his naughty DiMera side by stealing that photo of Kristen paying off Sy from Ciara. He soon felt contrition and spilled it to Marlena. Will Marlena figure out what that photo of Kristen and Sy is about?

It’s also been an eye-opener knowing how Ciara has been affected by Hope being kidnapped off and on throughout her life and watching her cope with Bo’s disappearance.

Those are my thoughts on this week's Salemites. I'd love to hear yours.

Don’t forget to Vote in the 7th Annual Sudzies Awards and be sure you read Matt’s DOOL Musings. A taste: "He got easily distracted and wandered off to search the bushes with his dead reptilian eyes." 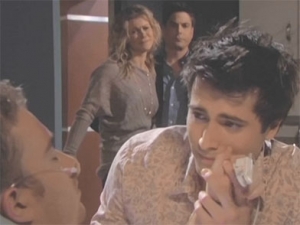 Not a bad week. Sweeps was upon us and “Days” didn’t disappoint. Friday’s cliffhanger was fantastic.

Stefano’s jealousy.
Stefano knows Kate and Rafe were an item and now has RicardBo following her in order to keep tabs on how much time she spends at Rafe’s bedside, I guess. He smashed one of his prize cigars when RicardBo told him Kate was visiting Rafe and then ran over there to eavesdrop on her telling Rafe what a perfect lover he is. Stefano had to shove his fist into his mouth to keep from a) throwing up b) laughing or c) screaming. Obviously he’s intolerably jealous but for what reason?

He knows he made a mistake dumping her and is still in love with her?
He’s raging that her lover is no other than Rafe, a man he loathes?
Though he doesn’t want her, he doesn’t want anyone else to have her either?

What do you think? Vote on what Stefano’s thinking!

If he’s still in love with her, do you think he’s too late to do anything about it? If Kate’s in love with Rafe, Stefano could be out of the picture for good.

Summer triangle.
Abby and Chad are quite playful together, and seem to have a lot in common while she doesn’t seem to be able to be herself as much with Cameron. He’s more serious and somewhat of a fuddy duddy. It’s pretty clear who she should be with if only so the audience doesn’t become bored.

JJ.
The kid needed some weed after talking to Dannifer. Oh the irony. At least Abs is pretty understanding about his woes. Jenn was right. She should have brought him to Salem when Jack died. Should have, could have… meaningless words, really. She was in mourning and as she said, JJ loved boarding school. All she can do now is be there for him and help him cope. And he needs to stop being a big baby and breaking Daniel and Parker’s sh…tuff.

Who gets high and vandalizes? Usually those high on weed are in a state of relaxed bliss.

“You smug son of a bitch.”
Hurling insults at each other sure seems to get EJ and Samanther off. Whatever floats your boat, eh? After being inundated with people who think – or – thought that EJ was involved in Rafe’s beating, Samanther finally asked EJ if he did it. While it’s not the sweetest question ever asked, EJ is a DiMera and not three months ago, he was offering to get rid of Nick Fallon, so EJ’s ‘hurt’ over Sami’s allegations that he was behind Rafe’s attack, genuine or not, doesn’t dispute that the questioning isn’t far-fetched. And EJ knows it. Justin knows it. EJ’s fun when he’s devious and though we now know Jensen was Rafe’s attacker, could EJ have been the one who got him out of prison on a technicality? It’d be just like him to do this. He does hate Rafe and Nick, and he and Jensen did give each other that lingering look at the hospital before EJ followed him into another room. Could EJ’s plan have been to get Jensen to kill two birds with one stone? Is this story really over?

Random thought: Hope’s a machine. She killed Jensen and didn’t even look back. I’m not sure if that’s a good or bad thing.